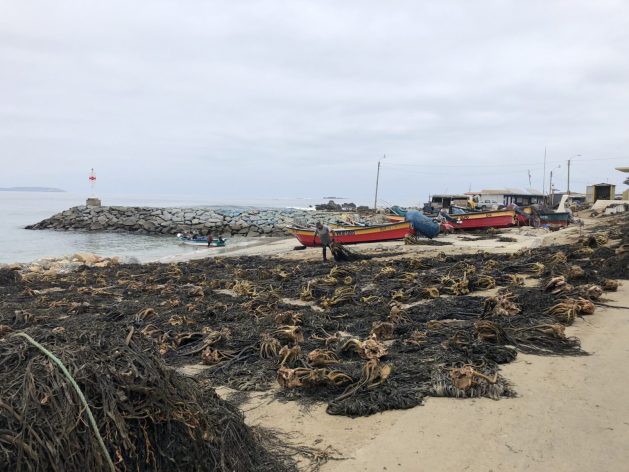 If the desalination plants win the bet, Chile's water delivery trucks, with their unpredictable schedules and high operating costs, will become a thing of the past. The photo shows the small cove of Chigualoco, in northern Chile, with a few fishing boats and the ground covered with black seaweed (Lessonia spicata), macroalgae that the fishermen dry in the sun. The seaweed is not extracted from the small coastal rocks because it is the food for prized mollusks whose harvesting season ends in June. CREDIT: Orlando Milesi/IPS

LOS VILOS, Chile , Mar 24 2022 (IPS) - The Pacific Ocean could quench the thirst caused by 10 years of drought in Chile, but the operation of desalination plants of various sizes has a long way to go to become sustainable and to serve society as a whole rather than just corporations.

Some twenty of these plants are already in operation providing desalinated water to small fishing communities, another three to the inhabitants of various municipalities and eight more to large mining companies, all but one of which are concentrated in Chile’s arid North.

The extensive development and availability of solar and wind energy has lowered the operating cost of desalinating and purifying seawater, which offers hope for a stable supply of water in this Southern Cone country with 4,270 kilometers of coastline.

This year, 184 municipalities are under a water shortage decree, 53 percent of the total, affecting 8.2 of the 19.4 million inhabitants of this long narrow country that runs along the western side of southern South America, between the Pacific coast and the Andes mountains.

“Seventy-two percent of the data shows that the water level in aquifers is decreasing at a statistically significant rate and all the glaciers studied so far, which are less than one percent of the existing ones, have reduced their areal and/or frontal surface from 2000 onwards, with only one exception (the El Rincón glacier, located on the outskirts of Santiago),” the report states. 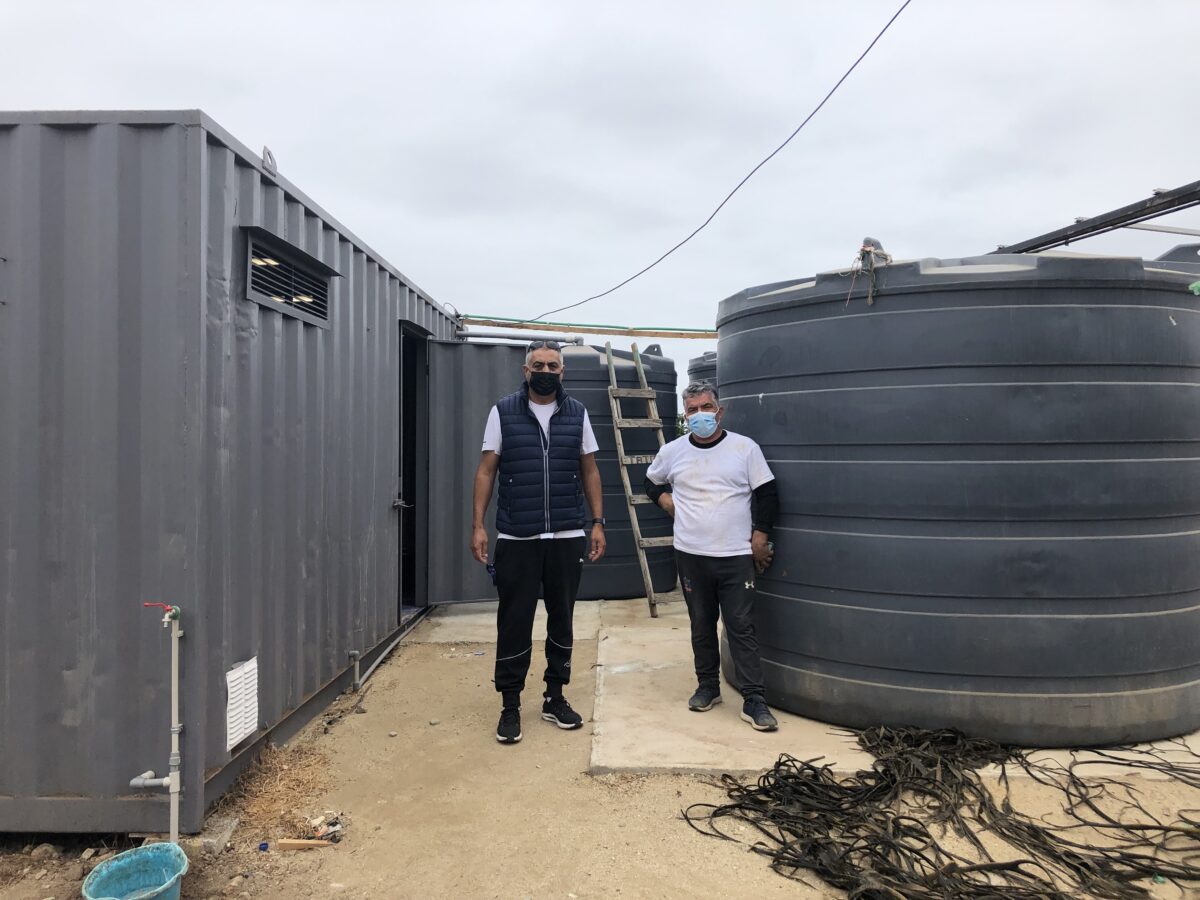 Roberto Collao (left), president of the Chigualoco fishermen’s union, and Miguel Barraza, secretary of the organization, stand next to one of the drums that hold desalinated water and next to the plant’s operating hut, located in this small fishing village in the arid north of Chile. CREDIT: Orlando Milesi/IPS

Roberto Collao, president of the fishermen’s union of Chigualoco, a small cove 240 km north of Santiago in the municipality of Los Vilos, told IPS how this technical data translates into reality and how a desalination plant came to their aid.

“We had no drinking water. We brought it from our homes in Los Vilos, 20 minutes from here. The water trucks came every 15 days and a lot of people come here in summer,” he explained in the fishermen’s cove, the local name given to the small inlets that abound along the Chilean coast.

Sitting next to the association’s boats, on a beach full of seaweed laid out to dry, he proudly said that “we are now taking 5,000 liters a day out of the sea and turning it into freshwater for consumption, for washing our diving suits and for cleaning our catch.”

In the recently concluded fishing season, the 30 artisanal fishermen of Chigualoco, who have three managed fishing areas, caught 100,000 Chilean abalones (Concholepas concholepas), a highly prized mollusk or large edible sea snail native to the coasts of Chile and its neighbor to the north, Peru.

Similar small desalination plants were installed in the northern region of Coquimbo where the town is located, financed with public funds.

One of them is in Maitencillo, across from Canela, the municipality with the highest poverty rate in Chile.

But it has not been working for four months because “the pump that extracted the salt water broke down, there were problems with the filters,” Herjan Torreblanca, president of the Caleta Maitencillo union, told IPS on a tour of towns with desalination plants in the region.

“The water we got was so fresh, like bottled water. It produced 8,000 liters a day,” he recalled with nostalgia, expressing hope that the plant would be fixed soon. 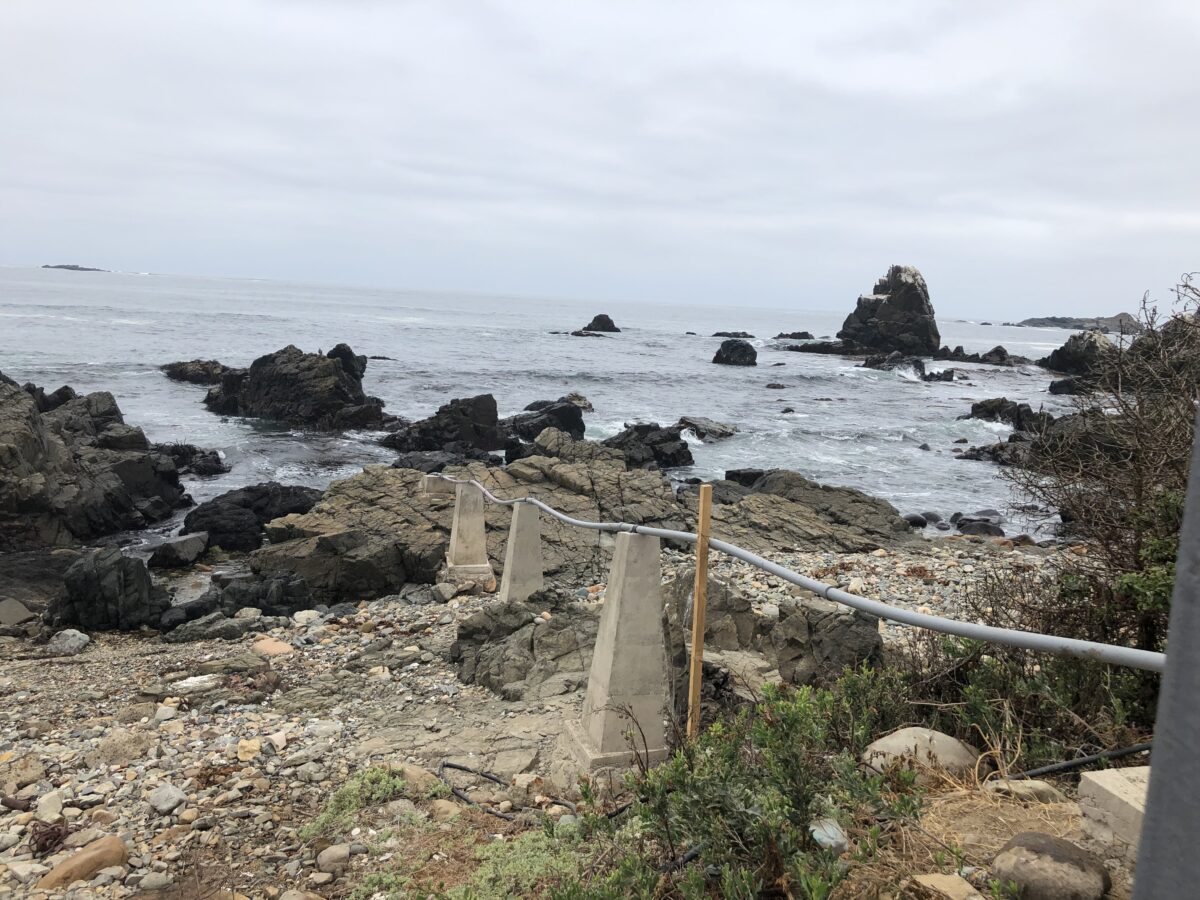 Photo of a pipe that carries seawater to the desalination plant installed in the Chigualoco cove, where an association of 30 fishermen operates. The plant’s annual operating cost is approximately 2,500 dollars. Located in the Chilean municipality of Los Vilos, the plant mainly runs on solar power and collects water through a small pipe connected to a pump. CREDIT: Orlando Milesi/IPS

Looking out to sea

The year 2021 was the driest in Chile’s history, and a recurrent water deficit is predicted for the future. As a result, the public and the country’s authorities are looking mainly to the sea to provide water in the future, as well as to the glaciers of their Andean peaks.

In his first press conference for foreign correspondents on his third day in office on Mar. 14, President Gabriel Boric referred to the water crisis and announced the aim to “move forward with desalination, while also taking charge of the externalities it generates. In particular, what to do with the brine.”

“One problem is drought and another is the poor use of water resources and water rights. We have to make progress in the modernization of the area and in better use of gray water,” he added.

In fact, only less than 30 percent of Chilean agriculture uses technified irrigation, in a country whose economy is based on export agribusiness, mining, particularly copper mining, and large-scale fishing. Meanwhile, family agriculture and artisanal fishing are the most affected by the water deficit, despite their importance in labor and social terms.

In Chile, water rights are in private hands. Now water, including sea water, is the focus of debate and would be given a new definition in the new constitution, the draft of which must be completed by Jul. 4 by the members of the constitutional convention and which will be approved or rejected by voters in a September or October referendum.

Minera Escondida, the world’s largest copper-producing mine owned by the Australian-British company BHP, located at 3,200 meters above sea level, uses water piped 180 kilometers from a desalination plant on the coast to the Antofagasta region where it is located.

In late 2019, the Escondida Water Supply Expansion (EWS) was installed, “which allowed us to stop drawing water from the well and to use 100 percent seawater, a unique milestone worldwide,” explained Hada Matrás, the mine´s production manager.

Mining companies in Chile plan to increase their eight desalination plants currently in operation to 15 by 2028. 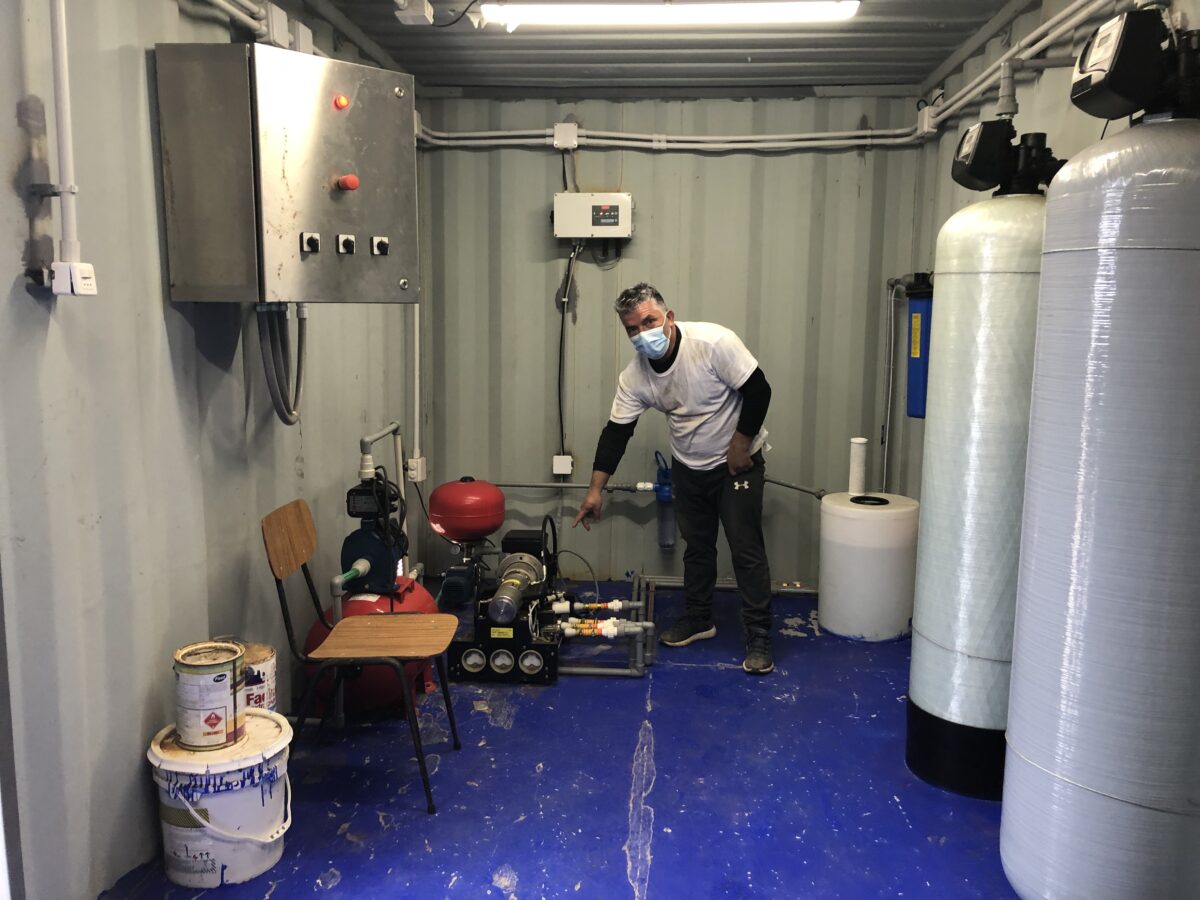 Miguel Barraza, secretary of the Chigualoco fishermen’s union, which operates the desalination plant they use in that cove in the northern Chilean municipality of Los Vilos. Now that they have water, the fishermen plan to open a restaurant and build a multipurpose building. CREDIT: Orlando Milesi/IPS

Of the three plants designed to supply water to municipalities, the Nueva Atacama plant, operating since December, stands out. Built with a public investment of 250 million dollars and later transferred to a private consortium, it produces 450 liters per second (L/s) and supplies the municipalities of Tierra Amarilla, Caldera, Copiapó and Chañaral, which are located around 800 kilometers north of Santiago.

But desalination will not be confined to the North, where water is most urgently needed. For the first time, a desalination plant, Nuevosur, has also been installed in the south of Chile, in Iloca, 288 kilometers from Santiago.

The investment totaled 2.5 million dollars and the plant seeks to “increase the availability of water and cover the rising demand that occurs mainly in the (southern hemisphere) summer,” the company told IPS.

“The project will be executed in two stages: during the first phase – which has already been developed – the system will allow us to treat 15 L/s and in the second phase we will reach a treatment level of 26 L/s,” said the Nuevosur spokesman.

Pros and cons of desalination

Several associations created the Chilean Desalination Association and defend the process as “an excellent solution to address the water challenges of our country, as it does not depend on hydrology.”

“It is a proven, reliable and affordable technology. This combination of factors has boosted the incorporation of desalination in various production processes and has favored the growth of this industry,” the Association states.

One crucial question is what will be done with the brine left over from the process. Environmentalists fear that large blocks of salt will be dumped in the ocean, affecting the ecosystem and species living in coastal areas.

Small desalination plants produce almost no brine, so the focus is on mining companies and water distributors. 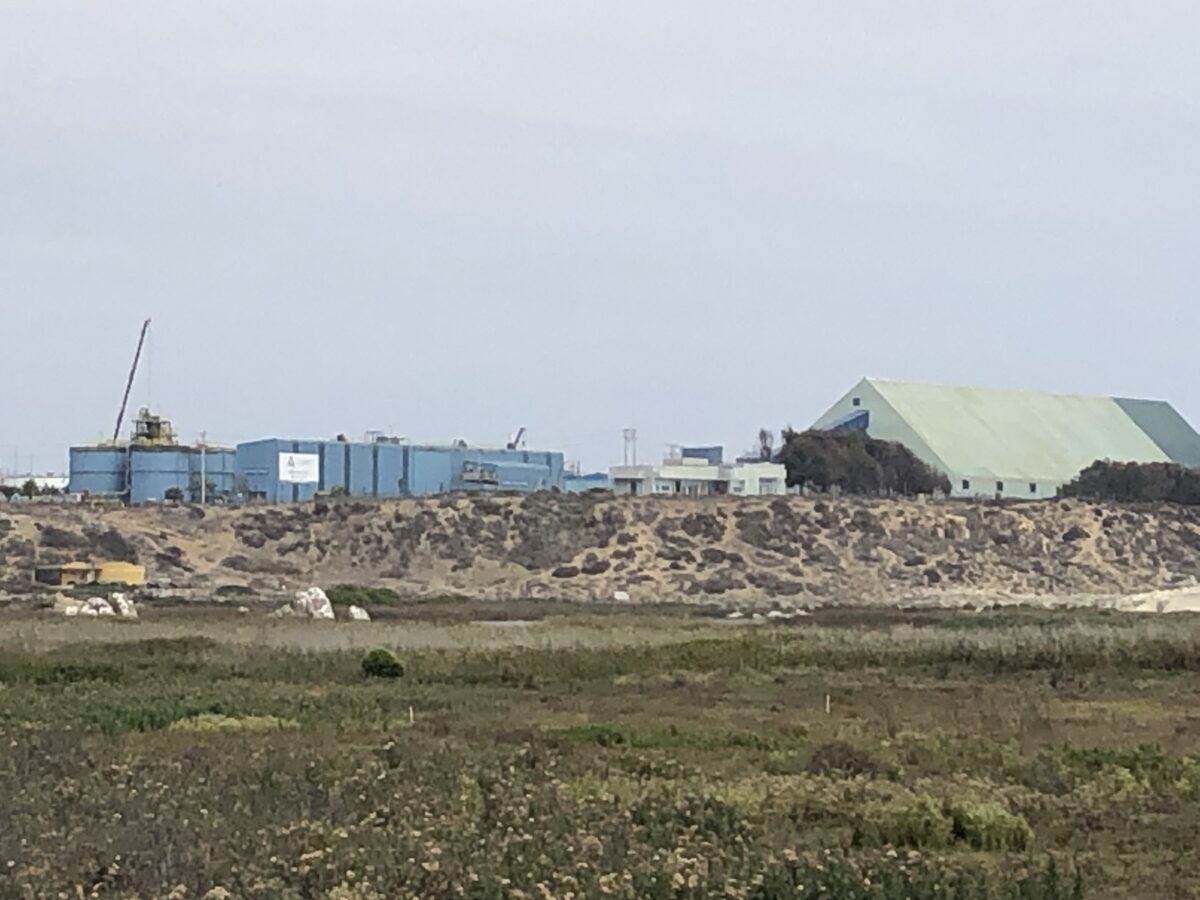 The Pelambres copper mine, with estimated reserves of 4.9 billion tons and owned by the Luksic group and a consortium of Japanese companies, has its storage and loading terminal in the northern part of the Chilean municipality of Los Vilos. From there it extracts water for desalination and use in its operations. There are already eight mines with desalination plants and by 2028 there will be 15. CREDIT: Orlando Milesi/IPS

Liesbeth Van der Meer, executive director of Oceana Chile, told IPS that “desalination is one of the solutions, but there is great concern that it is seen as the only alternative.

“They are really looking to Israel and Qatar for solutions. However, the first thing Europe always focused on was water efficiency and in Chile this has not been worked on,” said the representative of the world’s largest organization dedicated to the defense of the oceans.

Van der Meer explained that the desalination plants that damage the ecosystem “are the ones that range from 500 to more than 1000 L/s, because of the suction and all the salt they throw back into the sea.”

Desalination “has many socio-environmental costs that have not been considered. If the plant is very close to a cove, for example, the brine and substances used to prevent the accumulation of biological species in pipes produce environmental damage in the bays,” she explained.

As an example of the impacts, Van der Meer said: “We have seen places like Mejillones (a municipality in the northern region of Antofagasta), where there is a large desalination plant, and within a range of five kilometers there are no fish or any kind of life and the water is turquoise – not because it is clean but because there is no life there.”

The environmentalist demanded a national water plan to regulate the construction of desalination plants and called for the protection of the 10 miles of territorial waters “where a large part of the wealth of fishing resources is located.”

Ricardo Cabezas, an aerospace physicist and geomatician, agreed that “legislation is needed to oblige those companies that use seawater to have a monitoring system and oceanographic studies to understand the flow of currents.”

“Temperature differences are not high when desalinating because in the reverse osmosis process there is no thermal plant,” he said.

And with respect to brine, he explained to IPS that “there are experiences at the international level where many minerals are recovered from the salt.”

According to Cabezas, “20 percent of the waste can be optimally managed if you reuse part of the brine by reprocessing it to obtain rare earths, rhenium and other common minerals.

“You can add value to salt and it becomes a raw material rather than a waste material,” he stressed.

Cabezas said that: “If we manage to solve the brine problem, we will make a qualitative leap and the main beneficiary will be the Chilean population because the crucial water problem will be solved.”

The academic pointed out that the Nueva Atacama plant, for example, managed to “attenuate the effect on the sea with diffusers that do not produce a concentration of salt at the end of the pipeline’s route, but instead spurt it out over a stretch of one kilometer.”