Michelle Bachelet, UN High Commissioner for Human Rights
In an address to the 49th session of the Human Rights Council 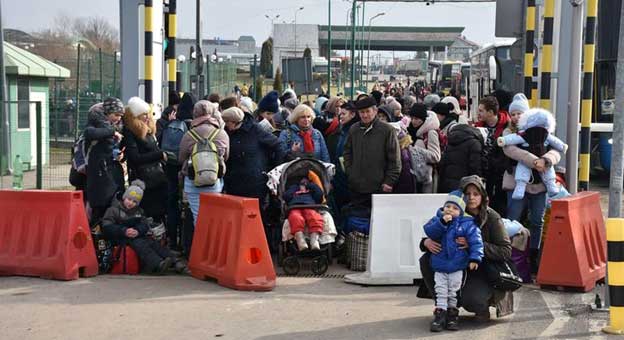 Refugees entering Poland from Ukraine at the Medyka border crossing point. March 2022. The UN has helped tens of thousands of Ukrainian refugees to cross into Poland and other neighbouring countries. Credit: UNHCR/Chris Melzer

GENEVA, Mar 31 2022 (IPS) - For more than one month now, the entire population of Ukraine has been enduring a living nightmare. The lives of millions of people are in upheaval as they are forced to flee their homes or hide in basements and bomb shelters as their cities are pummeled and destroyed.

I echo the Secretary-General’s words that “continuing the war in Ukraine is morally unacceptable, politically indefensible and militarily nonsensical.”

The hostilities must stop, without delay. Today, I call on the Russian Federation to heed the clear and strong calls of the General Assembly and of this Council, and immediately act to withdraw its troops from Ukrainian territory.

In the five weeks since the conflict began, the UN Human Rights Monitoring Mission in Ukraine has recorded at least 1,189 deaths of civilian men, women and children and at least 1,901 injuries. We know the actual figures are likely far higher. In many places of intensive hostilities, such as Mariupol and Volnovakha, it is very challenging to obtain a comprehensive picture.

The persistent use of explosive weapons with wide area effects in populated areas is of immense concern. These weapons include missiles, heavy artillery shells and rockets, and airstrikes, causing massive destruction of and damage to civilian objects.

Overall, 55 medical establishments were damaged, 10 destroyed, and two were looted. Actual numbers are again likely to be considerably higher, and reports of additional incidents are being corroborated by the Human Rights Monitoring Mission.

Indiscriminate attacks are prohibited under international humanitarian law and may amount to war crimes. The massive destruction of civilian objects and the high number of civilian casualties strongly indicate that the fundamental principles of distinction, proportionality and precaution have not been sufficiently adhered to.

Civilians are enduring immeasurable suffering, and the humanitarian crisis is critical. In many areas across the country, people urgently need medical supplies, food, water, shelter and basic household items.

Above all, they need the bombs to cease, and the weapons to fall silent.

In several besieged cities, my Office has noted a significant increase in mortality rates among civilians that can be attributed to disrupted medical care coupled with conflict-related deprivation and stress.

As one woman from Kyiv told my colleagues: “I cannot imagine the situation of people with diabetes, or those undergoing cancer treatment, for whom it is critical to regularly take medications.”

People with disabilities and older people face a particularly appalling humanitarian situation. Long-term care facilities are suffering a lack of food, heating, electricity, water and medication. Many residents who have chronic health conditions rely on others for care and are struggling to access bomb shelters or safe areas.

At least one facility for bedridden patients and other people with disabilities, mostly older people, came under fire while its residents were inside, with dozens of alleged casualties. My colleagues in Ukraine are working to establish the fate and whereabouts of survivors. Moreover, displaced people with disabilities, now staying at poorly equipped temporary facilities, often lack access to health care and rehabilitation services.

Since the beginning of the invasion, Russian armed forces have carried out attacks and military strikes on and near large cities, including Chernihiv, Kharkiv, Kherson, Mykolaiv, Sievierodonetsk, Sumy, and Mariupol, and the capital, Kyiv.

In the besieged city of Mariupol, people are living in sheer terror. The situation is worsening by the day, with constant shelling, fighting in the streets and people struggling to survive with the bare minimum of life’s necessities including food, water and medical supplies.

We are looking into allegations that some Mariupol residents have been forcibly evacuated, either to territory controlled by Russian-affiliated armed groups or to the Russian Federation.

Across Ukraine, the rights to life, liberty and security are under attack. Detention of civilians who are vocal about their pro-Ukrainian views in territories under control of Russian forces has become widespread. My Office has also received allegations of killings of two civilians considered to be affiliated with Russian armed forces or supporting pro-Russian views.

There are reports of up to 350 conflict-related detentions by Ukrainian law enforcement officers including four cases where the individuals’ relatives received no information regarding their formal arrest, place of detention or their fate.

Furthermore, I am very concerned by the abundance of videos available through open sources depicting interrogations of prisoners of war that have been taken by both Ukrainian and Russian forces.

We have also received some allegations of conflict-related sexual violence, including rape, and have been working to corroborate them.

Additionally, freedom of expression is under threat. Every day, many journalists are courageously fighting a crucial battle against mounting misinformation and propaganda, often putting their own lives at great risk.

Seven journalists and media workers have been killed since hostilities began, and another 15 have come under armed attack, nine of whom were injured. We have also documented the arbitrary detention and the possible enforced disappearance of 22 journalists and civil society activists who have been vocal against the invasion in Kyiv, Kherson, Luhansk, and Zaporizhzhia regions.

I underscore that independent, objective reporting of the facts on the ground is absolutely vital to counter the harmful spread of misinformation and propaganda.

The devastating consequences of this war are being felt far outside Ukraine’s borders. Nearly a quarter of Ukraine’s population have been forced to flee – over 4 million people have fled the country since the attack began, and an estimated 6.5 million are internally displaced.

It is encouraging to see the outpouring of support offered to refugees by Ukraine’s neighbours and other countries around the world. I reiterate that it is essential to extend such welcome to all who have fled, without discrimination.

I also urge destination countries to provide particular protection to women and children, many of whom face risks of human trafficking, including sexual and labour exploitation.

Additionally, a rise in Russophobia has been observed in a number of countries. My Office continues to monitor this closely.

As the war approaches its sixth week, I reiterate my calls for States to respect and uphold international humanitarian and human rights law. I urge humanitarian assistance to be delivered safely and effectively.

All civilians must be protected and those who wish to leave must be provided safe passage in the direction they choose. And prisoners of war must be treated with dignity and full respect for their rights.

The UN Human Rights Monitoring Mission in Ukraine will continue its vital monitoring role. Despite the very difficult security context, staff in various parts of the country continue to document civilian casualties, the impact of hostilities and violations of human rights. I take this opportunity to thank all who are working to assist the people of Ukraine.

Every day, my colleagues are listening to the heartbreaking stories of Ukrainians whose lives have been shattered by these brutal attacks. Just last week, they asked a simple question to a displaced man from a town in eastern Ukraine – “where are you from?” His reply: “I am from Izium, a city that no longer exists.”

The terror and agony of the Ukrainian people is palpable and is being felt around the world. They want the war to stop, and to return to peace, safety and human dignity.

It is long past time to heed their call.