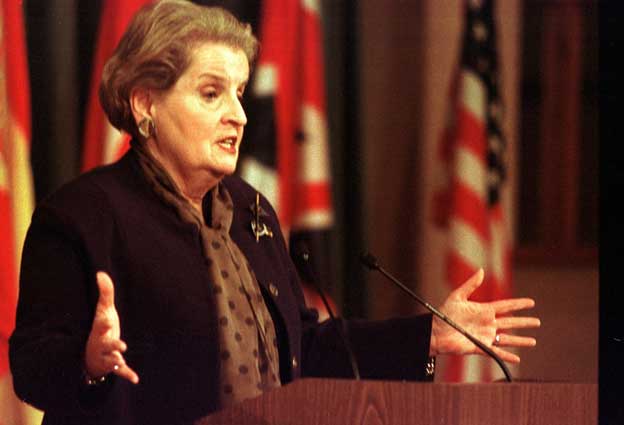 UNITED NATIONS, Apr 1 2022 (IPS) - When Madeleine Albright was nominated to be the first female US Secretary of State back in 1997, some apparently questioned whether “a woman could go toe-to-toe with world leaders”.

“Madeleine quickly quashed those misguided doubts,” says Secretary of State Antony Blinken in a tribute to Albright, who passed away last week at the age of 84. “There was simply no doubt that, in any room, she was as tough as anyone and often tougher. That said, it wasn’t always easy.”

Blinken says she reportedly walked into her first meeting of the UN Security Council, as the new U.S. ambassador, and quipped: “15 seats and 14 men, all looking at me.”

But when she saw the plaque at her seat that read THE UNITED STATES OF AMERICA, her nerves vanished: “I thought, if I do not speak today, the voice of the United States will not be heard. When I finally did speak, it was the first time that I represented the country of my naturalization, the place where I belonged.”

Albright, known for her courageous stand on international diplomacy, was also a feminist and a strong advocate of gender empowerment. When she campaigned for Hillary Clinton, who was running for the US presidency in 2016, Albright famously told a gathering of potential women voters: “There is a special place in hell for women who don’t help other women”.

But when she was the US envoy to the United Nations (1993-1997), Albright had a rousing, long running battle with UN Secretary-General (UNSG) Boutros Boutros-Ghali, a former deputy prime minister of Egypt.

The independence of the Secretary-General is a longstanding myth perpetuated mostly outside the United Nations. But as an international civil servant, he is expected to shed his political loyalties at the UN’s revolving door at the entrance to the Secretariat building, when he takes office, and more importantly, never seek or receive instructions from any governments.

But virtually every single Secretary-General—nine at last count– has played ball with the world’s major powers in violation of Article 100 of the UN charter.

Boutros-Ghali, the only Secretary-General to be denied a second term because of a negative US veto, and who passed away in February 2016, unveiled the insidious political maneuvering that goes inside the glass house by the East River.

That single negative vote was cast by Albright.

The US, which preaches the concept of majority rule to the outside world, exercised its veto even though Boutros-Ghali had 14 of the 15 votes in the Security Council, including the votes of the other four permanent members of the Council, namely the UK, France, Russia and China.

Boutros-Ghali, who held the post of UNSG from 1992-1996, continued a strong contentious relationship with Albright.

In its tribute to Albright, the New York Times wrote last week that she was largely unknown until Bill Clinton took office as president in 1993 and named her chief delegate to the United Nations.

Over a four-year period, the Times said, she became a tough advocate for the global interests of the United States. But she and Clinton “clashed repeatedly with Boutros-Ghali over peacekeeping operations in Somalia, Rwanda and the Bosnian civil war.”

In his 368-page book titled “Unvanquished: A US-UN Saga” (Random House, 1999), Boutros-Ghali provided an insider’s view of how the United Nations and its Secretary-General were manipulated by the Organization’s most powerful member: the United States.

In in late 1996, Albright, on instructions from the US State Department, was fixated on a single issue that had dominated her life for months: the “elimination” of Boutros-Ghali, according to the book.

UN Under-Secretary-General Joseph Verner Reed, an American, is quoted as saying that he had heard Albright say: “I will make Boutros think I am his friend; then I will break his legs.” After meticulously observing her, Boutros-Ghali concluded that Albright had accomplished her diplomatic mission with skill.

“She had carried out her campaign with determination, letting pass no opportunity to demolish my authority and tarnish my image, all the while showing a serene face, wearing a friendly smile, and repeating expressions of friendship and admiration,” he writes.

“I recalled what a Hindu scholar once said to me: there is no difference between diplomacy and deception,” wrote Boutros-Ghali, in his book.

During his tenure, Boutros-Ghali pointed out that although he was accused by Washington of being “too independent” of the US, he eventually did everything in his power to please the Americans. But still the US was the only country to say “no” to a second five-year term for Boutros-Ghali.

The former UN chief recalls a meeting in which he tells the then US Secretary of State Warren Christopher that many Americans had been appointed to UN jobs “at Washington’s request over the objections of other UN member states.”

“I had done so, I said, because I wanted American support to succeed in my job (as Secretary-General”), Boutros-Ghali says. But Christopher refused to respond.

Boutros-Ghali also recounted how Christopher had tried to convince him to publicly declare that he will not run for a second term as secretary-General. But he refused.

“Surely, you cannot dismiss the Secretary-General of the United Nations by a unilateral diktat of the United States. What about the rights of the other (14) Security Council members”? he asked Christopher. But Christopher “mumbled something inaudible and hung up, deeply displeased”.

One of his “heated disputes” with Albright was over the appointment of a new executive director for UNICEF back in 1995. It was a dispute “that seemed to irritate Albright more than any previous issue between us”.

“I recalled,” says Boutros-Ghali, “that President Clinton had pressed me to appoint him (Foege) when we had met in the Oval Office in May 1994.”

“I replied to her (Albright) as I had then to President Clinton: that while Dr. Foege was without doubt a distinguished person, unfortunately, I could not comply,” writes Boutros-Ghali.

He also told Clinton that he was personally and publicly committed to increasing the number of women in the top ranks of the United Nations, and UNICEF would particularly benefit from a woman’s leadership.

Since Belgium and Finland had already put forward “outstanding” women candidates – and since the United States had refused to pay its U.N. dues and was also making “disparaging” remarks about the world body – “there was no longer automatic acceptance by other nations that the director of UNICEF must inevitably be an American man or woman.”

“The U.S. should select a woman candidate,” he told Albright, “and then I will see what I can do,” since the appointment involved consultation with the 36-member UNICEF Executive Board.

“Albright rolled her eyes and made a face, repeating what had become her standard expression of frustration with me,” he wrote.

When the Clinton administration kept pressing Foege’s candidature, Boutros-Ghali says that “many countries on the UNICEF Board were angry and (told) me to tell the United States to go to hell.”

Although Elizabeth Rehn of Finland received 15 votes to Bellamy’s 12 in a straw poll, Boutros-Ghali said he appealed to the Board president to convince the members to achieve consensus on Bellamy so that the United States could continue a monopoly it held since UNICEF was created in 1947.

And so, Boutros-Ghali ensured that the post of UNICEF executive director will remain the intellectual birthright of the Americans for the last 75 years—and even to this date.

This article contains extracts from a newly-released book on the United Nations titled “No Comment – and Don‘t Quote Me on That”, described as a satire peppered with scores of political anecdotes. Authored by Thalif Deen, the book is available at Amazon. The link follows: https://www.rodericgrigson.com/no-comment-by-thalif-deen/