Jagoda Munic is Director, Friends of the Earth Europe 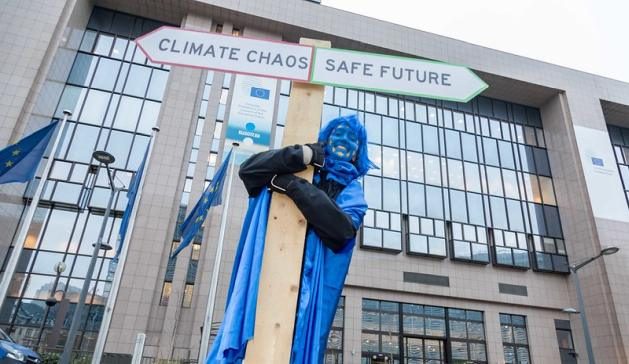 BRUSSELS, Jun 10 2022 (IPS) - This month marks the mid-point of the much-heralded European Green Deal. Taking office at the end of 2019, the European Commission went into rhetoric overdrive. This was Europe’s ‘man on the moon’ moment, we were told. The Green Deal would herald an economic paradigm shift, and “reconcile the economy with our planet…to make it work for our people” the new President, Ursula von der Leyen, said.

Now, two and a half years later, and with two and a half years of the mandate left to go, this vision of the Green Deal is barely alive. The pandemic has taken its toll – slowing down legislative processes and their implementation. Now the horrific invasion of Ukraine, and its global repercussions, are consuming politicians’ attention.

The European Green Deal can still get off the ground. Its promise can be saved, but it will require European governments to revisit the bold vision put forward over two years ago and to double-down on it

With so much hype, perhaps it was inevitable that the substance of the assorted legislation lumped under the Green Deal would be a let-down. Indeed, Friends of the Earth Europe was critical of the package from the outset. The policy proposals remain moderate and far short of what’s needed to tackle the climate and ecological emergency.

Fundamentally, the Green Deal does not recognise Europe’s historical responsibilities and it locks-in the exploitation of countries outside Europe which are already disproportionately affected with its and colossal demand for natural resources.

To be fair, in the face of unpredicted and unprecedented crises, Brussels did not drop its sustainability drive altogether – the EU has shown some resolve in keeping the green transition on its to-do list.

At this halfway point, we can say that some positive proposals have kept the potential of the Green Deal alive. A new 10-year-plan to tackle nature loss is welcome. The intention to boost renewables is also good, including the pledge to set up at least one renewable energy community in every municipality, in recognition of the need to democratise energy.

Other proposals are promising in principle but lack the necessary funding. A ‘just transition fund’ to help alleviate the social and economic costs of transition should be increased ten-fold. The ‘social climate fund’ designed to support subsidised renovations, renewables and green transport across Europe has been slashed before it even exists.

Overall, the components making up the Green Deal lack scale, urgency and justice. They are based on flawed ‘green growth’ thinking. They certainly do not constitute the step-change that was promised – and that is desperately needed to bring our socio-economic system within planetary boundaries.

Major barriers to truly progressive, transformational EU decision-making have not been tackled. The von der Leyen Commission has spectacularly failed to reign in vested interests’ influence on the agenda. In the last two and a half years this Commission has taken part in 500 meetings with representatives of oil, gas and coal companies. That’s close to one meeting every working day. The European Green Deal proposals have the fingerprints of corporate lobbying all over.

The plans are polluted by techno-fixes and failed market-based solutions. Policy-makers have fallen for the ‘hydrogen hype’ of the gas industry which promotes an overinflated role for green hydrogen in Europe’s energy mix. They are continuing to subsidise supposed ‘hydrogen ready’ infrastructure projects which in reality just lock-in continued fossil fuel use and eye-watering industry profits.

War in Ukraine has shown the fragility of the European energy system and its overreliance on fossil fuels. It must be a turning-point to get us off fossil fuels and accelerate the efficient, clean, democratic energy system of the future. In the next years we need to see massive investment in community renewables and renovations.

Green Deal proposals aimed at reducing the use of pesticides have been postponed after coming under pressure from the agribusiness lobby. This delay comes after the historic failure to reform the Common Agricultural Policy, meaning that 400 billion Euro of EU funds will continue to be spent on warped farming subsidies which mainly benefit a few environmentally-disastrous industrial-scale factory farms.

The agribusiness lobby is now cynically using the invasion of Ukraine to try to derail other sustainable agriculture goals. Their short-term arguments ignore that the decline of insects and pollinators will impact our capacity to produce food in the long-term.

The European Green Deal can still get off the ground. Its promise can be saved, but it will require European governments to revisit the bold vision put forward over two years ago and to double-down on it. The crises of the intervening years – global pandemic, military aggression, the rising cost of living – must be taken as reasons to re-commit to that vision, and press ahead with the policies to realise it, not to water it down.

The European Green Deal can still catalyse a socio-economic system that provides for the needs of all people, but only when every decision from this moment narrows inequality, and respects the Earth’s limits.