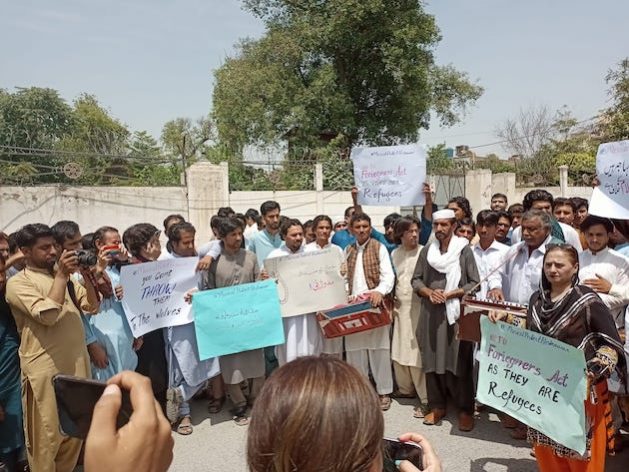 Local singers and instrumentalists joined rights activists and politicians in a protest against Afghan musicians' arrest in Peshawar. They fear that there could be serious repercussions if the musicians are deported back to Taliban-led Afghanistan. Credit: Ashfaq Yusufzai/IPS

PESHAWAR, Jun 1 2022 (IPS) - The arrest of Afghan musicians in Khyber Pakhtunkhwa province of Pakistan has elicited protests from local politicians, artists and rights activists who demand their release and say they should be allowed to stay as refugees.

“Four musicians arrested by police in Peshawar, the capital of the Khyber Pakhtunkhwa, for lack of visa and travel documents have been sent to jail and will be deported under the 14 Foreigners’ Act,” a police officer, Nasrullah Shah, told IPS.

Khyber Pakhtunkhwa (KP) is one of the four provinces of Pakistan located on the border with Afghanistan.

Police arrested the artists on May 27. They had been performing on TV and radio for years in Afghanistan, but the Taliban government’s opposition to music silenced them. The group includes Saidullah Wafa, Naveed Hassan, Ajmal and Nadeem Shah.

According to Shah, they crossed into Pakistan illegally.

The musicians, however, insisted that there was a ban on music back home, and as a result, they faced economic problems.

“Since the Taliban took power in Afghanistan in August last year, there was an unannounced ban on musical activities, which has landed the singers and musicians in hot water,” Saidullah Wafa, one of the arrested singers, told IPS. Taliban are notorious for killing musicians, and they will murder us if we go back,” Wafa said. Before fleeing to Pakistan, he lived in the Afghan capital, Kabul.

He claimed that Taliban militants consider music against Islam and have killed many singers and others associated with it in the past. Fearing prosecution, we came to Pakistan to seek refuge, the 25-year-old said.

The Human Rights Commission of Pakistan has condemned the arrest and possible deportation.

“HRCP is concerned to learn that four Afghan nationals have been arrested by the KP police under the Foreigners’ Act 1946; the court has ordered they be deported. All four face significant threats from the Taliban government in Kabul,” it tweeted.

Local music journalist Sher Alam Shinwari, who writes for Dawn newspaper, said the seized Afghan musicians are refugees. He said they cannot and should not be deported to the Taliban-led government in Afghanistan.

“Afghan musicians, since they arrived in Peshawar and elsewhere in KP, have never been involved in any unlawful activities. Secondly, they have re-joined their relatives already living in refugee camps or rented homes in and around Peshawar,” Shinwari said.

Most have valid documents or ration cards, while some of them carried artists’ registration cards issued by local artists’ organisations, he said.

Deporting Afghan musicians to the Taliban is tantamount to throwing them to the wolves because the Taliban had murdered several artists in the recent past, Shinwari explained.

Families of most of the musicians were already living in Pakistan, and their deportation would be a human rights violation.

Rashid Ahmed Khan, head of Honary Tolana, an organisation striving for musicians’ rights, told IPS that the arrested musicians would be in danger if sent back.

“They were taken into custody by police without a search warrant, sent to jail and be handed over to the Taliban – which is an inhuman act. These famous artistes moved to Peshawar last year when Taliban seized power in Afghanistan to save their lives,” he said.

On May 30, local artists held a protest demonstration against the arrest of Afghan musicians in Peshawar and urged the government to allow them to stay in Pakistan as refugees.

Sardar Hussain Babak, a local lawmaker, assured them that they would raise the issues on the floor of the parliament.

Some Afghan artists present at the protest said they had come to Pakistan for their safety and could not continue their profession in their own country.

They demanded police stop their action against the artists because they were guests in Pakistan and their lives were at risk in Afghanistan.

Local artists, including Saeeda Bibi and others, condemned the police action against the Afghan musicians and demanded their early release.

“Taliban have resorted to violence against the musicians, destroyed their equipment at different places, and shot dead people even participating in the wedding ceremonies in Nangrahar and other provinces of Afghanistan,” Saeeda Bibi told IPS.

“We have applied for bail of the detained artists with the hope to get them released at the earliest,” she said. “We have set a three-day deadline for police to stop action against the artists. Otherwise, Afghan and Pakistani artists would march on Islamabad and stage a sit-in until their demands were heard.

“We also appealed to UNHCR to take notice of the ordeal of Afghan artists so that they could live in Pakistan as refugees.”

KP Information Minister Muhammad Ali Saif told IPS that the artists should be prosecuted in terms of the law.

“We have been hosting 3 million Afghan refugees for the past four decades, which is the glaring example of hospitality. They will be treated as per the law,” he said.

There were no instructions to police regarding the arrest of Afghan musicians, and the court would decide about their deportation, he said.