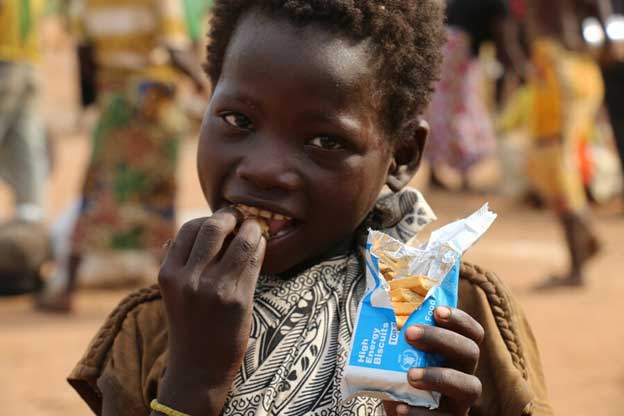 BERLIN / TERNI, Italy, Jul 25 2022 (IPS) - A growing mountain of data and analysis points to an unprecedented global crisis in the making, due to the convergence of “Four Cs” (Conflict, Covid, Climate and Costs).

As most recently highlighted at the recent UN High-Level Political Forum on the Sustainable Development Goals (HLPF), the intersection of poverty, climate vulnerability and geopolitical dynamics could unleash the worst humanitarian crisis in recent memory.

Why is this crisis different?

All food crises are intrinsically linked to spikes in fossil fuel prices. Recent episodes (such as the food price crises of 2007-2009 and 2012) display several common characteristics: increased demand for biofuels as an alternative energy source; and the diversion of massive amounts of food grains to intensive, and unsustainable livestock sectors in countries with an already high and unhealthy consumption of animal protein.

However, until now, severe impacts on food availability have been avoided thanks to favourable weather conditions that have helped to quickly restore market equilibria.
Not this time.

While the root of the current crisis is strongly linked to incessant pressure on food systems to deliver energy and meat, high fertilizer prices mean that production costs are outpacing farmgate prices of food, discouraging farmers from maintaining or increasing production.

This adds yet another layer of complexity to the “perfect storm” that has already been gathering. Covid-19 looms large over the ability of supply chains to deliver food. Conflict (Russia’s invasion of Ukraine) has siphoned-off enormous amounts of food destined for international markets as well as driving up the price of crude oil, which is highly influential in determining prices of fertilizer – the critical input in global agri-food value chains.

(Note: On July 22, The United Nations, Turkey, Russia, and Ukraine signed an agreement in Istanbul aimed at delivering Ukrainian grain to world markets. The deal was the result of months of negotiations as world food prices skyrocketed amid increasing grain shortages connected to Russia’s invasion of Ukraine. U.N. Secretary-General Antonio Guterres heralded the agreement as a major diplomatic breakthrough. “Today there is a beacon on the Black Sea. A beacon of hope—a beacon of possibility, a beacon of relief—in a world that needs it more than ever.”)

Due to our energy-hungry and inefficient food systems, over seven units of fossil fuel energy are required to produce one unit of food – from farm to retail.

Adding to the complexity of these developments is the accelerated impact of the climate crisis on global agriculture. The upshot is that the world is facing record food costs in 2022.

These “Four Cs” are instigating a scenario that could be more severe than anything we’ve seen in the past five decades, mirroring the hunger crisis of the 1970s in which millions perished from hunger.

Moreover, overall prospects for a global bumper grain crop are increasingly dim. Recent satellite surveillance shows that excessive dryness and heat stress could lead to a five million tonne shortfall in the EU wheat harvest and a combined eight million tonne contraction of wheat output in the US and India.

This adds to uncertainty about continued blockage of wheat supplies from Ukraine, which had a pre-conflict capacity of storing 60 million tonnes of grains and oilseeds.

One hopeful sign is that Ukraine has begun shipping small but increasing quantities of food via land routes, with significant volumes also passing through the Danube River. Several international initiatives are also underway to unblock supply chains and compensate for storage infrastructure destroyed by Russia.

These include US support for new silos along the border with Romania and Poland, and Turkey’s offer to help reinstate Ukraine’s exports from the Black Sea. However, any delays to these initiatives could force many Ukrainian farmers into bankruptcy, jeopardizing global food security for years to come.

Can we crisis-proof our food systems?

The war in Ukraine has thrown into sharp focus – yet again – to just how vulnerable our energy and food systems are to shocks, including geopolitical tensions. Dependence on a few countries for energy and fertilizer needs, poses exceptional and unacceptable risks.

Faced with severe food shortages, many countries will undoubtedly turn to Russia, which is set for an excellent food harvest this season, raising prospects of “weaponizing grain” in retaliation against sanctions.

Behind the geopolitics of blockades on Ukrainian grain is an untold story of a fragile, overly-centralized global food system, constructed and promoted by the richer nations and their corporations, that was already vulnerable to shocks long before the tanks rolled in.

Added to these continuing uncertainties, is the increasing impact of climate extremes to global food production. Once largely associated with the African region, drought is wreaking havoc to food systems around the world. A record-breaking drought reordered plantings in the United States, heat stress in India has led to a reported 10-35 percent decline in crop yields with more heatwaves predicted prompting a ban on the country’s wheat exports, with restrictions on food shipments instigated by another 34 countries.

Devastating heatwaves and the worst drought in 70 years are also being felt in northern regions of Italy driving up prices by as much as 50% , while the Horn of Africa is being ravaged by the worst drought in four decades. With only one percent of arable land equipped for irrigation in the region, the longer-term prognosis for strengthening climate resilience is disturbing, to say the least.

Unfortunately, the global response so far has largely taken the same laissez faire approach that was proposed in the wake of previous crises. In Einstein’s words, it is tantamount to “doing the same thing(s) over and over again and expecting different results.”

To achieve the fundamental reform needed, our food systems need to be set on a transformative pathway, necessitating the redesign around intertwined action.

It would be wishful thinking to expect that the world will ever be free of multiple crises. The question, therefore, is how to construct a more resilient global food system to shocks from wherever they might arise.

In the short-term, emergency measures are needed to safeguard access to food for those who are hardest hit from high food prices. Moratoriums on the biofuel and livestock feed sectors would free up sufficient quantities of grain to avoid a hunger crisis. Food stocks, where abundant, should also be released to ensure that the most at risk have affordable and open access to food.

A communiqué issued at the close of the recent G7 Summit in Germany unveiled plans to boost fertilizer production and promote the supply of organic fertilizers. G7 leaders also encouraged the release of food from stockpiles and agreed not to introduce any new public subsidies for fossil fuel sectors, even as they called for additional temporary investment in the natural gas industry to mitigate current supply shortages.

In parallel to these emergency measures, we urgently need to embark a more resilient pathway in the medium- to long-term. Even were the war in Ukraine to end tomorrow and supply chains to return to “normal” we must shift the current paradigm of dependency on climate-destroying mineral fertilizers. We must make hard choices to wean ourselves off conventional monocultural agriculture towards more diverse, localized and ecosystem-sensitive food systems.

Science tells us that nitrogen-based fertilizers derived from fossil fuels, can contribute to 40 percent of cereal yields. Continuing to depend on fertilizer supplies from a few countries is therefore tantamount to holding nearly 8 billion people to ransom.

It is increasingly clear that to avert the impact of such geopolitics, policy makers must make serious attempts to delink world food security from fossil fuel-based and climate-destroying inputs. Incentivizing inexpensive and readily available and proven technologies – such as agroforestry and other agroecological practices – boosts soil health, improves the availability of nutritious food, and strengthens climate resilience.

Repurposing a mere fraction of current perverse subsidises for the fossil fuel sector, which amount to an astounding US$ 7 trillion per year, is a critical step towards enabling such a transformation.

Ultimately, however, we need to value our food systems differently by including their total footprint on human health and the environment. Ignoring the “true cost” of food production has led to a focus on cheap and non-nutritious food that is linked to the global obesity pandemic and a greater risk of zoonotic disease spillovers.

The benefits of such a True Cost Accounting (TCA) approach would be manifold: a reduction in food waste, a far more productive and sustainable agricultural sector that respects our natural capital, and a sense of realism in achieving greenhouse gas targets under the Paris Agreement.

Decoupling the world’s food systems from fossil fuel-based inputs would be a major step forward in solving long-term global hunger. A necessary first step towards such transformation is to design pathways in which the global north shares its food stockpiles instead of diverting grains to fuel cars and promoting unsustainable livestock production.

Such repurposing requires immediate investment in renewable energy and the manufacture of bio-fertilizers. Organic fertilizers are integral to the circular economy, which is an increasingly important model for planetary sustainability.

Equally, the overuse of mineral fertilizers needs to be addressed, especially given their role in creating additional input demand, which in turn leads to higher prices, while compounding environmental degradation.

While the G7 Leaders’ communiqué is a refreshing breakaway from tradition, the world still has much to learn from history. The world was ill-prepared in the 1970s, the 2000s as well as today. Arguably, solutions to fix increasingly complex and intertwined food systems are difficult.

Vested interests, a lack of governance and a system of economic accounting that undervalues our natural and societal capital are challenges under which transformation of our food systems needs to happen. This task is by no means underestimated, but bold action is needed to ensure food systems become more crisis-proof.

As an emergency step, prioritizing food for people “over all else” would build up trust especially between developing regions in need and the G7. And trust is also a very scarce resource in the world of today.

Töpfer Müller Gaßner, a Think Tank for Sustainability, based in Berlin.

About TMG
TMG Research gGmbH is a Berlin-based research organization with an African regional hub in Nairobi and projects across several countries in Africa. Together with partners at the local, national and international levels, TMG explores transformative solutions for entrenched sustainability challenges, with a focus on four thematic clusters: Food Systems, Land Governance, Nature-Based Solutions and Urban Futures.