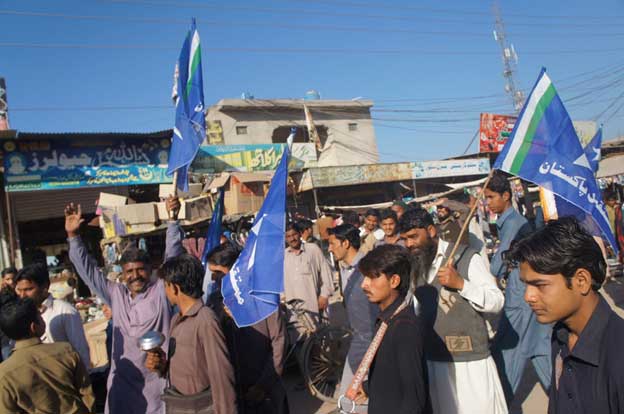 Supporters of a Pakistani political party gather to welcome the party leader for a corner meeting at a village in the Punjab province.

KARACHI, Pakistan, Jul 27 2022 (IPS) - In recent days, as Pakistan’s economic woes have intensified, a veritable cottage industry has developed to suggest ways of putting the country back on track.

The latest entrant in this field is the eminent Harvard Economics professor Asim Khwaja. In a long and widely circulated tweet he outlines his analysis of the problem. He argues that the way out is to work to increase productivity. He is not wrong. Indeed, increased productivity is a useful and necessary objective.

The problem however, is that Dr.Khawja and all the other illustrious academics who have contributed to the debate of what has to be done, are missing the point. There is really no dispute about what has to be done. It has been clear for some time.

I outlined the main elements some three years ago in a piece for Daily Times: “Slash imports, boost exports, invest in vital infrastructure, rejuvenate local industry by sharply raising tariff barriers, work on aligning the education system with the job market, the list goes on and on.” This prescription is just as valid, possibly more so, today than it was three years ago.

The point that the academics are missing is not “what has to be done” rather it is “who will do it”. In normal countries, the responsibility would fall on the elected representative of those countries. But in our case, the people who sit in our assemblies simply do not have the ability or desire to do what is necessary.

Sadly, our problem is that whenever there are elections, we succeed brilliantly in putting the worst of our people in parliament. This is the exact opposite of what successful democracies do, or at least endeavour to do, which is to send the best of their people to parliament. And this is why they are successful.

So, why do we in Pakistan get this so wrong? Genuine democracy is conditioned on two important precepts. One, that voters understand the issues. And two, that they are free to vote for the candidates of their choosing. Neither condition obtains in Pakistan.

Feudal control of the levers of power has ensured widespread illiteracy. And vast swathes of the population are obliged to vote the way they are told to vote by their feudal lords. So, voters do not understand the issues and they cannot vote the way they want to.

What we have is not democracy. It is feudalism camouflaged as democracy. This is why the same people or their ilk – the feudal lords and their families – always get elected. And by and large they tend to be corrupt and incompetent. They get elected to parliament to plunder the state not to build it.

And until such time as we replace these “representatives” arguably the worst of our people, with the best nothing, in terms of our economic reality will change. We will continue to decline rather than progress.

So, the challenge for all the well-meaning people, academics and others, is to shift their focus from what needs to be done to the central issue of how do we get genuine democracy in the country.

In previous articles I have suggested a possible solution: Limit the vote to those who have had at least 10 years of schooling. People who are educated have minds of their own. They understand the issues. And they are usually, in my experience, not slave to the feudals.

This is a simple change. It will lead to genuine democracy. And, if enacted, it will change our destiny by truly empowering people and opening the doors of parliament to those who have the competence, energy, desire and will to build the country.

Nadeem Qureshi is founding chairman of the political party Mustaqbil Pakistan and has had a long career in business, mainly in the Middle East. He studied engineering at MIT, and business at Harvard Business School, is fluent in classical Arabic and has published a translation from Arabic to English of a book entitled: Why Muslims Lagged Behind and Others Progressed.