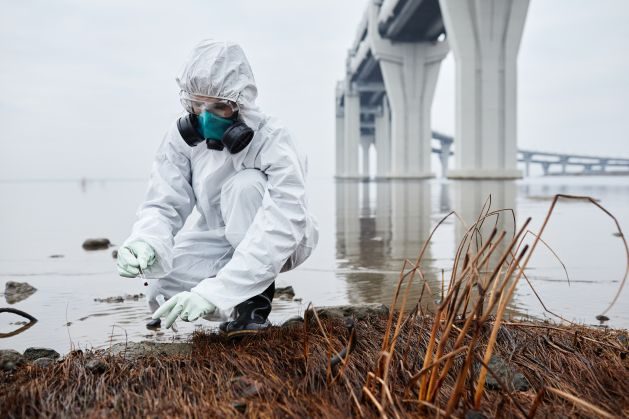 In the United States, race is the number one indicator of whether or not you live near potential toxic exposures. Credit: Courtesy of the author.

BIRMINGHAM, USA, Aug 25 2022 (IPS) - Built in 1942 and still operating today, Camp Lejeune is a military base covering over 153,000 acres in Jacksonville, North Carolina. Shortly after it was founded, it became heavily contaminated with toxic chemicals like perchloroethylene, benzene, trichloroethylene, vinyl chloride, and later on PFAS. However, the military only realized the severity of the issue in 1982, when the Marine Corps discovered volatile organic compounds on base.

PFAS, a group of dangerous chemicals that may take over a thousand years to break down in the environment, is found in firefighting foam (AFFF). As a result of firefighters using and training with AFFF on base, PFAS ended up polluting at least 14 sites of the military base. AFFF, a fire suppressant, contains between 50% and 98% PFAS and was used regularly at Camp Lejeune.

More than one million people lived at Camp Lejeune between 1953 and 1987 when toxic exposure on the military base was most extreme. During this time over 20,000 men trained on a racially segregated Marine base known as Montford Point, which is now part of Camp Lejeune, in preparation for World War II.

The living conditions at Montford Point were inferior compared to Camp Lejeune. The Marines stationed at Montford endured racism and were not permitted to enter Camp Lejeune without being accompanied by a white servicemember.

The military used Montford Point until approximately seven years before the federal government prohibited racial segregation. Although this military base was not part of Camp Lejeune at the time, it was also heavily contaminated with some of the same toxic agents.

Regarding active duty military members, it is important to note that black individuals currently represent only 19% of all enlisted personnel. Only 9% of those are officers. Several decades ago, there were even fewer black service members, and a very small number had a high rank.

According to data from the Pentagon and the Veterans Affairs Department, black service members are less likely to become officers. As a result, they are more prone to being injured while serving their country than their white counterparts.

Some black military members became injured by being exposed to toxic chemicals daily on military bases such as Camp Lejeune. Since most have a lower rank, they must spend time on contaminated military installations, unlike most officers, lieutenants, and generals. Therefore, the risk of toxic exposure among black servicemembers as a whole, is considerably higher.

In the United States, race is the number one indicator of whether or not you live near potential toxic exposures. There is a consistent pattern in this country of placing hazardous waste and hazardous industry in disenfranchised areas, often predominantly neighborhoods of color.

Right now, the population of Jacksonville, North Carolina, is 74,313. An additional 170,000 people live at Camp Lejeune. Half of the city’s population inhabits the military base, which places the civilian community at high risk of toxic exposure. Consequently, 37,156 individuals may come to struggle with awful, life-threatening diseases in the near future. This is not uncommon, as there are civilian communities living on or near the 679 contaminated military bases in the United States.

Alarmingly, the military ordered the clandestine burning of over 20 million pounds of AFFF and AFFF waste between 2016 and 2020, despite no evidence that incineration can destroy PFAS. The largest amounts of AFFF remains were burnt in New York, near Plattsburgh Air Force Base, Niagara Falls Air Reserve Station, and Griffiss Air Force Base. By burning this fire suppressant and the waste it left behind on military bases such as Camp Lejeune, the communities that live nearby, will inevitably be affected by the toxins emitted into the air by this reckless process.

How can we combat environmental racism?

To combat environmental racism, we must attempt to curb environmental crime and seek justice for its harm. Approximately 1/3 of the total burden of disease worldwide can be attributed to environmental hazards. Black Americans breathe in 56% more polluted air than they produce, while Latinos inhale 63% more. In comparison, white people breathe in 17% less toxic air than they release.

When industry creates an environmental hazard that harms communities, legislative efforts and criminal conviction can sometimes be an effective deterrent. However, efforts to restrict environmental crime in this way have often been met with opposition from professional organizations who see policy as a hindrance to economic interest.

If the state turns a blind eye private law can aid disenfranchised, harmed communities through toxic tort and class action lawsuits. Grassroots efforts and coalitions with legal groups and private firms can be a successful option for redress.

Chandler Blythe Duncan is a lawyer and MPH at Environmental Litigation Group P.C., whose main practice area is toxic tort law. Chandler’s expertise is providing quality legal assistance in cases involving water contamination and toxic exposure. She is also a member of the American Bar Association, the Birmingham Bar Association, and the Birmingham Volunteer Lawyers Program.