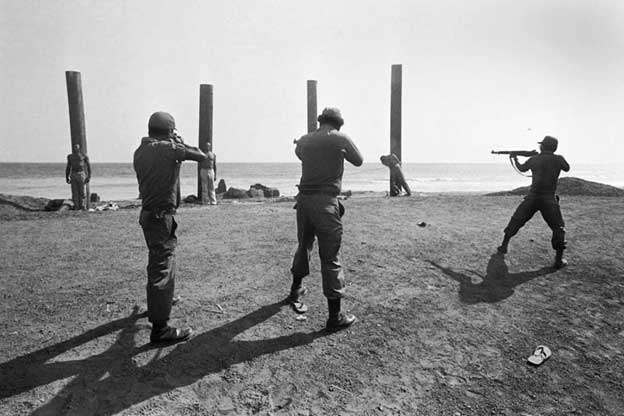 UNITED NATIONS, Aug 12 2022 (IPS) - When world political leaders, mostly presidents and prime ministers, are ousted from power following military coups or street demonstrations, they flee to “safe havens” to avoid being jailed, executed by firing squads or hanged in public.

Perhaps one of the secure “safe havens”—and a popular “political retirement home”– is Saudi Arabia, a traditionally authoritarian regime, which has provided sanctuary for leaders from Uganda, Tunisia, Pakistan, Yemen and Qatar.

A cartoon in a British newspaper summed it up when it jokingly depicted the “ARRIVALS” terminal in a Saudi airport with a fast-checkout line for visitors– supermarket-style—with a sign that read: “FOR OUSTED WORLD LEADERS ONLY”

Stephen Zunes, professor of politics and coordinator of Middle Eastern Studies at the University of San Francisco, told IPS “It is not surprising that one of the most authoritarian countries in the world would provide a refuge for other authoritarian leaders.”

And, given that the Saudis have such strong backing from the United States, they have even less to worry about— in terms of pressure for extradition (of asylum seekers), he declared.

In recent memory, some of the political leaders who sought asylum in Saudi Arabia include Idi Amin of Uganda (2003), Zine El Abdine Ben Ali of Tunisia (2019), Abd Rabbuh Mansur Hadi of Yemen (2015), Nawaz Sharif of Pakistan (2007) and Khalifa bin Hamad Al-Thani, the Emir of Qatar (2004).

Sri Lankan President Gotabaya Rajapaksa, who was ousted from power by an angry mob last month, and whose government—and extended family—were accused of large-scale corruption and maladministration, is probably a potential candidate for Saudi asylum, after his stops in the Maldives, Singapore and Thailand. As he travels round Asia, Rajapaksa has been contemptuously dubbed as a former president in search of a country.

But still there were ousted leaders from Iran, Afghanistan and Liberia who were either jailed, hanged or executed.

Singling out the political exiles in Saudi Arabia, the Middle East Eye, a London-based online news outlet, quoted Andrew Hammond, historian at Oxford University and author of a book on Saudi Arabia, as saying: “On the one hand, that means there can be no political parties, protests, petitions and other modern phenomena related to representative electoral politics.

“But on the other, it means the country can be open and welcoming to people of many stripes and origins, as long as they steer clear of politics or act within lines approved by the government.”

As William Dobson, a politics and foreign affairs editor for Slate, points out in his book “The Dictator’s Learning Curve”: “What dictators and authoritarians fear most is their own people”

In the 1960s, Iranian Prime Minister Mohammad Mossadegh, who was ousted from office following a coup engineered by the Central Intelligence Agency (CIA) and British intelligence, was sentenced to death and confined to a military prison for three years

According to the Brits and the Americans, he made the supreme mistake of nationalizing huge British oil holdings in Iran. Mossadegh died in March 1967 when he was under house arrest, and he was succeeded by one of America’s staunchest allies: the Shah of Iran.

When the Taliban captured power back in 1996, one of its first political acts was to hang the Afghan President Mohammed Najibullah in Ariana Square in Kabul.

On August 15 last year, the Taliban, assumed power once again, this time ousting the US-backed government of Ashraf Ghani, a former World Bank official, armed with a doctorate in anthropology from one of the most prestigious Ivy League educational institutions in the US: Columbia University.

In another high-profile case, the government of President Ferdinand Marcos Sr of the Philippines, was toppled by a popular uprising in 1986. Described as a lawyer, dictator, kleptocrat and a strong American ally, Marcos died in exile in Honolulu, Hawaii, in September 1989, after seeking asylum in the US.

But Liberian political leaders, however, were not that lucky.

On April 12, 1980, Samuel Doe led a military coup, killing President William R. Tolbert, Jr., in the Executive Mansion in Liberia, a West African country founded by then-emancipated African-American slaves, with its capital named after the fifth US President James Monroe.

The entire Cabinet, was publicly paraded in the nude, lined up on a beach in the capital of Monrovia – and shot to death.

According to an April 1980 BBC report, “13 leading officials of the ousted government in Liberia were publicly executed on the orders of the new military regime.”

The dead men included several former cabinet ministers and the elder brother of William Tolbert, the assassinated president of the west African state. They were tied to stakes on a beach next to the army barracks in the capital, Monrovia, and shot, said BBC.

“Journalists who had been taken to the barracks to watch the executions said they were cruel and messy.”