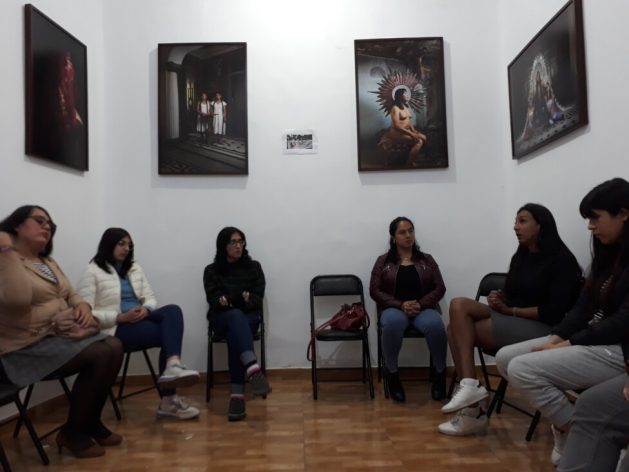 In its premises located in a middle-class district of Lima, the organization Féminas Perú holds meetings of trans women every Tuesday night. They began meeting in 2015 and today they are taking on the challenge of strengthening their leadership and empowering their community. CREDIT: Mariela Jara/IPS

LIMA, Sep 12 2022 (IPS) - “Without recognition of your identity by the State and society, there is no exercise of citizenship or rights,” said Leyla Huerta, director of Féminas Perú, an organization that has been working since 2015 to empower transgender women in the face of the highly vulnerable situation they find themselves in.

She is 44 years old and as a trans woman has experienced multiple situations of discrimination because of her gender identity.

“We have all had the experience of being told ‘I don’t want to discriminate against you, I’m just reading what your identity document says.’ That legalizes discrimination,” she said in her dialogue with IPS during one of the days of meetings and activities held every week at Féminas Perú’s headquarters in Pueblo Libre, a middle-class residential district in the capital.

"I am a visible trans person and I have been prey to moments of vulnerability not only of my rights but of my identity, in many ways and places. It is complicated for us to go to the bank, to use health services, to ride a bus, to just walk down the street. You feel people watching you, my body is a disturbance.” -- Gretel Warmicha

Huerta said “we saw this clearly in the case of Rodrigo and Sebastián, in which the denial of rights crossed borders and exposed them to extortion, torture and death.”

She was referring to the case of two young Peruvian transsexuals, Rodrigo Ventosilla and Sebastián Marallano, who had just been married in Chile – where same-sex marriage is legal – and were detained upon arrival at the Bali airport on their honeymoon and subjected to cruel treatment between Aug. 6 and 10, according to their families.

The abuse caused the death of Rodrigo, while according to the families and their lawyers the Peruvian government and its diplomats in Indonesia failed them. They have denounced the Peruvian and Indonesian authorities for the crime of torture resulting in death.

The case is considered a hate crime by human rights activists and has helped bring to the forefront the discrimination faced on so many fronts by transgender people from this country.

Féminas emerged with the idea of creating a space for the community empowerment of trans women. Huerta promoted it while coordinating a project to approve a health care model for trans women.

“Instead of continuing to be a target population of NGO projects, we wanted to be the ones to lead them ourselves and with the resources we also wanted to build capacity in our community,” she explained at the Féminas office.

They have met at the organization’s office every Tuesday for the past seven years, offering a safe, welcoming meeting space for learning about their rights, while at the same time taking on the challenge of leading and running their organization.

“It is hard for Féminas to find leaders, people who want to join, because trans people have such pressing day-to-day needs, and the exclusion they face is much stronger,” she said. 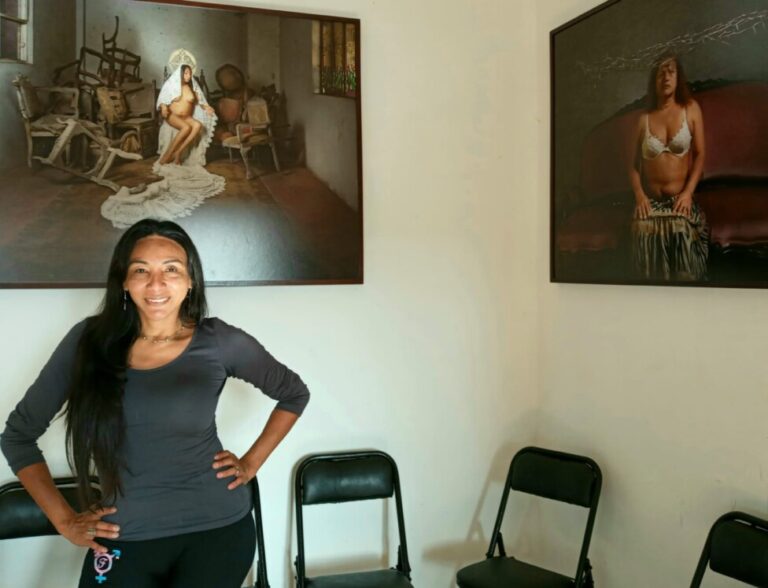 Leyla Huerta, a 44-year-old Peruvian activist and trans woman, has achieved through a judicial process the recognition of her right to her lived identity. She has initiated new legal proceedings for the recognition of her gender. The identity documents of trans persons still carry the names assigned to them at birth and the Peruvian government has thrown up barriers to changing them. CREDIT: Mariela Jara/IPS

Barriers in the State

The Peruvian constitution recognizes the right to equality and non-discrimination, but it is a dead letter for trans people, who face barriers from the State when trying to modify the identity assigned to them at birth.

In 2019, the National Commission Against Discrimination of the Ministry of Justice and Human Rights issued a report recommending that civil registry offices rectify their procedures for non-discriminatory access to the National Identity Card (DNI).

It stated that in the case of trans persons, the fact that the information on their DNI does not coincide with their lived identity causes them to receive humiliating treatment, increasing their vulnerability.

The report indicated that by 2019 there were 140 judicial proceedings seeking identity change, of which only nine had been completed and four had obtained rulings.

Only six percent of 400 trans women interviewed had managed to change their identity document, according to a survey conducted in Lima and neighboring Callao, the country’s main port city, carried out in 2020 on behalf of various organizations, including Féminas Perú, and published by the non-governmental Promsex.

A group of trans women involved in the performing arts with whom IPS spoke in the room of a mutual friend of theirs identify as women but still have the male names assigned to them at birth on their ID cards, because they can’t afford the legal proceedings to try to get them changed.

They said they would need at least 775 dollars – money they do not have because of their pressing day-to-day needs. 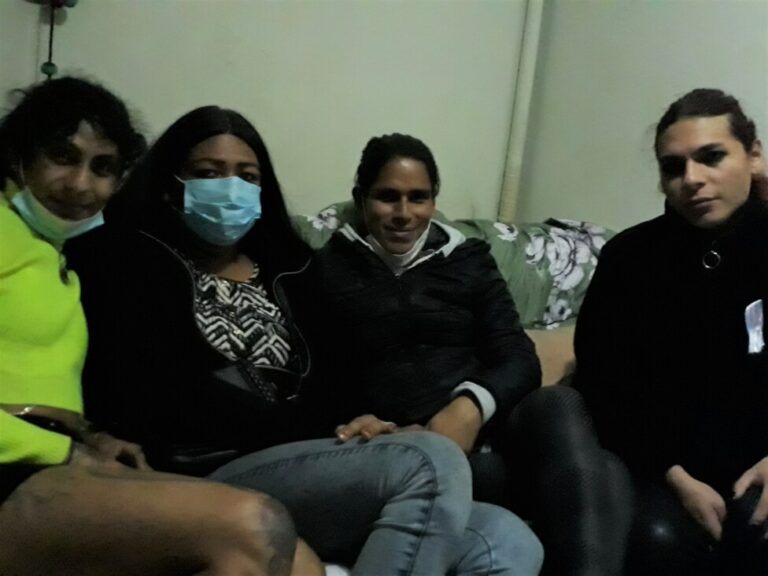 A group of trans women involved in the performing arts told IPS about their forms of resistance to a system that discriminates against them and leaves them “last in line”. From left to right, Gretel, Brisa, Victoria and Gía are friends, they support each other, share their experiences and they all yearn for a dignified life that “deserves to be livable”. CREDIT: Mariela Jara/IPS

“My body is a disturbance”

Gretel Warmicha, 30, is a multidisciplinary artist. She considers herself a trans woman, transvestite and transsexual and she has transitioned – as the process of changing from one sex to another is called – not only in her gender, but in her religion and in “practices that one follows, to detach oneself from this rigid and ignorant masculinity.”

She was living in the Andean city of Cuzco and is now in Lima for work. She considers herself fortunate to have been able to study and to have a support network, but she feels that the most difficult thing is to recognize that she deserves a livable life “due to the heteronormative system” that marginalizes and violates them, and that she and the others experience on a daily basis.

“I am a visible trans person and I have been prey to moments of vulnerability not only of my rights but of my identity, in many ways and places. It is complicated for us to go to the bank, to use health services, to ride a bus, to just walk down the street. You feel people watching you, my body is a disturbance.”

Making the transition to a gender expression that corresponds to their identity and way of life is very difficult for them. Even though in most cases they felt like girls from an early age, they do not have the conditions to live that way in freedom and dignity due to rejection by society.

“In Peru there is no such thing as a trans childhood, many of us transitioned as adults. I did it when the pandemic started,” said Victoria, 32, who preferred not to give her last name.

“They locked us all up at home and I said to myself: how would I want to live if I only had a month left? Is this the life I really want, is this who I really am, is this how I really want to see myself? That was what pushed me to do it, since life is so short and trans life is even shorter, I wanted to enjoy every moment being who I really am,” she said.

To live the identity they identify with means beginning to make changes in their physical appearance that require hormonal therapies. They usually go through this process without proper medical care due to its high cost and their distrust in the system.

“I confess that during the pandemic I had to do sexual service to be able to buy my hormones. Being a trans woman is expensive, you need about 200 soles a month (51 dollars),” she said.

“The state does not give you treatment, only testosterone blockers and condoms, because it is part of the anti-HIV/AIDS program (to which they have access even if they do not have the virus). If there aren’t funds for treatment for HIV, there are even less for us. We will always be the last in line,” she lamented.

She acknowledged that the “word of mouth” system among friends to help each other make the transition is not safe in terms of health because it is likely, for example, that the estrogen that works for one is harmful to another. “But we have no choice, it’s Russian roulette,” she said.

Gia, 33, also gave only her first name. A poet and artist like her friends, she transitioned during the pandemic as well. She recently moved out of the family home due to pressure from her mother; it was no longer a safe environment for her. When asked how she sees herself in the future, she replies: “dead”.

Although if she thinks about what she would like to do in the future, she draws a picture where she owns a television production company and she and her friends have decent jobs. An aspiration shared by all of them, since the precariousness of employment and income is a constant in their lives.

When asked about the life expectancy of trans women, they said the average was 35 years.

“If you don’t die because of health problems, you die because they kill you, which happened to a trans man friend of ours, Rodrigo. He made it to the age of 32, he studied at the university, he had a scholarship to Harvard (in the United States) and a promising future. And despite all that he died for being trans. It’s a reminder that our life is not worth anything,” Gía said, clouding everyone’s faces and plunging the room into silence.