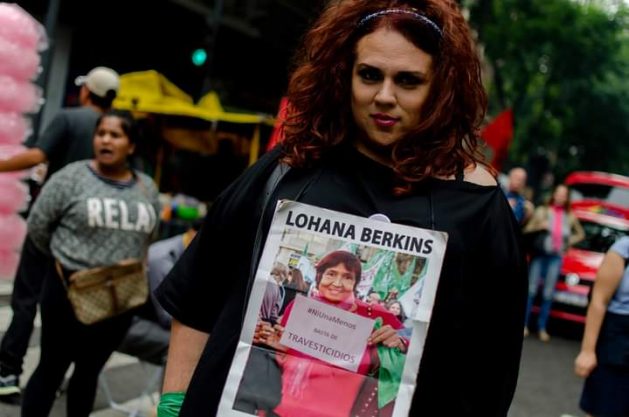 Florencia Guimaraes, a transgender woman who two years ago got a job for the first time in her life, in the public sector, takes part in a demonstration in defense of the rights of the LGTBI collective. Lohana Berkins, whose photo she carries on the banner, was the founder of the Association of the Struggle for the Transvestite-Transsexual Identity, who died in 2016. CREDIT: Courtesy of Florencia Guimares

BUENOS AIRES, Jun 23 2022 (IPS) - “At the age of 35, with a document that says who I really am, I went back to school and finished my studies, which I had left at 14 because I could no longer bear the bullying and mistreatment,” said Florencia Guimaraes, a transgender woman whose life was changed by Argentina’s Gender Identity Law.

The new law passed by Congress in May 2012 was a pioneer in the world, since it allows people to change their gender, name and photo on their identity document, without the need for medical tests, surgeries or hormone treatments.

One of the 12,665 people who did so was Florencia, who today is 42 years old. She was born a boy, but since childhood she felt she was a girl, and for this reason she says that she faced barriers to access education and the labor market, which drove her into sex work for years in order to survive.

“There is nothing special about my story. Exclusion was a direct springboard to prostitution, which most of us started to practice at a very young age. It has to do with the lack of opportunities,” she told IPS.

"The fact that transgender people have no alternative to sex work is slowly changing since the passage of the law, which gave visibility to a group that was discriminated against and hidden, but it is still very recent." -- Esteban Paulón

“The law and our identity documents were tools that empowered us. It’s true that before it was not written down anywhere that we could not study, but we were seen as ‘sick’ and there were mechanisms that expelled us from the educational system,” she added.

Official figures indicate that 62 percent of the 12,665 people who changed their national identity card (DNI) in the last 10 years chose to be female and 35 percent chose to be male. They thus began the slow road to the recovery of their rights in this South American country of 47 million people.

In addition, there are almost three percent (354 people) who recently opted to mark with an “X” the box on their document corresponding to their sex, thanks to a decree signed in July 2021 by President Alberto Fernández recognizing the “non-binary” gender.

Diego Watkins, a 28-year-old trans man who has been the visible face of the Association of Transvestites, Transsexuals and Transgenders of Argentina (ATTTA), says this recognition marked a “before” and “after”.

“I was a person with no identity, no future, no life plan. If I said I had a toothache, they sent me to the psychologist. Knowing and being known who I am gave meaning to my life,” he told IPS.

As a symptom of its current strength, the group has appropriated the term transvestite, traditionally used in Argentina as an insult or in a derogatory fashion. Today, being a transvestite is a political identity and the word is used, precisely, as a banner to vindicate the right to be trans, say members of the community. 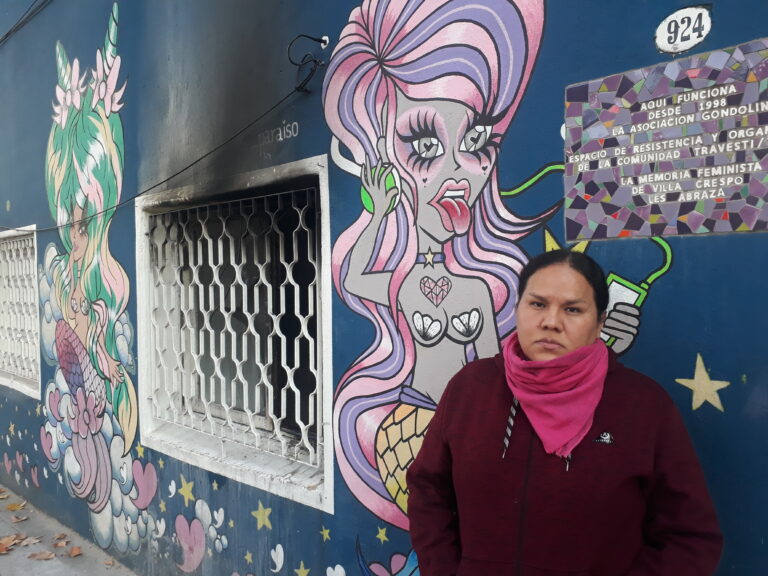 Solange Fabián is a transgender woman and member of the board of directors of the Hotel Gondolín, which houses more than 40 transvestites, many of them sex workers, in Buenos Aires. At the top of the window you can see the aftermath of a fire that occurred this month and according to the residents of Gondolin was intentional and was a hate attack. CREDIT: Daniel Gutman/IPS

The slow road to change

Florencia Guimaraes, who graduated in Gender and Politics at the National University of General Sarmiento, has headed for the last two years the Access to Rights Program for Transvestites, Transsexuals and/or Transgendered Persons at the Magistrates Council of the City of Buenos Aires, the body that administers the Judiciary of the Argentine capital.

“It’s the first time in my life that I’ve gotten a job and this, of course, would not have been possible without the law,” she said.

She is also president of the Casa de Lohana y Diana, a self-managed center for the transvestite community in Laferrere, one of the most populous and poorest suburbs of Buenos Aires.

“We offer training workshops with job opportunities, since most of them, despite the law, are still excluded and survive by means of prostitution,” says Florencia.

According to a 2019 study published by the Public Defense of Buenos Aires, entitled The Butterfly Revolution, only nine percent of the trans population is inserted in the formal labor market and the vast majority have never even gotten a job interview.

LGTBI rights organizations agree that the total transgender population in the country is between 10 and 15 percent higher than the 12,665 people registered. 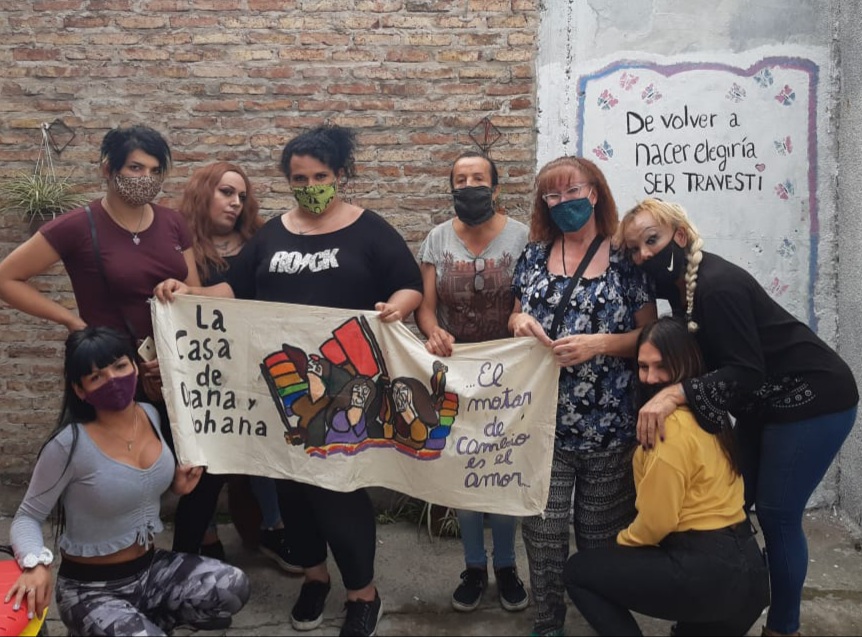 Women from the Casa de Lohana y Diana, a self-managed support space for transgender women that operates in Laferrere, one of the poorest localities in the suburbs of Buenos Aires. In the Casa, courses with job opportunities are offered, with the aim of enabling women to leave sex work. CREDIT: Courtesy of Florencia Guimaraes

“The fact that transgender people have no alternative to sex work is slowly changing since the passage of the law, which gave visibility to a group that was discriminated against and hidden, but it is still very recent,” activist Esteban Paulón, who heads the Institute for LGTB+ Public Policy, a civil society organisation, told IPS from the city of Rosario.

Paulón was undersecretary of Sexual Diversity Policies in the northwestern province of Santa Fe, of which Rosario is the main city. He led a vulnerability survey there in 2019, which reached almost a third of the 1,200 trans people in that province.

The study found that only 46 percent finished high school and only five percent completed tertiary or university studies.

And the results were especially revealing in terms of emotional distress related to gender identity: 75 percent said they had self-harmed with varying frequency and engaged in problematic alcohol consumption; 77 percent had consumed other substances; and 79 percent had eating disorders.

Perhaps the harshest statistic is that, according to estimates by LGTB organizations, the average lifespan is between 35 and 41 years.

And he explained: “The chain of exclusion has made it impossible for transvestites to take care of their health. Many go to the hospital for the first time with an advanced infection caused by AIDS, a disease that today can be managed with medication.”

Valeria Licciardi, a trans woman who became well-known through her participation in the Big Brother reality TV show and now owns a brand of panties designed especially for transvestites, believes that the law is a starting point for social change.

“We were given our place as citizens and our right to identity, to be who we want to be, was recognized,” she told IPS.

But she warned about an undesired effect of the law: “The more we advance in rights, the more hatred and discrimination against us from one sector also grows.”

She cited the example of an arson attack that was reported this month at the so-called Hotel Gondolin, a shelter for the transvestite community that operates in a squat in the Villa Crespo neighborhood of Buenos Aires.

“It was in the early hours of the morning. The police told us that, according to the security camera footage, two men started the fire from the street,” Solange Fabián, a member of the Hotel Gondolín’s board of directors, told IPS. 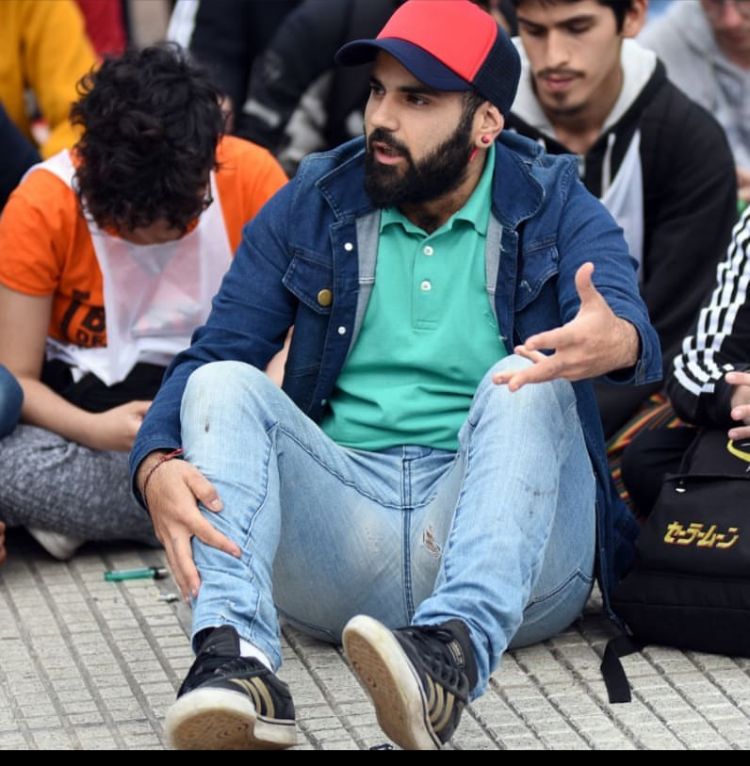 Diego Watkins, a transgender man, received one of the first documents with a new identity in 2012, when the Gender Identity Law came into force in Argentina. A long-time activist of the Association of Transvestites, Transsexuals and Transgenders of Argentina, he is seen in this photo taking part in an assembly. CREDIT: Courtesy of Diego Watkins

Seeking to improve labor inclusion, a presidential decree issued in 2020 established that one percent of jobs in the national public administration must be filled by trans people, and a registry of applicants was created.

“We are making progress in implementation and there are already 300 trans people working, which we estimate to be 0.2 percent of the total number of public sector positions,” Greta Peña, undersecretary for Diversity Policies at the Ministry of Women, Genders and Diversity, told IPS.

“We also have 6,007 people listed in the registry, which indicates that there is a great desire among the trans community to go out and work,” she added.

This year, the Undersecretariat launched a one-time economic assistance plan for trans people over 50 years of age, consisting of six minimum wages, since this is the group facing the greatest difficulties in entering the labor market.

“Although no regulation resolves structural violence by itself, the gender identity law has been a milestone in the democratic history of this country, which has not only had an impact on trans people but on the entire population,” Peña said.