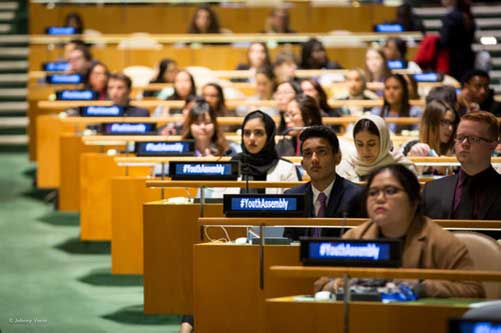 KATHMANDU, Nepal, Sep 5 2022 (IPS) - There are many ways the UN can have a sizeable role in promoting the engagement and participation of youth and helping them becoming a central pillar of a new way of doing policy-making.

After all, if we want to rethink the relationships between the state and citizens, the foundation of a new Social Contract as envisioned by UN Secretary General Antonio Guterres, youths must be enabled to have a voice and an agency powerful enough to directly influence decision making, locally and globally.

At the former level, the UN can set up UN Youth National Forums or Assemblies wherever it operates. Such entities would be more then tokenistic forums where meetings happen on “off basis” but instead would be structured as permanent mechanisms with a power of not only advising but also monitoring the work being carried out by the UN Country Teams.

Having in place such forums locally would pave the way for bolder action at the higher levels, on the international arena.

It is here where there is a great deal of scope for the UN to model a truly radical change in terms of youths’ participation globally, raising the bar in terms of what youths’ involvement means and what it can imply.

If we truly create pathways for youths to play a more central role and we generate a structure or mechanism for them to fulfill such responsibilities, international politics, while would not drastically change overnight, surely would be impacted.

This is the reason why Guterres should strive for something that, though discussed in the past, was never close enough to be fully considered nor implemented.

I am referring to the idea of creating a permanent UN Youth Assembly that would autonomously act alongside of the established General Assembly and would become a forum where youths from around the world can discuss and set the policy course.

This permanent mechanism could either be linked up with the assemblies or forums that the UN could establish at national level or could simply have a completely different, standing alone nature with its members being selected at national levels through transparent and competitive process.

While we cannot imagine at the moment that such body would yield any veto power, it could, for example, have a symbolic, though powerful role especially in making its voice heard by the major global powers.

For example, it would have access, on consistent basis, to the UN Security Council, the most consequential institution within the international community.

While the official positions of its members, results of government-to-government negotiations behind the curtain, won’t be altered, at least they could be openly challenged.

Imagine some representatives of the UN Youth Assembly addressing, after their own deliberations, the sessions of the Security Council: this would be a powerful reminder to the world leaders that youths can dare to think differently.

The working modality of this envisioned UN Youth Assembly could become a template for participation and transparency where inputs and feedbacks from youths around the world could make such assembly truly owned by all the youths from across the world.

Ensuring a strong connection between this assembly and the youths around the world is as vital as daunting.

The risk is that any bold attempt of creating a new world body for youths to be involved in the decision making could become an elitist platform where only the most connected youths would participate.

Instead of bringing in youths from disadvantaged groups, the “usual suspects”, youths from well off families with access to opportunities, would “capture” their new “toy”.

That’s why it is vital that UN agencies and programs around the world do a better job at promoting civic engagement and participation, enabling innovative pathways for also the less advantaged youths to participate and deliberate.

Setting up national mechanisms for the UN to engage youths at national level could offer a pipeline for a more diverse crop of youths to have a chance to be involved and participate.

Investing in capacity building of youths is more and more critical.

Thanks to innovative partnerships with civil society, trainings, courses, institutes or academies could offer a way for the UN to create a sort of “upward mobility” in terms of opportunities to participate for many youths now excluded.

In addition, the members UN Youth Assembly should be chosen on rotation basis and exercise their duties for short periods like six months or at the longest, one year as such short mandates would give chances to more youths to be in the Assembly.

Moreover, a way to ensure a deep link between this new body and the ground reality, each of its representatives would be supported by a deliberative group at national level, a further connection between local youths and the international arena.

Imagining such body comes with risks.

In relation to its duties and responsibilities, the UN Youth Assembly could be easily become object of derision.

It would be seen as another tokenistic tool that governments could use to promote some forms of reforms that in reality, instead, would continue to legitimize the current status quo in terms of decision making and power relations.

That’s why it is important that UN Youth Assembly is provided with the analytical and research tools that would make it an authoritative source of insights and proposals from a youths’ perspective.

Youths led deliberations should be based on a proper process of accessing to the best available information and through a very structured exercise of deliberative process that would, ultimately, end up with recommendations or proposals, also in forms of policy briefs.

Setting up a UN Youth Assembly won’t preclude other forms of youth’s activism and participation.

For example, we have seen with climate activism, how forceful youths’ actions have to be in order to become visible and noticed.

The Assembly would be just another way, now completely missing, for youths to properly channel their opinions and voices, overcoming the multitude of improvised consultation mechanisms that are often created for major global leaders ‘gatherings whose impacts are close to nil.

Moreover, like the UN Youth National Forums or Assemblies locally, the UN Youth Assembly could be given some limited binding powers in steering the course of the UN agencies and programs, having a clear voice and power in deciding their global strategies and priorities.

The future of youths’ participation aimed at setting the global agenda will be a mix of different and yet complementary actions from the ground and from the top alike.

Peaceful manifestations, including those of civil disobedience, have a place together with other forms of youths’ involvement.

Having a new global platform to express their voices should not be seen as a way to stifle bottom-up initiatives but, rather, as another way to help transform the way political power is exercised.

Simone Galimberti is the Co-Founder of ENGAGE, a not-for-profit NGO in Nepal. He writes on volunteerism, social inclusion, youth development and regional integration as an engine to improve people’s lives.