NEW YORK, Sep 14 2022 (IPS) - Cross-continent vacations seem to be the norm once again with the lessening of COVID-19 while new cities are being built with skyscraping $4M condos shooting up in a matter of months, and just-out-of-University millennials launching into their careers with minimum start-off salaries of $75K.

Those scenarios present a shocking oxymoron to newly-released facts that shockingly, 90 percent of the world’s nations are currently undergoing gravely altered lives due to a downward spiral of human development over the past two years.

Results of the survey show that for the first time in 32 years of calculating the world’s well-being, nine out of every 10 countries have fallen backwards in health, education, and standard of living. The organization says that although there are many reasons for the degradation, continuous effect of back-to-back crises, such as the COVID-19 pandemic, are the most to be blamed.

Achim Steiner, UNDP Administrator, pinpointed areas showing that human development has fallen back to its 2016 levels and that world leaders find themselves collectively paralyzed in making changes. Steiner added that the current state of regress thwarts the U.N.’s 2030 deadline at achieving the UN’s 17 Sustainable Development Goals (SDGs).

Other draining factors include the exorbitant increase in cost of living; unemployment; artificial intelligence chosen over human activity rather than using it to maximize existing tasks.

There is also digitalization – “a double-edged sword for mental wellbeing;” mental distress, which constrains freedom to achieve plus the climate and energy crises. But those get easily sutured up by subsidizing fossil fuels; lack of access to adequate resources, as well as persistent and growing inequalities.

These all negatively affect and delay long-term goals as well as necessary systemic changes, and causes insecurity in both the leaders as well as the population.

Speaking during the launch of the HDR, António Guterres U.N. Secretary General said the current crises creates an uneven economic recovery from the pandemic and is further exacerbating inequalities, leaving entire regions behind.

“This is triggering spikes in food and energy prices, driving up inflation and drowning vulnerable countries in debt,” he said.

The most under-developed nations in South America, the Caribbean, Sub-Saharan Africa, and South Asia, are hardest hit. For example, Pakistan – which already had a very low rating on the index, has fallen 7 places lower. It now ranks 161, on the HDI, out of 192 countries, while Afghanistan rings in at the 180th position.

The Report, titled “Uncertain Times, Unsettled Lives: Shaping our Future in a Transforming World” was released just a day prior to the UNDP’s high-level assembly of global leaders, the SDG Media Summit, highlighting those who are driving social change to advance the Sustainable Development Goals.

Isis Jaraud-Darnault, Political Coordinator of The Permanent Mission of France to the U.N., spoke on France’s participation with the European Union to alleviate woes in the entire Horn of Africa region.

France is especially aiding the food crisis in Somalia by dispatching a Special Envoy to the country, as well as keeping its promise to provide continuous financial aid (which has amounted to €61 million in 2022), and also launching a humanitarian airlift to provide emergency food and medicine, especially to areas hard to reach by road. “The international community must mobilize”, Jaraud-Darnault said. “France is taking its full part in this aid.” 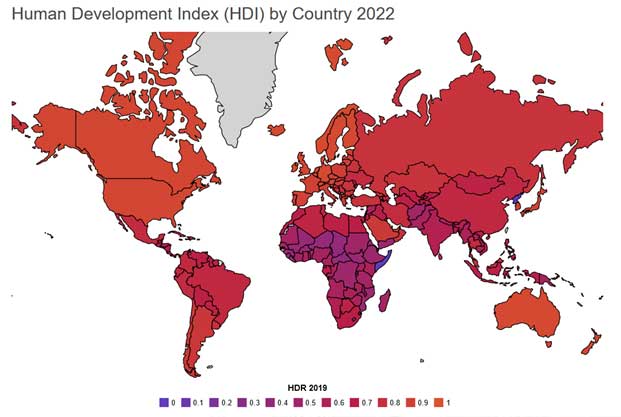 Despite the dark clouds, despair, doubts that grip many countries, along with the fact that recovery is uneven and partial, some seem to be dusting off their heels and getting back on their feet.

The UNDP holds onto the hope of positivity and promise by expressing the sentiments that if futures are reimagined, refreshed and renewed; pathways carved and molded; plans, goals and values are developed then there has to be an uptick – as nothing lasts forever – not even the bad.

Guterres’ reiterated the Report’s clearly-stated steps forward to quench this conundrum, which was to “Double down on human development and advance policies around ‘The Three I-s’ – investment, insurance, and innovation.” He added, “We must invest in global public goods; expand insurance through social safety nets; and innovate, fostering new pathways and technologies.”

The UNDP report depicts a totally overwhelmed global society staggering from crisis to crisis. Steiner adds. “This risks heading towards increasing deprivation and injustice and in a world defined by uncertainty, we need a renewed sense of global solidarity to tackle our inter connected interconnected, common challenges.”

Lorraine Farquharson is a writer / essayist and an investigative freelance journalist seeking to raise awareness and lessen the woes of humanitarian issues. She has travelled to more than 30 countries and written articles for several international news organizations based at the United Nations.