SYDNEY and KUALA LUMPUR, Oct 10 2022 (IPS) - The dogmatic obsession with and focus on fighting inflation in rich countries are pushing the world economy into recession, with many dire consequences, especially for poorer countries. This phobia is due to myths shared by most central bankers.

Myth 1: Inflation chokes growth
The common narrative is that inflation hurts growth. Major central banks (CBs), the Bretton Woods institutions (BWIs) and the Bank of International Settlements (BIS) all insist inflation harms growth despite all evidence to the contrary. The myth is based on a few, very exceptional cases.

“Once-in-a-generation inflation in the US and Europe could choke off global growth, with a global recession possible in 2023”, claimed the World Economic Forum Chief Economist’s Outlook under the headline, “Inflation Will Lead Inexorably To Recession”.

The Atlantic recently warned, “Inflation Is Bad… raising the prospect of a period of economic stagnation or even a recession”. The Economist claims, “It hurts investment and makes most people poorer”.

Without evidence, the narrative claims causation runs from inflation to growth, with inevitable “adverse” consequences. But serious economists have found no conclusive supporting evidence.

World Bank chief economist Michael Bruno and William Easterly asked, “Is inflation harmful to growth?” With data from 31 countries for 1961-94, they concluded, “The ratio of fervent beliefs to tangible evidence seems unusually high on this topic, despite extensive previous research”.

OECD evidence for 1961-2021 – Figures 1a & 1b – updates Bruno & Easterly, again contradicting the ‘standard narrative’ of major CBs, BWIs, BIS and others. The inflation-growth relationship is strongly positive when 1974-75 – severe oil spike recession years – are excluded.

The relationship does not become negative even when 1974-75 are included. Also, the “Great Inflation” of 1965-82 did not harm growth. Hence, there is no empirical basis for setting a particular threshold, such as the now standard 2% inflation target – long acknowledged as “plucked from the air”! 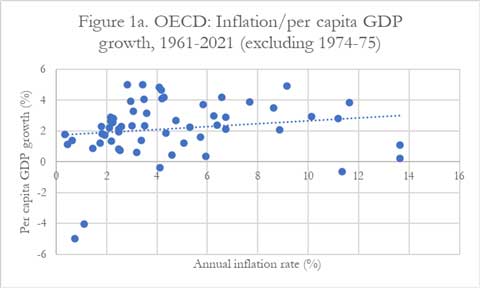 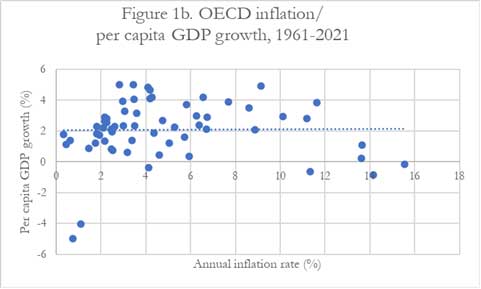 Developing countries also have a positive inflation-growth relationship if extreme cases – e.g., inflation rates in excess of 20%, or ‘excessively’ impacted by commodity price volatilities, civil strife, war – are omitted (Figures 2a & 2b).

Figure 2a summarizes evidence for 82 developing countries during 1991-2021. Although slightly weakened, the positive relationship remained, even if the 1981-90 debt crises years are included (Figure 2b). 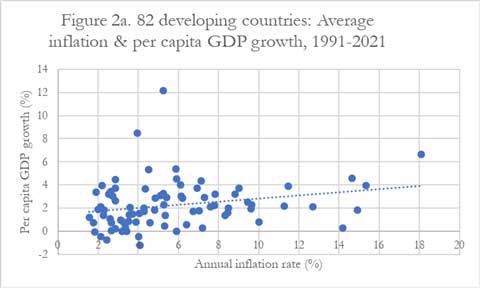 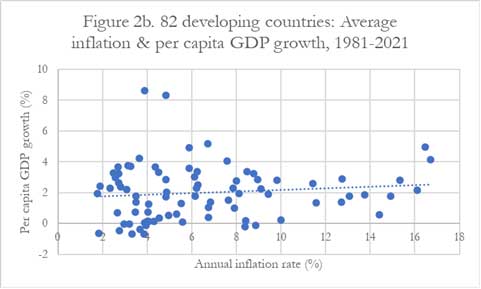 Myth 2: Inflation always accelerates
Another popular myth is that once inflation begins, it has an inherent tendency to accelerate. As inflation supposedly tends to speed up, not acting decisively to nip it in the bud is deemed dangerous. So, the IMF chief economist advises, “Don’t let inflation ‘genie’ out of the bottle”. Hence, inflation has to be ‘nipped in the bud’.

But, in fact, OECD inflation has never exceeded 16% in the past six decades, including the 1970s’ oil shock years. Inflation does not accelerate easily, even when labour has more bargaining power, or wages are indexed to consumer prices – as in some countries.

Dornbusch & Fischer also stressed, “Most episodes of moderate inflation were triggered by commodity price shocks and were brief; very few ended in higher inflation”. Importantly, they warned, “such [moderate] inflations can be reduced only at a substantial … cost to growth”.

Myth 3: Hyperinflation threatens
Although extremely rare, avoiding hyperinflation has become the pretext for central bankers prioritizing inflation prevention. Hyperinflation – at rates over 50% for at least a month – is undoubtedly harmful for growth. But as IMF research shows, “Since 1947, hyperinflations in market economies have been rare”.

Many of the worst hyperinflation episodes in history were after World War Two and the Soviet demise. Bruno & Easterly also mention breakdowns of economic and political systems – as in Iran or Nicaragua, following revolutions overthrowing corrupt despotic regimes.

A White House staff blog noted, “The inflationary period after World War II is likely a better comparison for the current economic situation than the 1970s and suggests that inflation could quickly decline once supply chains are fully online and pent-up demand levels off”.

Myth 4: Evidence-based policymaking
Central bankers love to claim their policymaking is evidence-based. They cite one another and famous economists to enhance the aura of CB “credibility”.

Unsurprisingly, the Reserve Bank of New Zealand promoted its arbitrary 2% inflation target mainly by endless repetition – not strong evidence or superior logic. They simply “devoted a huge amount of effort” to preaching the new mantra “to everybody who would listen – and some who were reluctant to listen”.

The narrative also suited those concerned about wage pressures. Fighting inflation has provided an excuse to further weaken workers’ working conditions and pay. Thus, labour’s share of income has been declining since the 1970s.

Greater central bank independence (from the executive) has enhanced the influence and power of financial interests – largely at the expense of the real economy. Output and employment growth weakened as a result, worsening the lot of the many, especially in the global South.

Before becoming Fed chair, Ben Bernanke’s research team concluded, “an important part of the effect of oil price shocks [in the 1970s] on the economy results not from the change in oil prices, per se, but from the resulting tightening of monetary policy”.

Thus, central bank interventions have caused contractions without reducing inflation. The longest US recession after the Great Depression – in the early 1980s – was due to Fed chair Paul Volcker’s 1979-81 interest rate hikes.

A New York Times opinion-editorial recently warned, “The Powell pivot to tighter money in 2021 is the equivalent of Mr. Volcker’s 1981 move”, and “the 2020s economy could resemble the 1980s”.