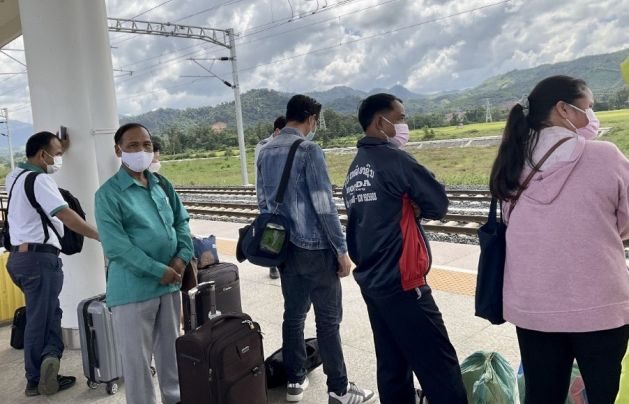 VIENTIANE, Laos, Oct 18 2022 (IPS) - Mountainous terrain in northern Laos has until now restricted chances for farmers and producers in much of the nation to export their goods, limiting them primarily to subsistence farming and also curbing development, education and poverty reduction in their communities.

But as infrastructure and transportation in the “land of a million elephants” grows, the southeast Asian nation is moving from landlocked to land-linked. The Laos-China Railway is the most notable of these transformations, creating a high-speed means of bringing people and products through some of the most remote provinces, particularly in the north, and giving farmers access to new markets to sell their goods.

Living in a fertile and relatively large country with a small population, Laotian farmers are primed to move “beyond feeding themselves, from subsistence farming to enterprise farming, - Because farmers tend to plough their profits into their families and communities, supporting their earning potential directly benefits communities

It’s still too soon to gauge the economic impact of the railway, which opened in December 2021, on nearby communities. Through the Hand in Hand Initiative (HiH), the United Nations Food and Agriculture Organization (FAO) aims to harness the potential of this blank slate to benefit Laotian farmers by attracting investors who will support the development of a green economic corridor along the track to sustainably empower the local communities that act as stewards of the land.

HiH is an evidence-based, country-owned and led initiative of the FAO to accelerate agricultural transformation, with the goal of eradicating poverty, ending hunger and malnutrition, and reducing inequalities. The initiative was supporting 52 countries in Africa, Asia, Europe, Latin America, and the Middle East as of May 2022.

Investment in Laos via the HIH has the power to expand market options for producers and also improve their collective bargaining power and earning potential. Currently many of these farmers yield small harvests not because of natural circumstances but because of the lack of buyers, processers and exporters of their crops and livestock.

Living in a fertile and relatively large country with a small population, Laotian farmers are primed to move “beyond feeding themselves, from subsistence farming to enterprise farming,” says FAO Country Representative Nasar Hayat. Because farmers tend to plough their profits into their families and communities, supporting their earning potential directly benefits communities, he added in an interview with IPS.

“When a farmer earns, they put that money into homes, into their children’s nutrition and education, into local businesses. They don’t take a trip to Europe and drain the funds from their communities.”

In order to tap into this earning potential, Hayat says that Laotian farmers must work collectively and be supported through market accessibility, scientific training, and research and development, all of which can be supported by investors. These advances can pave the way for positive long-term development, he added.

While the fertile southern and central plains of Laos have historically been seen as the country’s breadbasket, the initiative aims to increase the capacity of the mountainous north. As a result, tea (which grows in the mountain forests) cassava (which can be cultivated on slopes) and livestock (which can be raised in any terrain) are the commodities included in the HiH. 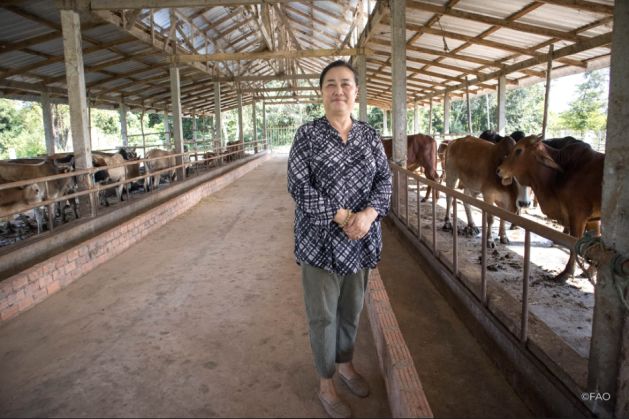 The owner of Nam Phu Vieng farm, Mrs. Vanheung Duanglasy, poses with her cattle outside of Vientiane, Laos. Credit: FAO

Only one tea factory

In the misty, mountainous northern province of Oudomxay, in the village of Ban Phouhong (population 270), members of the Khmu ethnic group have been earning their livelihoods by picking tea in traditional ways for the last eight years. Plucking the leaves takes skill and dexterity and the leaves are potentially highly valuable, but pickers in Ban Phouhong have unfortunately seen their profits limited by a meagre market: only one factory is accessible, giving its owner a de facto monopoly over the area’s tea.

As a result, the factory owner has kept the prices he pays growers low, not at all in step with inflation rates and the rising cost of living. Picked tea earns just 15,000-20,000 Lao Kip per kilo (US$1.20), a rate which has stayed steady while food and gasoline prices have soared.

The limited market also means that only two-thirds of the trees’ valuable leaves are being picked, because these older leaves are the only ones purchased and processed by the nearby factory. Meanwhile, the tea buds, which can be the most valuable part of the plant, are left unpicked. Investment in Ban Phouhong could give pickers access to their own means of processing these valuable buds.

Also, while the workers have been trained in picking, they lack the knowledge necessary to grow their own enterprises: “We want to plant more seedlings, but we don’t know how. Only one family knows how to plant seedlings, and they have not been here for years,” said one picker. With investment, the villagers hope to get the scientific training they need to take control of their own growing potential.

Outside of the capital Vientiane, in May Park Ngum, a group of cassava farmers has been wasting up to 15 metric tonnes of cassava per day of harvest, amounting to about 100 metric tonnes of wasted cassava each year, because of the limits of their local cassava market.

The story of these farmers highlights how the potential benefits of Laos’ new connectivity are not limited to rural, remote provinces. After one export middleman failed to pay the May Park Ngum growers for their cassava – a debt amounting to about $1,200 per family – the farmers have been reticent to accept anything but cash for their crops. As a result, they have reduced their growing area by half and have also been stockpiling unsold cassava, much of which they have had to throw away because it has gone bad. 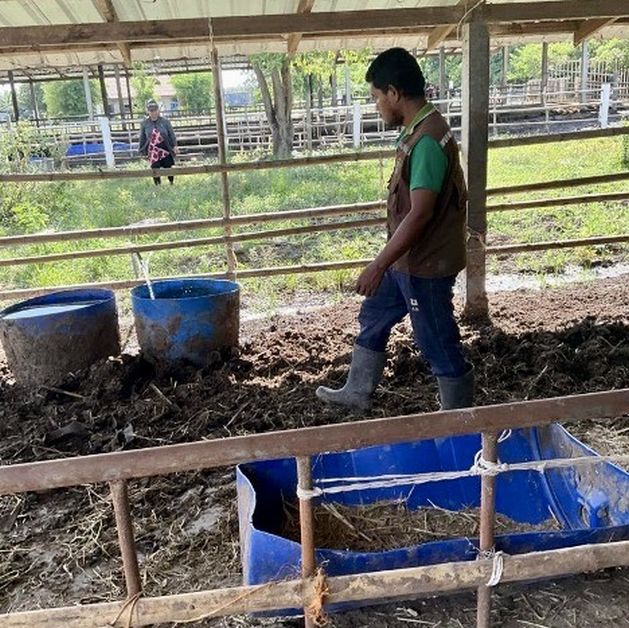 However, with more reliable buyers, the farmers could maintain their current organic growing methods while doubling their growing potential, in turn doubling the earnings of their 50 hourly workers and, most importantly, ensuring their crops are not wasted.

Taking full advantage of the railway’s market-expanding power depends on following strict export regulations. For livestock, export requires vaccination to prevent the spread of transboundary diseases. While initial vaccination is costly, it pays for itself several times over through profits.

The owner and operator of Nam Phu Vieng farm in Vientiane Province, Vanheung Duanglasy, says that the high cost of vaccinating against lumpy skin disease prevents her from selling more of her animals, despite the fact that she has the capacity to raise far more. While she has contacts with reliable buyers in Vietnam, vaccination costs about $45 per cow every three months, significantly limiting how many cows she is able to raise for sale.

Like the cassava farmers, the owner of Nam Phu Vieng says that with investment and more buyers her farm could produce far more, expanding her profits and allowing her to hire more workers from her local community.