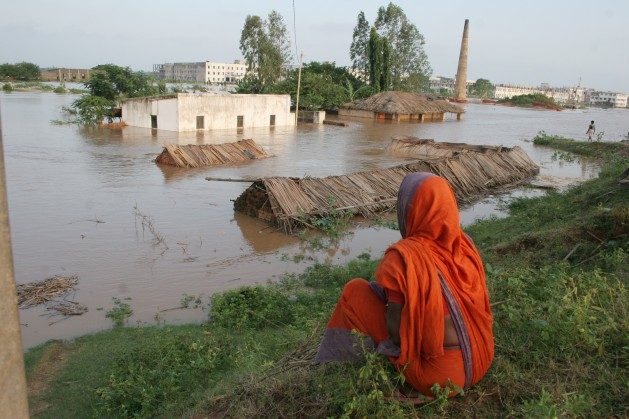 “To force poor countries to repay a loan to cope with a climate crisis they hardly caused is profoundly unfair. Instead of supporting countries that are facing worsening droughts, cyclones and flooding, rich countries are crippling their ability to cope with the next shock and deepening their poverty.” Credit: Credit: Manipadma Jena/IPS.

MADRID, Nov 4 2022 (IPS) - Just a few days ahead of the UN Climate Conference (COP27) in Egypt (6-18 November), new revelations show how far rich, industrialised countries –those who contribute most to the growing catastrophes- have been lying over their real contributions to climate finance.

The True Value of Climate Finance Is a Third of What Developed Countries Report unveils that many rich countries are using “dishonest and misleading” accounting “to inflate” their climate finance contributions to developing countries – in 2020 by as much as 225%, according to investigations by Oxfam International.

Rich countries' contributions not only continue to fall miserably below their promised goal but are also very misleading in often counting the wrong things in the wrong way. They're overstating their own generosity by painting a rosy picture that obscures how much is really going to poor countries

The global climate finance target is supposed to be 100 billion US dollars a year, an amount which is slightly more than the 83 billion US dollars the world’s biggest nuclear powers spent in one single year– 2021, on such weapons of mass destruction.

Furthermore, “the combined profits of the largest energy companies in the first quarter of this year are close to 100 billion US dollars,” said already last august the UN Secretary-General António Guterres, adding that it was “immoral” that major oil and gas companies are reporting “record profits”, while prices soar.

Moreover, “rich countries’ contributions not only continue to fall miserably below their promised goal but are also very misleading in often counting the wrong things in the wrong way. They’re overstating their own generosity by painting a rosy picture that obscures how much is really going to poor countries,” said Nafkote Dabi, Oxfam International Climate Policy Lead.

“Our global climate finance is a broken train: drastically flawed and putting us at risk of reaching a catastrophic destination. There are too many loans indebting poor countries that are already struggling to cope with climatic shocks.”

There is too much “dishonest” and “shady” reporting. The result is the most vulnerable countries remain ill-prepared to face the wrath of the climate crisis, warned Dabi.

Oxfam research found that instruments such as loans are being reported at face value, ignoring repayments and other factors. Too often funded projects have less climate focus than reported, making the net value of support specifically aiming at climate action significantly lower than actual reported climate finance figures.

Currently, loans are dominating over 70% provision (48.6 billion US dollars) of public climate finance, adding to the debt crisis across developing countries.

“To force poor countries to repay a loan to cope with a climate crisis they hardly caused is profoundly unfair. Instead of supporting countries that are facing worsening droughts, cyclones and flooding, rich countries are crippling their ability to cope with the next shock and deepening their poverty.”

Such ‘funding’ is primarily based on loans

“A climate finance system that is primarily based on loans is only worsening the problem. Rich nations, especially the heaviest-polluting ones,” said Dabi.

A key way to prevent a full-scale climate catastrophe is for developed nations to fulfil their 100 billion US dollars commitments and genuinely address the current climate financing accounting holes. “Manipulating the system will only mean poor nations, least responsible for the climate crisis, footing the climate bill,” said Dabi.

Other findings by this global confederation which includes 21 member organisations and affiliates reveal that an average of 189 million people per year have been affected by extreme weather-related events in developing countries since 1991 – the year that a mechanism was first proposed to address the costs of climate impacts on low-income countries.

The report, The Cost of Delay, by the Loss and Damage Collaboration – a group of more than 100 researchers, activists, and policymakers from around the globe – highlights how rich countries have repeatedly stalled efforts to provide dedicated finance to developing countries bearing the costs of a climate crisis they did little to cause.

“Analysis shows that in the first half of 2022 six fossil fuel companies combined made enough money to cover the cost of major extreme weather and climate-related events in developing countries and still have nearly $70 billion profit remaining.”

The report reveals that 55 of the most climate-vulnerable countries have suffered climate-induced economic losses totalling over half a trillion dollars during the first two decades of this century as fossil fuel profits rocket, leaving people in some of the poorest places on earth to foot the bill.

It also reveals that the fossil fuel industry made enough super-profit between 2000 and 2019 to cover the costs of climate-induced economic losses in 55 of the most climate-vulnerable countries, almost sixty times over.

The report estimates that since 1991, developing countries have experienced 79% of recorded deaths and 97% of the total recorded number of people affected by the impacts of weather extremes.

The analysis also shows that the number of extreme weather and climate-related events that developing countries experience has more than doubled over that period with over 676,000 people killed.

The entire continent of Africa produces less than 4% of global emissions and the African Development Bank reported recently the continent was losing between five and 15% of its Gross Domestic Product (GDP) per capita growth because of climate change.

Lyndsay Walsh, Oxfam’s Climate policy adviser and co-author of the report said: “It is an injustice that polluters who are disproportionately responsible for the escalating greenhouse gas emissions continue to reap these enormous profits while climate-vulnerable countries are left to foot the bill for the climate impacts destroying people’s lives, homes and jobs.”

Meanwhile, in addition to manipulating the figures and further indebting the poor, business continues as usual. The largest polluters–the fossil fuels private companies make more and more profits, and rich countries’ politicians are set to increase their subsidies to these fuels to nearly seven trillion by 2025.