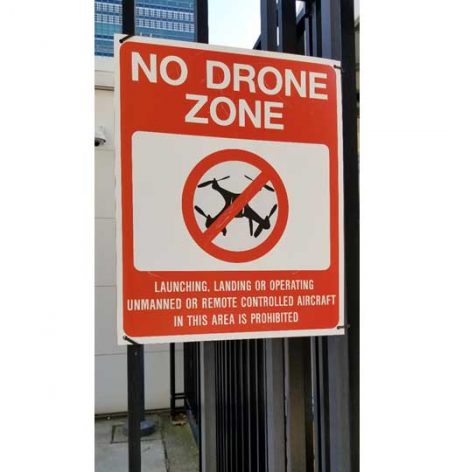 UNITED NATIONS, Nov 28 2022 (IPS) - A sign outside the United Nations reads, perhaps half-seriously, that it is a “No Drone Zone”—and “launching, landing or operating Unmanned or Remote-Controlled aircraft in this area is prohibited”.

The “warning” comes even as Unmanned Aerial Vehicles (UAVs) – or drones – are some of the new weapons of war deployed mostly by the US, and more recently, by Iran, Ukraine and Russia in ongoing military conflicts.

But the unarmed versions continue to be deployed by UN peacekeeping forces worldwide and by national and international humanitarian organizations.

In a recently-released report, the UN Population Fund (UNFPA says for women in Botswana, especially those living in remote communities where medical supplies and blood may not be in stock, giving birth can be life-threatening.

In 2019, the country recorded a maternal mortality rate of 166 deaths per 100,000 births, more than double the average for upper-middle-income countries.

Lorato Mokganya, Chief Health Officer in the Ministry of Health and Wellness, is quoted as saying that when a woman has lost a lot of blood during childbirth and may need to be transferred to a bigger medical facility, she first needs to be stabilized where she is before being driven out of that place. Timely delivery of blood can be lifesaving.

“A drone can be sent to deliver the blood so that the patient is stabilized,”

In an effort to curb the country’s preventable maternal deaths and overcome geographical barriers this innovative initiative will revolutionize the delivery of essential medical supplies and services across Botswana, says UNFPA.

Joseph Chamie, a former director of the UN Population Division and a consulting demographer., told IPS the increased use of drones for humanitarian and peacekeeping missions of the United Nations is certainly a good idea and should be encouraged.

“Why? Simply because the numerous benefits from the use of drones greatly outnumber the possible disadvantages”.

Also, it should be acknowledged that drones could be misused and efforts are needed to ensure privacy, security and safety, said Chamie.

“In brief, the use of drones should be promoted and facilitated in the work of the UN’s humanitarian and peacekeeping operations as it will greatly enhance the effectiveness of their vital work,” he declared. 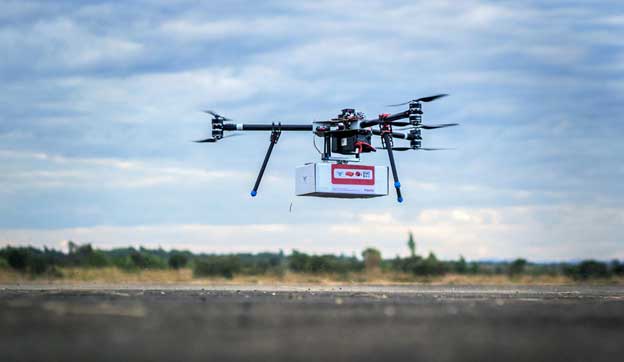 Drones have been deployed in several UN peacekeeping missions, including the Democratic Republic of Congo (DRC), Rwanda and Uganda—going back to 2013.

Although this technology is not a magic solution, “the promise of drones is really tremendous,” says Christopher Fabian, principal advisor on innovation at the UN Children’s Fund (UNICEF).

For UNICEF and other humanitarian and development agencies, he said, in an interview with UN News, drone technology can make a big difference in three ways.

First, drones can leapfrog over broken infrastructure in places where developed transportation networks or roads do not exist, carrying low-weight supplies.

Second, UAVs can be used for remote sensing, such as gathering imagery and data, in the wake of natural disasters like mudslides, to locate where the damage is and where the affected peoples are.

Third, drones can extend wi-fi connectivity, from the sky to the ground, providing refugee camps or schools with access to the Internet.

As big as a Boeing 737 passenger jet and as small as a hummingbird, a huge variety of drones exist. According to research firm Gartner, total drone unit sales climbed to 2.2 million worldwide in 2016, and revenue surged 36 per cent to $4.5 billion.

Although UNICEF’s use of drones has been limited, the agency is exploring ways to scale up the use of UAVs in its operations, Fabian said.

“Hardware itself does not violate human rights. It is the people behind the hardware,” said Fabian, stressing the need to “make sure that any technology we bring in or work on falls within the framing of rights-based documents,” such as the Convention on the Rights of the Child.

UNICEF has a set of guiding principles for innovation, which includes elements like designing with the end-user.

For drone applications to spread further, Fabian said, the UN has a strong role in advocating this technology and ensuring that policy is shared with different governments.

In addition, governments have to clearly define why they need drones and what specifically they will be used for, while also building up national infrastructure to support their use.

The private sector must understand that the market can provide them real business opportunities.

“I believe this technology will go through a few years of regulatory difficulty but will eventually become so ubiquitous and simple that it’s like which version of the cell phones you have rather than have you ever use the mobile phone at all,” he said.

Meanwhile, armed UAVs are being increasingly used in war zones in the Middle East, Asia, Africa and most recently Ukraine.

The US has launched drone strikes in Pakistan, Syria, Yemen, Somalia, Iraq, Libya and Afghanistan targeting mostly terrorist groups. But the negative fallout has included the deaths of scores of civilians and non-combatants.

In recent months, the use of drones by both Russia and Ukraine has triggered a raging battle at the United Nations while Iran has launched drone attacks inside Iraq.

The US, France, UK and Germany have urged the UN to investigate whether the Russian drones originated in Iran. But Russia has denied the charge and insisted the drones were homemade.

Russia’s First Deputy Permanent Representative to the UN, Ambassador Dmitry Polyanskiy, urged Secretary-General António Guterres and his staff on October 25 not to engage in any “illegitimate investigation” of drones used in Ukraine.

Meanwhile, going back to 2017, Malawi, in partnership with UNICEF, launched Africa’s first air corridor to test the humanitarian use of drones in Kasungu District.

Also with UNICEF, Vanuatu has been testing the capacity, efficiency and effectiveness of drones to deliver life-saving vaccines to inaccessible, remote communities in the small Pacific- island country, according to the United Nations.

Vanuatu is an archipelago of 83 islands separated over 1,600 kilometres. Many are only accessible by boat, and mobile vaccination teams frequently walk to communities carrying all the equipment required for vaccinations – a difficult task given the climate and topography.

To extend the use of drones, UNICEF and the World Food Programmes (WFP) have formed a working group.

In addition, UNICEF, together with the Office of the UN High Commissioner for Refugees (UNHCR), chairs the UN Innovation Network, an informal forum that meets quarterly to share lessons learned and advance discussions on innovation across agencies, the UN points out.

“Drones are also used in other parts of the UN system. The International Atomic Energy Agency (IAEA) and its partners have introduced a new quadcopter drone to visually map gamma radiation at Japan’s Fukushima Daiichi nuclear plant, which was damaged by the devastating 2011 tsunami”.

ROMEO, or the Remotely Operated Mosquito Emission Operation, met the competition’s aim of improving people’s lives. It was designed to transport and release sterile male mosquitoes as part of an insect pest birth control method that stifles pest population growth.

Some UN peacekeeping missions, such as those in the Democratic Republic of the Congo, Mali and the Central African Republic, have deployed unarmed surveillance UAVs to improve security for civilians, according to the UN.

The UN, however, warns that drone technology can be a double-edged sword. UN human rights experts have spoken out against the lethal use of drones.