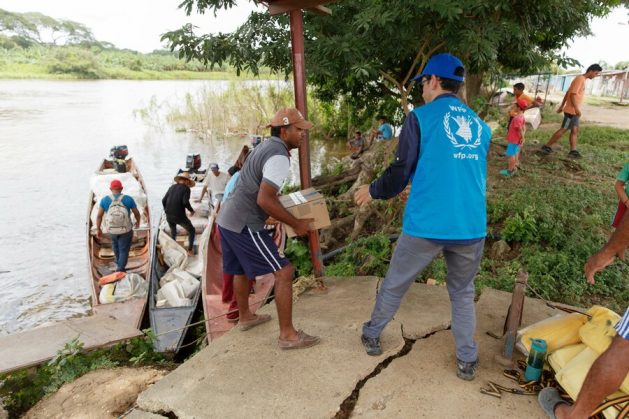 The World Food Program has been active in Venezuela since last year, delivering bags of food to families of schoolchildren in some poor areas, such as remote areas accessed by river in the Arismedi municipality, in the southwestern plains state of Barinas. CREDIT: Gabriel Gómez/WFP

When the pact was signed on Nov. 26, renowned nutritionist Susana Raffalli published a photograph of the legs of a girl whose height is eight centimeters shorter than what is appropriate for her age. “I measured her today. Her growth has been irreversibly stunted,” she said.

“Between the first announcement of the social roundtable (meetings to that purpose were already held in 2014) and the one signed today in Mexico, a generation of Venezuelans like her was born. The agreement is not a trophy. It is a commitment to hope,” Raffalli stated.

The Social Agreement signed in Mexico “is an important contribution, which could mean urgent aid for children, the elderly, the disabled and indigenous people, whose situation is extremely critical,” Roberto Patiño, founder of Alimenta la Solidaridad, a network of soup kitchens for children, told IPS.

The resources involved in the agreement are Venezuelan state funds frozen in the United States and European nations that in 2019 refused to accept the re-election of President Nicolás Maduro, in power since 2013, adopted sanctions and recognized opposition lawmaker Juan Guaidó as president.

Now, in talks between the government and the opposition, with the mediation of governments from this region and Norway, an agreement was reached to unfreeze part of the funds and allocate them to social programs under United Nations supervision.

The United States and European countries are participating in the deal as sanctioning parties and the UN as manager of the released funds and social programs covered by them.

“These are absolutely insufficient resources in the face of the crisis, but well-managed they can have a positive impact given the country’s complex humanitarian emergency,” Piero Trepiccione, coordinator of the network of social centers in Latin America and the Caribbean run by the Catholic Jesuit order Society of Jesus, told IPS.

The HumVenezuela Platform, made up of dozens of civil society organizations, has maintained since 2019 that the social situation in this South American country is a complex humanitarian emergency, based on its records on food, water and sanitation, health, basic education and living conditions.

The sharp deterioration in the living conditions in this country over the last decade has gone hand in hand with the decline of the Venezuelan economy – a collapsed oil industry and several years of hyperinflation – whose most visible international consequence has been the migration of seven million Venezuelans. 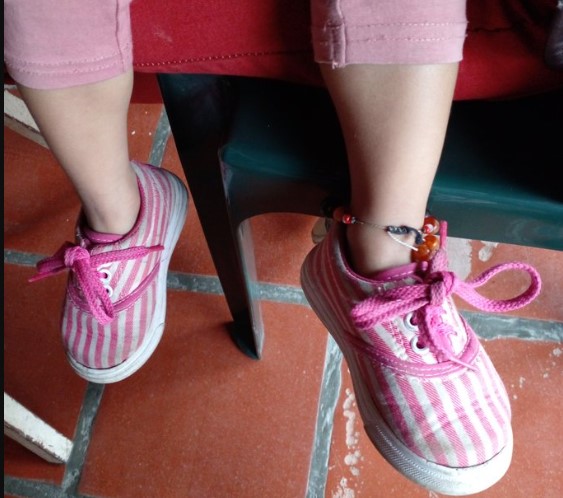 Renowned nutritionist Susana Raffalli published, as an example of a generation of children born and growing up with malnutrition and other problems in Venezuela, a photograph of the legs of a girl who, the day the government-opposition agreement was reached, was eight centimeters shorter than the appropriate size for her age. CREDIT: Susana Rafalli/Twitter

In recent years, U.S. sanctions and the political clash with other governments, as in the case of Colombia, a neighbor with which the borders and the transit of people and goods were closed, have had a major impact.

For example, tragedy struck the low-income family of Michel Saraí, a five-year-old girl with pneumonia who was treated at a small hospital in La Fría, a small town in the southwest near the border with Colombia, which lacked the equipment needed for the necessary tests and treatment.

When her health took a turn for the worse on Nov. 30, her parents decided not to take her to the public hospital in the regional capital, San Cristóbal, because they did not have the dozens of dollars charged there to accept patients, who must bring their own supplies and pay for tests.

A Civil Defense ambulance, with fuel donated by a neighbor – gasoline is scarce in the state of Táchira and others – took the girl and her mother some 25 kilometers to the border bridge in the town of Boca de Grita, so that she could be treated free of charge in the cities of Cúcuta or Puerto Santander, on the Colombian side.

With the border formally closed, the Colombian military agreed to receive the ambulance due to the emergency, but the Venezuelan National Guard refused to allow passage of the vehicle carrying the little girl connected to oxygen.

“We had no money to offer them to see if they would let her get through,” the father, Jonathan Pernía, told local reporters a few days later.

In desperation, the mother and an aunt accepted what seemed like the only alternative: disconnecting her from the oxygen, placing her on a wheelbarrow – “as if she were a sack of potatoes,” Pernía lamented – and running with her through the rain to the Colombian side of the bridge, where another ambulance was waiting for them. But the little girl arrived without vital signs.

At the morgue of the hospital in San Cristobal her parents picked up the body. A week later they were still trying to find the money needed to pay the burial expenses. 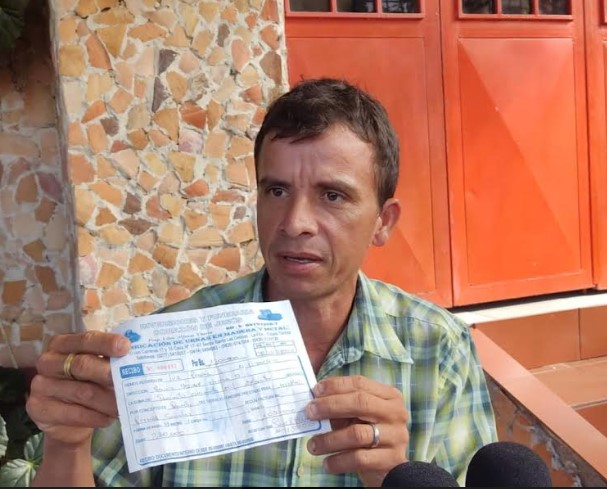 Jonathan Pernía, the impoverished father of a little girl who died when an ambulance was prevented from crossing the border between Venezuela and Colombia to give her emergency treatment, shows journalists the bill for the funeral expenses, which he has not been able to cover either. CREDIT: Courtesy of Bleima Márquez

Figures behind the crisis

In Venezuela, poverty – defined as those who cannot afford the basic food basket – currently affects 81.5 percent of the population (90.9 percent in 2021), according to the Living Conditions Survey of the Andrés Bello Catholic University, which surveyed 2300 households throughout the country. This is the first time in seven years that it has gone down, partly attributable to a rebound in the economy and remittances from migrants.

The survey reported an improvement in formal employment and income this year, with average monthly earnings of 113 dollars for public employees, 142 dollars for the self-employed, and 150 dollars for people working in private sector companies.

As a consequence, food insecurity declined from 88 percent of Venezuelans worried about running out of food in 2021, to 78 percent, while the proportion of people who have gone a whole day without eating dropped to 14 percent, from 34 percent in 2021.

More than 90 percent of poor households have received food assistance from the government -especially carbohydrates- but only one third receive these products monthly.

In health, according to the survey, the use of public services is decreasing (70 percent) and health care is becoming more expensive because, while prices in private clinics are skyrocketing, 13 percent of those who turned to public services had to pay in outpatient clinics and 16 percent in hospitals, and in 65 percent of the cases they had to pay themselves for the medicine that was prescribed for them. 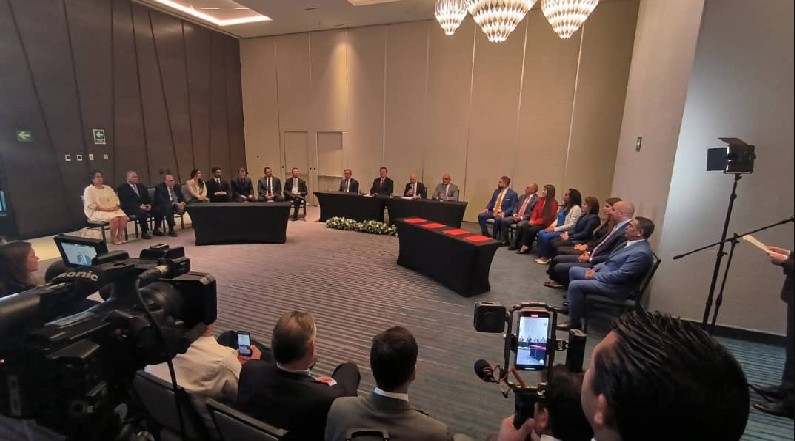 Venezuelan government and opposition negotiators, meeting in Mexico with that country’s Foreign Minister Marcelo Ebrard and Norwegian mediator Dag Nylander, agreed to help address social needs in their country, as a preliminary step to a possible agreement to solving the political crisis. CREDIT: National Assembly of Venezuela

Jorge Rodríguez, president of the legislative National Assembly and the ruling party’s lead negotiator, said that with the funds released after the agreement reached in Mexico, the infrastructure and materials in 2300 schools will be covered, and the vaccines required in accordance with the World Health Organization (WHO) guidelines will be purchased.

Medicine for oncological and HIV patients will be obtained, radiotherapy programs, blood banks and at least 21 hospitals will be revived, while more than one billion dollars will be allocated to the national electricity grid.

The World Food Program (WFP), meanwhile, which now delivers food to families of 100,000 schoolchildren in poor areas in the north of the country, hopes to raise funds to provide meals to more than one million people by the end of 2023.

According to Trepiccione, of the Jesuit network, resources should be directed “to the recovery of the infrastructure of hospitals and schools, which are in terrible condition, because that generates a chain of jobs, services and economic activity along with the obvious improvements in the provision of health care and the quality of education.”

“The same can be said of reactivating the electrical system, hit by blackouts that affect above all the economy and the life of people in the western part of the country,” he added.

Patiño, from the network of soup kitchens, said priorities were “programs for early childhood care, pregnant women, school feeding, as well as care for the elderly and indigenous communities, segments where many are dying too young due to lack of urgent health care.” 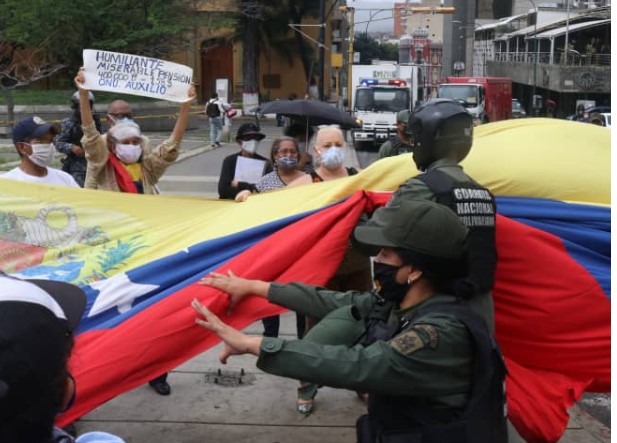 Groups of retirees and pensioners hold constant demonstrations in Caracas and other cities in protest against their tiny pensions, which in Venezuela are equal to the legal minimum wage and this December barely reached the equivalent of nine dollars for the entire month. CREDIT: Courtesy of Efecto Cocuyo

Government pensions, which are equal to the minimum wage, were equivalent to 30 dollars at the beginning of the year, but with the depreciation of the local currency they are equivalent to just nine dollars per month as of this December.

“We must also emphasize that this social agreement is absolutely insufficient in the face of the precarious conditions that exist in our country. These are resources that will be exhausted and the needs will not disappear,” said Patiño.

In his view, “the only thing that can really solve the crisis, the best possible social program, is a decent job, with a sufficient income and with a social security and public health program that takes care of the most needy.”

Funds for the agreement, frozen in banks in industrialized countries, will be released gradually under the supervision of a government-opposition committee and with UN agency management to tender, implement and oversee the programs, in 2023 and 2024.

And over the coming year new meetings will be held and further political agreements are expected, which may lead to an easing or lifting of sanctions and, eventually, to an improvement in the living conditions of Venezuela’s 28 million people.