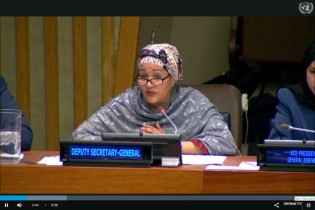 By Amina J. Mohammed
I welcome this opportunity to speak to this urgent and necessary debate of the Human Rights Council. I bring you warm greetings from Secretary-General António Guterres, who shares your abhorrence of racism and is committed to fighting it with every tool we have.

By Amina J. Mohammed
2019 will be a defining year for the 2030 Agenda; and the regional forums will pave the way for our first stocktaking on the SDGs in the General Assembly in September.

By Amina J. Mohammed
After flying into the city of Bol in the Republic of Chad, over the lush fields and receding lakes, we landed to a rapturous welcome from traditional rulers and local women. Their faces reflected a hope and dignity slipping away under the harsh reality of poverty and insecurity.

Development Prospects for Hundreds of Millions Remain in Jeopardy

By Amina J. Mohammed
The global economy is strengthening. A broad-based economic upturn has underpinned progress in many areas. But significant weaknesses and medium-term risks in the world economy continue to challenge our efforts. As a result, the development prospects of hundreds of millions of people remain in jeopardy.

By Amina J. Mohammed
It may seem as if achieving Sustainable Development Goal (SDG) 16, and its target of ending all violence against children, depends mostly on action from governments and civil society. But we also need leadership from the business community to achieve a world where every child is free from violence, abuse, trafficking and torture.

Power of Partnerships in the Fight Against Poverty

By Amina J. Mohammed
The 2030 Agenda is the most ambitious plan governments have ever developed to eradicate extreme poverty and safeguard our planet. While it is a global agenda, it will only be achieved by addressing the multidimensional aspects of poverty and through ensuring ownership on the part of communities, local authorities and individuals.

By Amina J. Mohammed
I am pleased to be with you at this important and timely summit on climate risk and to discuss the opportunities that are there for us to seize through decisive climate action.

By Amina J. Mohammed
This year in the Caribbean and on the American mainland, hurricanes have left millions of people in need of assistance.

By Amina J. Mohammed
Since the turn of the century, much of Africa has achieved impressive economic growth. Sixteen African countries were among the world’s top 30 fastest growing nations. Last year, the 10 fastest growing African economies posted GDP growth rates exceeding 5 per cent.

By Amina J. Mohammed
Two years have passed since the world came together to adopt a truly remarkable framework for common progress: the 2030 Agenda for Sustainable Development. The Agenda is transformative and inspiring its own right. That it was agreed at a time of severe political divisions on so many other issues was especially encouraging. Since then there has been very promising momentum around the world.

By Amina J. Mohammed
During the process of developing the Sustainable Development Goals it was clear to me how relevant and innovative the approach to ending AIDS had been and how important it would continue to be.
ADVERTISEMENT ADVERTISEMENT