Amina Mohammed is the Deputy Secretary-General of the United Nations 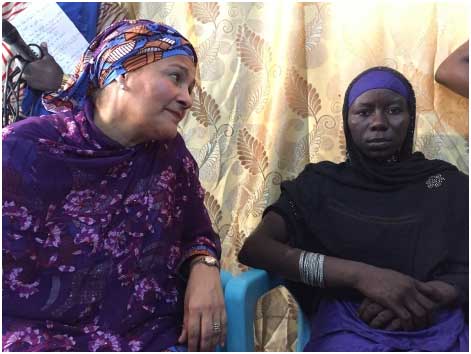 UNITED NATIONS, Feb 1 2019 (IPS) - After flying into the city of Bol in the Republic of Chad, over the lush fields and receding lakes, we landed to a rapturous welcome from traditional rulers and local women. Their faces reflected a hope and dignity slipping away under the harsh reality of poverty and insecurity.

The women, smiling at us as we disembarked, showed the same resilience I have seen in women in countless contexts: an ability to survive, even in the face of multiple forms of violence and insecurity at home, in public or from political conflict.

I visited Chad last summer as part of a three-country mission that included South Sudan and Niger, leading a delegation of senior women from the United Nations and the African Union.

In Niger and Chad, we were joined by Margot Wallström, the deputy prime minister and foreign minister of Sweden, a country that has pioneered the idea of a feminist foreign policy and given prominence to the dynamic between women’s status in society and international peace and security during the country’s two years on the Security Council.

Throughout the mission, I could not shake what we have come to know, that women, and their rights, are the first to suffer in times of crisis. And that this often compounds already high levels of inequality and violence.

I met Halima, a young girl whose life had not been her own. Against her will she was forced to marry. Then her husband, a member of Boko Haram, indoctrinated her with promises of a better afterlife. Halima strapped on a suicide belt, yet never made it to what they were told was a target, as the belts of two other girls went off as they stopped to pray.

Halima lost both her legs. Her future seemed grim, yet she had a measure of hope as she spoke and is working as a paralegal in her community to empower other women.

In Niger, at a centre for fistula survivors, we met girls as young as 12 and 13. Mere children forced into marriage and then raped by their husbands, without any agency or voice over their futures, their bodies, their lives.

Over 75% of girls in Chad and Niger marry before they are 18. They drop out of school and many become pregnant soon after, and because of their young age and complications during pregnancy, these countries have some of the highest maternal mortality rates globally.

Faced with dire poverty and often conflict, families believe they have no choice. They cannot feed their children, but hope maybe a husband can.

As we commemorated 16 days of activism to end violence and harmful practices against women and girls last year, it is important that we acknowledge the multiple forms of violence women and girls face, and the consequences they have for individuals, families, communities, and our shared agendas for development—the 2030 Agenda and the African Union’s Agenda 2063. 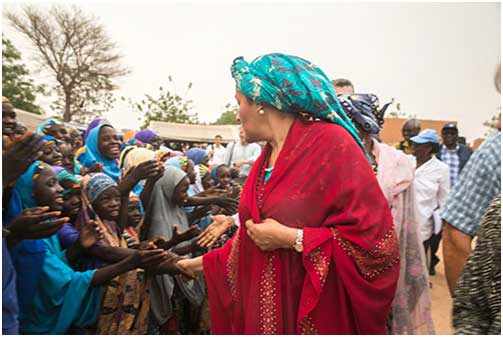 From early forced marriage to femicide, from trafficking to sexual harassment, from sexual violence to harmful traditional practices: violence in all its forms is a global impediment to sustainable development, peace and prosperity.

The United Nations, together with partners, national governments and civil society, is leading efforts to end all forms of violence against women and girls by 2030. And we have existing efforts we can build on.

During our trip, we met traditional leaders, in particular men, who are taking actions in their own communities to stop early marriage. We talked to fisherwomen on Lake Chad who have taken over a traditionally male job in order to provide for their families and who are engaged in sustainable resource management, income generation and empowerment.

And across a number of countries in Africa, we are implementing a new effort with the European Union—the Spotlight Initiative to eliminate violence against women and girls. The approximately $300 million investment in Africa will target all forms of gender-based violence, with a particular focus on child marriages, female genital mutilation and the sexual and reproductive health needs of women and girls.

I finished my travels with a great sense of urgency and hope. The visit reinforced my conviction that we need to implement our global agenda on sustainable development—the 2030 Agenda—with urgency, and gender equality is at the very heart of this.

I am inspired and hopeful because of women like Halima, like the survivors of marriages they never chose, like the girls who were forced into sex and pregnancy long before their bodies were ready. They survived. They are telling their story, and they are determined to have a better future, not only for themselves, but also for their sisters.

In the words of the late Kofi Annan, “Gender equality is more than a goal in itself. It is a precondition for meeting the challenge of reducing poverty, promoting sustainable development and building good governance.”

The link to the original article:
https://www.un.org/africarenewal/magazine/december-2018-march-2019/ending-violence-against-women-and-girls-sahel-crucial-sustainable