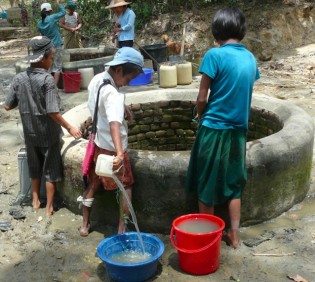 By Johanna Son
Foreign donors are rushing into Myanmar (formerly Burma), whose government has been pushing the right political buttons as part of its democratic reform process. But development planners and local activists caution that  the best approach should still be ‘easy does it’.

By Johanna Son
The past, centred around the democratic records of his popular politician parents, may have sent Benigno Aquino III to the Philippine presidency, but it is now also biting at his heels, less than two months after he assumed office.

By Johanna Son
The charred skeletons of buildings in central Bangkok will be rebuilt after this week's violence, but repairing the gaping fissures in Thai society - deepened further by the army crackdown on anti-government protesters - remains a far harder task.

By Johanna Son
If there were any hopes that Wednesday's surrender by the leaders of Thailand's biggest anti-government protests in decades would instantly ease tensions, these were dashed by the ugly spasms of violence that wracked this capital soon after they turned themselves in.

By Johanna Son
Amid gunfire and street battles here and heated, divided emotions playing out in Thailand's worst political crisis in decades, there has been little room for discussing human rights, restraint and finding a middle ground.

By Johanna Son
Burning tyres and buses with plumes of smoke billowing from them. Sniper shots and grenade attacks. Deaths and injuries. No-go zones in the Thai capital.

By Johanna Son
Very few things – not even the political gridlock that erupted into violence a few days ago – can prevent Thais from celebrating the traditional New Year, marked by drenching one another with water. But this year's festivities were more muted than usual amid the uncertainty around the anti-government protests, which have lasted for more than a month now.

By Johanna Son
Lost in the deluge of accusations that China's dams are the culprit in the Mekong River's unusually low levels is the fact that Beijing has actually become much less tightlipped about thorny issues with its neighbours than in the past.

By Johanna Son
Powerful neighbour. A rising power. Old friend. Big, secretive investor. Big boy of the region. These were some of the terms participants at the just-finished Mekong Media Forum here used, when asked to share the images of China they get from the media.

By Johanna Son
Pushing Muslims' long-held aspirations for genuine self-determination in mainly Catholic Philippines is a complicated struggle "because we are not a priority issue" for the central government.

HEALTH: Why Is Viagra Popular and the Condom Controversial?

By Johanna Son
Why is the popular drug Viagra so praised for its virtues, while the condom is vilified by conservative religious groups among others the world over?

Q&A: ‘It’s Not Difficult to Bring About Social Change’

By Johanna Son
Geeta Rao Gupta, president of the Washington-based International Centre for Research on Women (ICRW), explains to TerraViva's Johanna Son why gender needs to be weaved more tightly into the response against HIV and AIDS.

By Johanna Son
The prescription that thousands of participants effectively issued at a just- ended AIDS conference here was clear: It is time to fight social and political inequities so that the medical gains in curbing HIV and AIDS can work with maximum efficacy.

By Johanna Son
Pharmaceutical firms have developed drugs that have lengthened lives and cut death rates from HIV and AIDS, but their financial clout in no way overrides their social responsibility in fighting the pandemic, a key advocate argued at an Asian conference on AIDS Wednesday.

By Johanna Son and Lynette Lee Corporal
The failure to reach the neediest, often the most stigmatised, people and the global financial crisis, loom as Asia-Pacific's biggest challenges in coping with HIV and AIDS at this point, despite the major headway it has made in expanding the number of people with access to treatment.

By Johanna Son
In 1949, Filipino doctor Abelardo Aguilar was testing micro-organisms he had isolated from soil samples in his back garden when he chanced upon bacteria that would later lead to the development of the antibiotic erythromycin.
ADVERTISEMENT ADVERTISEMENT