BALI, Aug 12 2009 (IPS) - Pharmaceutical firms have developed drugs that have lengthened lives and cut death rates from HIV and AIDS, but their financial clout in no way overrides their social responsibility in fighting the pandemic, a key advocate argued at an Asian conference on AIDS Wednesday. 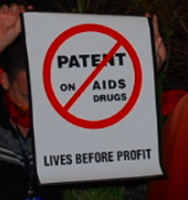 At the 9th International Conference on AIDS in Asia and the Pacific (ICAAP), Javed Jabbar, a former senator and minister from Pakistan, called on governments and communities to remind drug firms of the fundamental difference between owning patents on goods – such as designer items or mobile phones – and life-saving HIV drugs.

“These are medicines that make for life and death,” argued Jabbar, also global vice president for the International Union for the Conservation of Nature. By applying the patent system to the drug product and the process, “we create inherently unjust monopolies and block knowledge transfer” that could save so many lives around the world.

Toward the end of his remarks, activists pushing for the removal of drug patents trooped in front of the hall and unfurled banners that said ‘no patents on AIDS drugs.’ Lambasting several drug companies for refusing to let generic versions of HIV drugs be made, they chanted, ‘Shame on you!’

Jabbar expressed support for a proposal by economist Joseph Stiglitz to recognise people’s property rights. He suggests setting up a fund to pay fees to scientists who come up with cures for key diseases – after which the drugs would go into the public domain instead of being ‘owned’ by pharmaceutical companies.

In an interview, Jabbar said that the idea of people’s property rights would include giving drug companies payments to continue producing needed medication.

Echoing criticism by many activists here at ICAAP, he cited studies saying that only 15 percent of the cost of drugs actually goes to their development, the rest goes to marketing. Quoting from academic studies, he said that patent protection pushes up drug prices by an average of 400 percent and often exceeds 1,000 percent.

“They can make money but they don’t have to make 400 percent profit,” said Jabbar. “It’s greed, it’s shameful.”

At the same time, Jabbar says there are signs that the “concept of the people’s will” is gradually making some headway in putting some pressure on drug firms.

In July, the drug firm GlaxoSmithKline (GSK) granted a free voluntary licensing agreement to a South African company to produce abacavir, a second-line anti-retroviral drug, on a generic basis. Earlier this year, it put several of its patents on tropical diseases into a free pool – but excluded drugs for HIV and AIDS.

Then, there are the examples such as Brazil, India and Thailand taking key roles in producing more affordable treatment for HIV.

Ironically, Jabbar observed, it is the “great gains” in science and medical health – including HIV/AIDS in the past – that have given drug companies such strong clout in virtually shaping public health policies for the world.

While World Trade Organisation (WTO) rules allow room for breaking patents and resorting to compulsory licensing for public health needs, including HIV and AIDS, many health advocates say that these are far from enough today.

The world trade regime has also put in place a system where corporate intellectual property rights – especially those of pharmaceutical firms – are “strongly enforced” at the expense of the public good, Jabbar maintained.

Those breaking patents or making generic formulations of drugs attract strong action from companies – much more than when copies are made of movies or books – even if the public health interest in the case of medicines is crystal clear, Jabbar added.

While the idea of people’s property rights is not something drug firms will embrace, “it doesn’t mean that we shouldn’t campaign for it.”

To drive home the seriousness of the pandemic nearly three decades after the first HIV cases were reported and despite huge medical leaps made in the last decade, Jabbar used the analogy of a ‘sexy’ development term these days: climate change.

“What climate change means for our planet’s survival, HIV/AIDS means for human health,” he said.