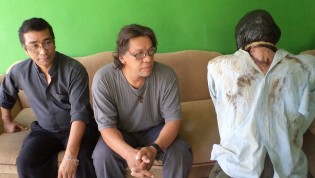 By Micah Luxen
After an unsuccessful two-year attempt to end the civil war in Syria, UN peace envoy Lakhdar Brahimi has decided to step down by the end of May.

By Micah Luxen
Every person in the world now has the opportunity to speak up at the United Nations, and already 1.8 million people have submitted their messages.

Samantha Power Talks Transition from Journalist to ‘Ambassador to the Moon’

By Micah Luxen
Ambassador Samantha Power, U.S. permanent representative to the United Nations, spoke about the challenges of the job to a crowded theatre Saturday, during the ‘Women in the World’ summit in New York City.

By Micah Luxen
Russian military forces pushed into Ukraine, because Russian President Vladimir Putin believes his own conspiracy theories. This was the hypothesis of experts from a variety of fields, who met at the Columbia University School of International and Public Affairs (SIPA) in New York Monday.

By Micah Luxen
“We cannot give up on the people of Somalia, even as the world is overwhelmed by crises”, was the UN’s message for the international community.

By Micah Luxen
During his last visit to the United Nations as head of the department providing relief to Palestinian refugees, Filippo Grandi spoke about the immediate challenges facing his organisation.
ADVERTISEMENT ADVERTISEMENT