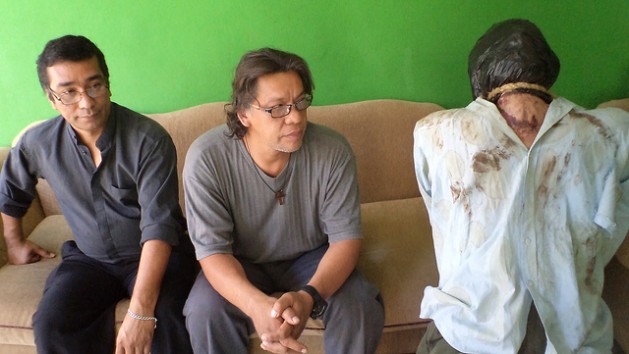 Salvadorans Carlos Santos (left) and Fabricio Santín alongside a papier-mâché sculpture of a torture victim with a plastic bag – “la capucha” - on his head. Torture and killings by state death squads were widespread during the country's 1980-1992 civil war. Credit: Edgardo Ayala/IPS

UNITED NATIONS, May 13 2014 (IPS) - Alfreda Disbarro is awaiting trial in her native Philippines, charged with the sale and possession of illegal drugs. According to her sworn affidavit, while in police custody, she was in so much pain that she couldn’t eat, had difficulty breathing and kept vomiting.

According to her same affidavit and testimony, Disbarro was arrested violently in October 2013 and taken to police headquarters where she was forced to admit her guilt via methods of torture – enduring punches to the stomach and face, blows by a club and wooden stick, fingers to the eyes, and being forced to eat a mop.

“It’s virtually everywhere, in one way or another.” -- Michael Bochenek

Disbarro’s sister alerted the Commission on Human Rights. The resulting examination by a doctor reported marks of injury over her body. Disbarro remains in custody.

Amnesty International is marking the 30th anniversary of the U.N.’s Convention Against Torture with the grim news that stories like Disbarro’s and the practice of torture is still common in many countries.

Torture, according to Amnesty, is physical or mental pain or suffering that is inflicted intentionally for a particular purpose, such as trying to obtain information or to punish a person for who he or she is or what he or she is alleged to have done.

The London-based human rights watchdog started a new campaign as a result, called Torture in 2014: 30 Years of Broken Promises.

Of the 141 countries Amnesty works with, every one reported torture or other ill-treatment in the past five years. In addition, a survey of 21,000 people from 21 countries reveals fear of torture is present in all of these, and found that the majority of people believe governments should make clear laws against torture.

“It’s virtually everywhere, in one way or another,” Michael Bochenek, Amnesty International’s senior director for law and policy, told IPS.

“There may be differences in degree – there may differences in whether a particular state has a systematic or pervasive use of torture, versus something in another country that’s more episodic. But it’s not just repressive states that use torture.”

Bochenek says the primary responsibility to end torture falls on governments, but that citizens can demand increased accountability on the part of their own government.

Torture prevention and response mechanisms include allowing lawyers into detention centres to meet with their clients and requiring judges and other court officials to open investigations when they see something that suggests torture.

In one such response, the government of Angola suspended 16 prison guards and firemen for a brutal attack on prison inmates, which was “a rare reaction to public anger from one of Africa’s most authoritarian governments,” Reuters reported in September 2013.

In a video of the incident, guards allegedly beat prisoners with sticks and laughed as the inmates lay on the floor bleeding and crying.

“We express our indignation at the acts performed by these officers,” the Interior Ministry said in a statement.

And while human rights violations are highly publicised under repressive governments in countries such as North Korea and Syria, the actions of power players such as the United States may influence worldwide norms, says Bochenek.

“That’s why the U.S. reliance on torture was so damaging during the years immediately after the attacks of Sep. 11,” he told IPS.

“Not only was this an extraordinary departure from previous practice in terms of defending or upholding in principle the prohibition on torture, but it really undermined the credibility that the United States had when it was trying to promote human rights in general, whether on torture or anything else.”

Amnesty reports that since 1984, 155 states have ratified the U.N. Convention Against Torture, at least 79 of which are still torturing. A further 40 U.N. states haven’t adopted the convention, although the global legal ban on torture binds them too.

“Everyone has the right to be free from torture,” said Bochenek.