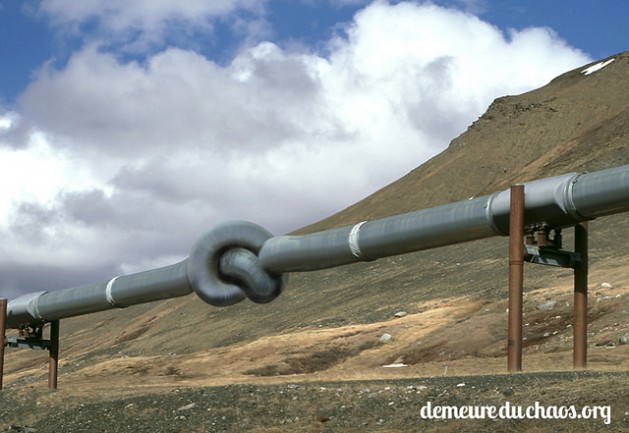 A disruption of Ukraine's gas supplies would affect many other parts of Europe as well. Credit: Thierry Ehrmann/cc by 2.0

UNITED NATIONS, May 8 2014 (IPS) - It’s springtime in Ukraine, but conflict and economic threats are bringing an early chill. During these months when the country normally stores up energy reserves for winter, access to natural gas may be Russia’s best weapon to influence Ukraine’s new government.

“Ukraine is heavily dependent on natural gas,” said Edward Chow, a senior fellow of the Energy and National Security Programme at the Centre for Strategic and International Studies (CSIS).

"If you can’t get sufficient energy in, Ukraine collapses. Political scientists for years have been talking about failed states. You have one." -- Kent Moors

Under a system designed in the Soviet-era, Ukraine stores up natural gas reserves from Russia and then distributes them to Europe.

“So even though Ukraine’s natural gas needs are not very high in the summertime, if they’re not building stock in the summertime, then they will cause a winter supply crisis,” Chow told IPS. “We don’t have to wait until December to figure that out.”

On Thursday, a spokesperson for Gazprom, the Russian state-controlled energy company, confirmed to IPS, “As of today the Ukraine has not paid its debt for the Russian gas. The April bill is overdue, no payment has been received. The outstanding gas debt of the Ukraine rose to 3.508 billion dollars.”

The company has said that unless the Ukrainian gas company Naftogaz pays its energy debt, Russia will require prepayment before distribution.

“People were pretty much freezing in 2009 in parts of Europe which are heavily dependent on Russia for gas imports,” said Chow, who predicts this crisis could last much longer.

“With an unwanted government in Ukraine, prices were high. With a pro-Russian government, significant discounts apply,” Svejnar told IPS.

In December 2013, Russian President Vladimir Putin offered to buy Ukrainian bonds from former president Viktor Yanukovych, which provided the funds to pay for Russian gas. When an interim government took over from Yanukovych, Putin withdrew support, cancelled the bond purchases and raised the price of gas by 80 percent.

Naftogaz hasn’t made payments demanded by Gazprom since January.

The rest of Europe, which depends on Russia for a third of its gas supply, would be affected by a supply disruption to Ukraine. The impact falls disproportionately on countries in Southeast Europe, which do not have alternative supplies. A limited supply of natural gas arrives to Western Europe through pipelines that bypass Ukraine, such as the newly constructed Nord Stream through the Baltic Sea.

Even so, experts say that Western Europe could not send a reverse-flow energy supply east. Russia’s Gazprom prohibits the resale or re-transport of natural gas from Russia.

“Gazprom has a number of ongoing agreements with the major utilities in Western Europe,” said Kent Moors, executive chair of the Global Energy Symposium, “so there are some vested interests in Western Europe that really wouldn’t like to see sanctions that would impact that ongoing trade.”

According to CSIS, if the European utilities not tied up in Russian contracts were to move natural gas from Europe in reverse mode to Ukraine, it would at best satisfy less than a third of what Ukraine needs this coming winter.

“The question is not one of leverage, it’s one of political will, and who’s willing to use it and who’s not,” said Chow, who has more than 30 years of oil industry experience, including work in Europe and the former Soviet Union.

Kent believes the countries that depend almost entirely on Russian oil, such as the Baltic states and Poland, would be more likely to take a hard line against Russia “because of the historical experience.”

Those countries that are less vulnerable, as a result of increased energy diversity, such as France, Italy and Germany, are more inclined to be soft on Russia. “So in my mind, it’s more a matter of political will than economic leverage,” he told IPS.

The CSIS’s Chow said that while Europe depends on Russia for 30 percent of its gas supply, Russia depends on Europe for 80 percent of its gas export market. “So who’s more dependent on whom?” As a result, Chow says that Russia won’t want to cut off supplies, and its own profits, through Ukraine for the long term.

Kent, who has a Ph.D. in political science, says the goal must be to get Ukraine through the next winter. “Because if you can’t get sufficient energy in, Ukraine collapses. Political scientists for years have been talking about failed states. You have one. It’s not going to be able to function. And there’s probably some elements in Russia who are simply waiting for this to happen. And then they can say, look, it’s not our fault that Kiev collapsed under its own inability to function.”

The ambassadors of Ukraine and Russia declined to comment for this article.