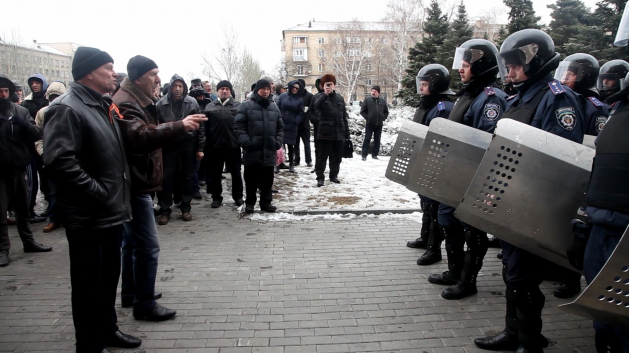 “We stay here and save this monument and this place, because people in the West come [to] this place with war,” Korotenko told IPS. “People from Donetsk think about peace with Russian Federation and don’t want war in our town.”

“People don’t accept the new government that is now in Kiev."

Korotenko describes himself as a protector of the square, where thousands of pro-Russian protestors have held daily demonstrations in support of a referendum to join Russia and in opposition to the government formed in Ukraine after former president Viktor Yanukovych absconded to Russia.

“People don’t accept the new government that is now in Kiev,” said Alex Yoktov, a Donetsk native who attends the rallies. “It’s like one oligarch switched to another oligarch in the government.”

Yoktov said the Euromaidan movement in the capital Kiev used violence and “extremists to get to power.” The Euromaidan protests in Kiev were held over the past several months to demand closer integration with the EU.

“I fear that Nazis like Svoboda [a Ukrainian political party] and stuff, and such parties will be the main power of the country,” he told IPS. “So they can do whatever they want. It will be almost the same situation … in Germany when fascists come to power.”

Home to about two million people, Donetsk is a major economic, industrial and scientific hub in the east located about 80 kilometres from Russia.

In early March, the city council of Donetsk called for a referendum on the future of the region to “protect the citizens from possible violent actions on the behalf of radicalised nationalistic forces.”

The council noted that it considers Russia a strategic partner.

Yoktov said he feels closer to Russia than Europe. “It’s like native relations. We are the same people as in Russia. They’re our brothers.” Many people in the region, including Yoktov, have relatives in Russia.

Nadiia Zima, a 24-year-old teacher in Donetsk, disputes Yoktov’s claim. She has protested on the streets of Donetsk in support of Euromaidan, and wasn’t paid.

Zima is convinced there will be a referendum in Donetsk, since Russian President Vladimir Putin has said the eastern part of Ukraine is historically Russian. “Any referendum is to my mind just an imperial desire of the Russian president,” Zima told IPS.

Zima worries about her country’s future. “I fear that war can start,” she told IPS. “The thing that I am afraid of more is that our Donetsk region is going to be the next after Crimea.”

Vitalik, standing guard at a Ukrainian police checkpoint about 20 kilometers outside Donetsk with about eight Ukrainians fears war, too. He didn’t want to give his last name because he fears being targeted by Ukrainian security forces.

The self-organised, unarmed volunteers huddle together near an orange and black St George flag that symbolises Russian military valour.

“We’re stopping buses that are moving around this country to check that there are no guns, weapons and stuff like that and some strange people,” Vitalik told IPS. “We are protecting Donetsk.”

The 30-year-old construction worker said he’s especially concerned about the new 60,000-strong Ukrainian National Guard, which would include members of the Right Sector paramilitary group who fought in the Euromaidan protests in Kiev.

More than 700 kilometres away in Kiev, Vitalik Coida is also a volunteer guard, protecting the entrance of the Euromaidan protest area in central Kiev. He is a member of the Svoboda party, considered by many pro-Russians as one of the main “extremist” groups.

Cojda watches out for “provocateurs” who bring weapons and bombs. “But we patrol, we stop them, anyone who looks suspicious. All of these are people sent by Putin because you can hear their Russian accent,” he told IPS.

Cojda arrived at Euromaidan on Nov. 26, shortly after the protests began. He said his 19-year-old friend died in his arms after being shot during a battle with the Berkut, the elite riot police of Ukraine. “It was very difficult to look into his mother’s eyes because it was me that invited him to come here…to protect the country from bandits.”

The Svoboda party, he said, is “really fighting for truth and for freedom.” He said he would remain at Euromaidan until Russian troops leave Ukraine.

“The people do not know the truth,” Beznis told IPS. “There are no extremists from my country from Maidan.” He said Ukraine’s biggest problem is now Russia.

Beznis came from Donetsk to Kiev this week to get weapons training.

“We like Russia, too, but we don’t want any war here,” Beznis said. “As we don’t want to be involved, we need to support our safety and democracy in Ukraine. We must protect our democracy and we must train for our power.”

His biggest fear is civil war. “I hope that it will not happen. I really hope. I try not to think about it,” he said.

Vitalik, the pro-Russian checkpoint guard just outside of Donetsk, says much the same. “Nobody wants a war, everyone wants to stay in peace.”