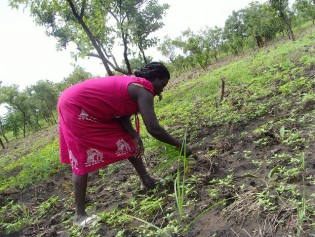 By Moyiga Nduru
Facing an unprecedented economic crisis, South Sudan -- the newest nation of the world -- has urged its 12 million inhabitants to turn to agriculture instead of depending on declining oil revenues.

By Moyiga Nduru
A single phone call from an irate security official is enough to shutdown a newspaper in Sudan. Security agents sometimes employ unorthodox methods: they storm the premises of a newspaper or a printing press and confiscate print runs in full view of employees. No reasons are provided. And there is no legal recourse.

By Moyiga Nduru
While there is a growing desire for change in Sudan - particularly among the younger urban population in the north - there is no atmosphere of heated campaigning or supporters mobbing candidates in the south, as campaigning for general elections concludes.

By Moyiga Nduru
Sudan is at a crossroads. Its future looks grim. "Only a miracle can save it from disintegrating. The signs are already on the wall," says Khamis Lako, a petty trader in Juba, the capital of South Sudan.

By Moyiga Nduru
‘‘Italians used to think of Africa in terms of safari and animals, especially the Big Five. Now they are realising that there’s business potential in South Africa,’’ says Giovanna Roma, secretary general of the Italian South African Chamber of Commerce and Industry of Northern, Eastern and Western Cape.

By Moyiga Nduru
Representatives of Sudan's government and rebel groups will meet in the northern Tanzanian town of Arusha next month in a bid to hammer out a deal to end four years of conflict in Darfur.

By Moyiga Nduru
Two years ago, several West African states found themselves in the grip of severe food shortages - with some three million people affected in Niger alone. Children died, aid officials wrung their hands, people marched in Niger's capital, Niamey, to demand food...But were lessons learned - really learned - to ensure that the crisis does not recur?

By Moyiga Nduru
What is a common factor in ensuring that women do not marry too young, do not have more children than they can cope with, do not die giving birth - and contract HIV in smaller numbers? Men.

POLITICS-ZIMBABWE: The Cycle of Violence Continues

By Moyiga Nduru
Pius Ncube, the outspoken Catholic archbishop of Bulawayo in southern Zimbabwe, has urged President Robert Mugabe to step down - this as the country faces deepening political and economic woes.

By Moyiga Nduru
The final leg of the 2007 African Union (AU) summit kicked off in the Ghanaian capital of Accra Sunday, with a three-day gathering of the AU Assembly - comprising heads of state and government.

By Moyiga Nduru
The late activist and economist Jose Negrao, who posthumously won the Southern Africa Trust’s Drivers of Change Award last year, is featuring again at this year’s awards. His brainchild, Mozambique’s Group of 20 anti-poverty civil society organisations, has been nominated for the 2007 award.

SOUTH AFRICA: "You Cannot Keep People Away From Settling in Cities"

By Moyiga Nduru
Population issues are in the spotlight at present with the recent release of the United Nations Population Fund's annual report - and World Population Day, to be commemorated Jul. 11.

By Moyiga Nduru
A section of the world heritage site the Greater St Lucia Wetland Park, Africa's largest estuary, has been returned to its rightful owners, who have in turn undertaken to manage the land in accordance with the country's environmental laws.

RIGHTS-SOUTH AFRICA: Back to the Land of Our Parents

By Moyiga Nduru
‘‘Today we are here to say never again shall our people lose their land rights because they are black,'' said Lulama Xingwana, South Africa's minister of agriculture and land affairs.

By Moyiga Nduru
In the final hours before this week's Group of Eight (G8) summit gets underway in Germany, activists have underscored the need for progress with both climate change and poverty alleviation - key items on the meeting's agenda - for there to be real improvement in Africa's living conditions.

DEVELOPMENT-SOUTHERN AFRICA: Leaving the Country to Earn a Living

By Moyiga Nduru
‘‘We have lost a young woman in South Africa. We have raised R3,500 (500 US dollars) but we need R5,000 (714 dollars). We want to transport the body home to her relatives in Zimbabwe. But it is difficult,'' Joyce Dube, director of the Southern African Women's Institute for Migration Affairs (SAWIMA), told a gathering.

By Moyiga Nduru
About one million people in need of anti-retroviral (ARV) treatment are yet to receive it in four southern African states, according to Medicins Sans Frontieres (MSF), a global nongovernmental organisation specialising in medical services.

SOUTH AFRICA: Cape Floral Kingdom as Vulnerable as It Is Biodiverse

By Moyiga Nduru
A shortage of health care workers is paralysing the health system in Lesotho, Malawi, Mozambique and South Africa, and threatens the lives of millions, particularly in rural areas, warns Medecins Sans Frontieres, a global nongovernmental organisation specialising in medical services.

ENVIRONMENT-AFRICA: Long Knives Out Over Elephants

By Moyiga Nduru
Environmentalists are readying themselves for another heated round of debate and horse-trading in the continuing international tussle over the issue of ivory sales.
Next Page »
ADVERTISEMENT ADVERTISEMENT