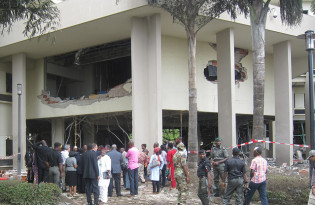 By Toye Olori
Residents in the three Nigerian states where a state of emergency has been declared are living in fear as food prices soar and government soldiers conduct door to door campaigns to root out terrorists.

By Toye Olori
The decision by The Hague over Shell’s liability for polluting in the Niger Delta shows that justice is possible – but it is extremely hard to achieve if you are taking on a massive multinational, says Amnesty International’s Africa programme director Audrey Gaughran.

By Toye Olori
The high rate of divorce in Kano state, northern Nigeria has become a worrisome phenomenon. Six months ago, an organisation of widows and divorcees tried to stage a massive march through the city of Kano to draw attention to their situation.

By Toye Olori
The sectarian violence which broke out in several parts of northern Nigeria at the end of July has more to do with popular anger and frustration with prevailing economic conditions than religion, say religious experts and Muslim groups. Concerns have also been raised about the reaction of security forces.

By Toye Olori
Dressed in a simple buba (Nigerian wear) and black trousers on this particular morning, Lawal Olukole receives patients in a six by six foot consulting room made of plywood.

By Toye Olori
Amnesty International says that hundreds of those awaiting execution on Nigeria's death row did not have fair trials and may therefore be innocent.

By Toye Olori
Hopes of a reprieve for hundreds of death row inmates in Nigeria were dashed when MPs threw out a bill which would have commuted all death sentences to life imprisonment and down-graded robbery with violence to a non-capital crime.

By Toye Olori
Three Nigerian MPs have stepped in to end years of political inertia over ending the death penalty in Africa's most populous nation, forcing a parliamentary debate and vote on their Private Members’ Bill for abolition.

By Toye Olori
It is a paradox of note: the fact that while Nigerians live in the world's sixth-largest oil producer, most of them still rely on wood for their fuel.

By Toye Olori
The return of democracy to Nigeria in 1999 after years of military dictatorship has not brought an end to extra-judicial killings; rather, the number may have doubled in what is now often a daily occurrence, says the Civil Liberties Organisation - a human rights group based in the financial hub of Lagos.

By Toye Olori
"You see the fear in their eyes. When someone has been on death row for 10 to 20 years and a strange face comes closer, he thinks the hangman is probably coming to take him to the gallows."

By Toye Olori
Some 600 people are now crammed into Nigeria’s disease-infested death rows and the number is certain to rise with a justice system that critics say has been resisting reform since the end of military rule in 1999.

By Toye Olori
Nothing seems to stir up emotions more than census in Nigeria. That's why some Nigerians are still contesting the results of the 2006 census, announced by President Olusegun Obasanjo late last month.

By Toye Olori
China is extending a hand into the Nigerian transport sector in a deal to help the Nigerian government put back on track the country's foundering railway system.

By Toye Olori
It's certainly a logical suggestion: in an effort to make cocoa-producing countries in Africa less dependent on consumers abroad, why not increase domestic consumption of cocoa products?

By Toye Olori
Bishop Kodji, a small fishing and canoe carving island in the Atlantic Ocean off Nigeria's sprawling commercial hub of Lagos, has become the first village to be electrified under the Lagos State government's pilot solar energy project..

By Toye Olori
It all started some 30 years ago as development began to creep into this small community following Nigeria's oil boom of the 1970s.

By Toye Olori
PROSAB or Promoting Sustainable Agriculture in Borno State is a micro-credit project with a difference in northern Nigeria.

CHALLENGES 2005-2006: An Assured Power Supply a Distant Dream in Nigeria

By Toye Olori
At the end of a year that was meant to solve Nigeria's chronic electricity problems, an assured power supply is still a distant dream in this oil-rich nation.

POLITICS-NIGERIA: A Season of Ethnic Discontent

By Toye Olori
The release and re-arrest of members of a Yoruba organisation this week have marked the latest chapter in Nigeria's bid to contain ethnic unrest in various parts of the country.

By Toye Olori
A government programme to provide primary school children with free lunches has been launched in Nigeria, to encourage parents to educate their children - and to ensure that pupils learn effectively.
Next Page »
ADVERTISEMENT ADVERTISEMENT