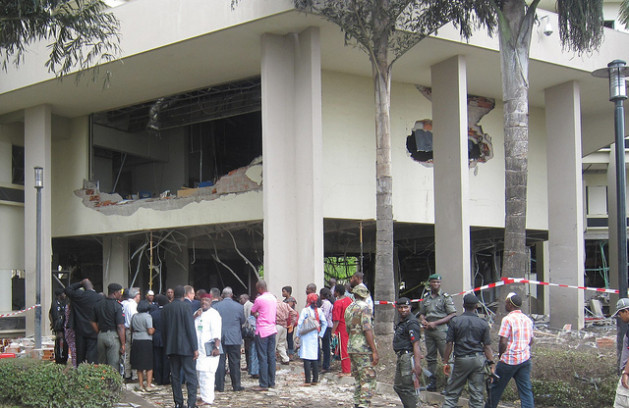 LAGOS, Nigeria, Jun 7 2013 (IPS) - Residents in the three Nigerian states where a state of emergency has been declared are living in fear as food prices soar and government soldiers conduct door to door campaigns to root out terrorists.

The Joint Military Task Force has been deployed to the three northern states of Borno, Yobe and Adamawa, where on May 14 President Goodluck Jonathan declared a state of emergency.

Jonathan imposed the state of emergency following security reports that terrorist groups, including the Islamist extremist organisation Boko Haram, had over-run some towns in the north-eastern part of the country, removing Nigerian flags and hoisting their own.

But Amnesty International’s (AI) deputy Africa programme director, Lucy Freeman, told IPS that in addition to living in fear of attack by Boko Haram, people in the affected states are facing human rights violations at the hands of the very state security forces whose mandate is to protect them.

“In recent weeks, residents of Borno state in northern Nigeria have told Amnesty International that mass arrests in Maiduguri (a town in Borno state) have increased. Many people have fled their homes. Some areas of the city are gradually becoming ‘ghost towns.’

“Public schools have closed as parents are too scared to send their children to school,” Freeman said.

Boko Haram, which means Western Education is a Sin, is fighting for an independent state and the imposition of Sharia Law in northern Nigeria. According to a 2012 report by Human Rights Watch, the group has killed almost 3,000 people since 2009. The most recent attacks were on May 7, in the northern Nigerian town of Bama, which killed 55 people.

Freeman noted that findings by AI showed that many of those detained had been denied access to the outside world, including lawyers, families, and courts, and were held outside the protection of the law.

“Detainees suspected or accused of being members of Boko Haram are usually not informed of why they have been arrested, their families are not told where they are being held, and they are generally denied access to a lawyer.

“Of those detainees accused of being members of Boko Haram who have been charged with a criminal offence and brought to court since 2009, very few have had their cases heard. Most are remanded in prison where they remain awaiting trial,” she said.

Ali Sani fled his home in Mubi, one of the major towns in Adamawa State, and now lives in Kano, northern Nigeria.

He keeps up to date on what is happening in his hometown and told IPS that the dusk to dawn curfew imposed by the military there was seriously affecting commercial activities in the town.

“A friend who came from Mubi at the weekend told me that there is no fighting in Mubi, but the curfew imposed on the state is affecting business and free movement.

“You cannot communicate because phones have been cut. Farmers cannot farm because of fear, and food prices have gone up,” he said.

While declaring the state of emergency, Jonathan explained that it had become necessary because of a recent spate of terrorist activities and protracted security challenges.

An editor from the north central state of Kaduna, who wanted to be known only as Rahman, told IPS that communication in Borno, Yobe and Adamawa had been cut off since the state of emergency was declared.

“I think it is a deliberate thing to cut communications between members of Boko Haram and also to stop them from using mobile phones to detonate bombs.

“But this has affected innocent subscribers who cannot reach their relations or be reached,” he told IPS.

But Fredrick Fasehun, founder of the Oodua Peoples’ Congress (OPC) in southwestern Nigeria, said that the military operations in the area were normal procedure under a state of emergency. The OPC is a militant Yoruba nationalist organisation in Nigeria.

“When you declare a state of emergency in a region, it is the duty of the armed forces to maintain law and order and it is known that soldiers maintain law and order through force,” Fasenun told IPS in Lagos. As the founder of the OPC, Fasehun has been detained on several occasions by the military for allegedly operating an illegal militant group.

He, however, called for the proper interrogation of those arrested and said those found not to be involved in the insurgency should be freed. He said those implicated in the fighting should be taken before a court of competent jurisdiction.

While also supporting the state of emergency in the three states, rights activist Femi Falana told journalists in Lagos that in the face of incessant terrorist attacks, kidnapping, armed robbery and other violent crimes in Nigeria, the government should stop paying lip service to the security of life and property in the country.

He commended Jonathan for acting within the ambit of the constitution by not dissolving the democratic structures in the affected states.