LAGOS, Sep 2 2011 (IPS) - Security experts say that unless something is done to regulate the high level of illicit transactions and proliferation of commercial explosives in Nigeria, scenes like the United Nations suicide bombing will become more frequent. 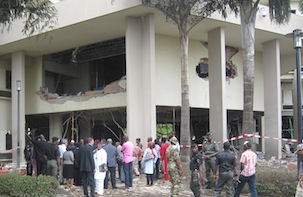 The bombing of the U.N. building in Nigeria's capital, Abuja, claimed 23 lives and wounded 81 people on Aug. 26. Credit: Chris Ewokor/IPS

Ifeanyi Okechukwu, from the West African Network for Peace Building, which works with international organisations to prevent armed conflict, said the bombing was an attack just waiting to happen.

“We have a total gap in our security system and some people have capitalised on this to continuously cause mayhem. We are not surprised by this bombing,” Okechukwu said. He added that unless the country found proactive ways to address its security problem, the violence would continue.

The bombing of the U.N. building in Nigeria’s capital, Abuja, claimed 23 lives and wounded 81 people on Aug. 26.

The Islamic militant group, Boko Haram, claimed responsibility for the attack. The extremist group said the bombing was in retaliation for the support the United States and the U.N. have given the Nigerian government in persecuting Muslims in the country.

Nigeria, with a population of 150 million people, is split between the Christian south and Muslim north. President Goodluck Jonathan is also Christian.

A spokesman for the group, Abu Kakah, told journalists in a telephonic interview that the attacks would continue.

Boko Haram, which is opposed to western education and a western way of life, wants an Islamic state in Nigeria.

In recent months the group has launched a series of bomb attacks on police stations, military barracks, churches and other public places. The group even bombed Nigeria’s police headquarters in Abuja in June.

Police say the bombs used in the attacks were assembled from commercial explosives used for quarrying, mining seismic exploration and road construction.

“Based on the way they are being proliferated, our security operatives have to be observant,” Okechukwu said.

He added that the country needed regulations that made it mandatory for anyone purchasing explosives, or shops selling them, to report the sale and purchase of these items to police.

However, Minister of Mines and Steel Development Musa Sada said that the products are regulated as dealers and importers of explosives are required to renew their licences every three years.

But Okechukwu said this needed to be enforced.

“The way you enforce the regulation to meet the security challenge is very important,” he added.

Deputy Secretary-General of the U.N. Asha-Rose Migiro told journalists that they were investigating how to strengthen their security.

“We are currently doing a thorough assessment of what happened, how it happened, and how we should strengthen whatever measure we have as a security option,” Migiro said after visiting the scene on Sunday.

“The problem is that essentially we need to spend more money on security, but every dollar that we spend on security is a dollar that we are not spending on medical care, or development or humanitarian affairs,” Gregory Starr, the U.N.’s Under-Secretary-General for Safety and Security, told the press in Abuja.

“So there is a very fine line that we have got to hit here,” Starr said.

Boko Haram warned Nigerians in June that it would wage war to make the country ungovernable.

“Very soon, we will wage jihad…We want to make it known that our jihadists have arrived in Nigeria from Somalia where they received real training on warfare from our brethren who made that country ungovernable,” the group said in a statement issued shortly after the June attack on the police headquarters. The group was referring to the Somali Islamic extremist group, Al-Shabaab, which controls large parts of Somalia.

“This time around, our attacks will be fiercer and (more widespread) than they have been.”

Okechukwu said that by being unable to prevent such attacks, the police and military have failed to live up to their security mandate.

“We should not wait for people to die. We should be able to put a mechanism in place where we will be able to effectively monitor security threats so people do not lose their lives,” he told IPS.

In June government set up a military task force, which was deployed to Boko Haram’s stronghold in Maiduguri, capital of the northeastern state of Borno.

But Okechukwu said that the deployment would not prevent further attacks as the country’s police do not have a sufficiently effective intelligence network.

“It is not just about carrying guns, because the police don’t know where to track the bombers,” he said, adding that police needed reliable intelligence.

But Nigeria’s State Security Service, SSS, says this is not true. In a statement issued on behalf of other security agencies in Nigeria, the SSS said they had an intelligence report on Aug. 18, that “some Boko Haram elements were on a mission to attack unspecified targets in Abuja.” The statement also said that on Aug. 21 “a joint operation by all security services led to the arrest of two notorious leaders of the Boko Haram sect.”

The SSS said that investigations have revealed that Mamman Nur, a Boko Haram member with Al-Qaeda links, masterminded the U.N. attack.

Just 10 days before the U.N. bombing General Carter Ham, Commander of the U.S. Africa Command, said during a visit to Nigeria that there are indications that Boko Haram is trying to form an alliance with Al-Qaeda in the Islamic Maghreb (an armed Islamist resistance movement in Algeria), and with the Somali-based Al-Shabaab, which also has links to Al-Qaeda.

He said the objective of the three groups combining was to launch joint attacks in Nigeria. “I think it would be the most dangerous thing to happen, not only to Africans, but to us as well,” he said.