LAGOS, Aug 20 2009 (IPS) - The high rate of divorce in Kano state, northern Nigeria has become a worrisome phenomenon. Six months ago, an organisation of widows and divorcees tried to stage a massive march through the city of Kano to draw attention to their situation. 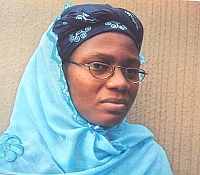 Fijabi: 'Divorce is not favourable to women. Education can help women to assert their rights, but the law has to make provision for it first before they can seek for such rights.' Credit:

Voices of Women, Divorcees and Orphans of Nigeria cancelled the march, under heavy pressure from religious authorities and others in the state. But the difficult conditions faced by divorced women and their children remains an urgent issue in Kano and elsewhere in the north.

Mufuliat Fijabi, a senior programme officer with BAOBAB for Women’s Human Rights, an NGO based in Lagos, told IPS that “divorce is just a tool to relegate women to the background”. Baobab has outreach teams working throughout northern Nigeria to educate women about their rights and how to defend them.

IPS: Kano State is said to have the highest divorce rate in Nigeria: do you have an exact figure? Mufuliat Fijabi: It is high but we do not have any figures presently.

IPS: What is the status of women who get divorced in Kano? Who takes care of their welfare and those of their children? MF: You know the status of a woman who has to go back to her parent’s one-room apartment. Even while living with their husbands, the standard of living is poor for some of them, so when they move into their parent’s house, the situation becomes critical.

IPS: What are the typical reasons for divorce in Kano State? MF: When you talk about divorce, under Muslim law, Kano is known to be one of the states where this is on the increase. It is widespread in the state.

But most of the time what you find is that (divorce) is being used as something to relegate women to the background and at times as a form of punishment against a woman, which is an issue that concerns Baobab as a woman’s right group.

Baobab has an outreach team in Kano and we have been working closely on the issue of divorce with the team and with other women in the state. We know very well that divorce is used sometimes as a punishment for women.

It could also be on the grounds that the two parties concerned are no longer interested in the relationship and both agreed to divorce to go their separate ways.

Divorce according to Muslim laws may take place on the grounds that the husband batters the wife which is something that could lead to death if not curtailed on time.

But divorce in Kano, is usually not because of any of these reasons. More commonly heard is, I want to marry another wife and I already have four, so let me drop one and bring in another one.

Flimsy reasons: some husbands say women do not cook well. Some say they want boys and the woman is not giving them boys. But women do not manufacture children; they are gifts from God.

Sometimes it’s that the woman wants to seek for more education and the husband feels that if she goes to school now, she may become something else, and so he divorces her.

Divorce is something that is used as a tool to relegate women to the background, to make women feel less human.

IPS: Can a woman also seek a divorce under Islamic law? MF: Under Muslim law, a woman can also seek for divorce. The woman can ask for ‘redemption’ from her marriage, get her freedom if she feels that the marriage is no longer working for various reasons. It could be on the ground of battery, domestic violence. It could also be on the ground of the sexual state of the husband.

But what we find in Nigeria is that any time a woman attempts to seek for divorce using this method – especially in Kano because the judges that are there are also patriarchal in their thinking – they make the process difficult for a woman to achieve.

IPS: Divorce by means of proclaiming, I divorce you three times. Is this not the normal standard in Islam? MF: To divorce a woman through pronouncing it three times at a go is not found anywhere in Muslim law or contained in the Islamic jurisprudence. It is just that over the years, it has become the tradition. It is out of place.

The Islamic provision is that if you are divorcing a woman, it has to be spread over a three-months period. And the pronouncement must be made during her menstrual period so that she is sure she is not pregnant during the process of the divorce and also to ensure that as they stay together during the process, there might be some kind of reconciliation.

But if a husband pronounces it three times at a go, there will not be any room for reconciliation.

I must also mention that under Islamic understanding, it is stated clearly that divorce is one of the things Allah hates most and does not encourage his adherents to go through that process, but that if it is needed to go through it. They should in order to maintain their sanity.

That is why the pronouncement has to take place over a period of three months. Some couples who adhere to the standard sometimes reconcile after the first or second month.

What is happening especially in Kano is just out of place. It is giving a lot of women who face this challenge a lot of psychological pains and emotional torture.

There is a campaign from women’s rights groups now to really talk about this issue, to raise awareness, even trying to get the men to understand that divorce is something that should be stopped.

IPS: Can better education change the status of women such that they can also ask for their rights in a divorce, for example asking the husband to pay alimony because of the things they have worked to acquire together? MF: I think that when women get information and they are educated, it will enhance their economic status, such that if the men decide to divorce them three times at a go, they can assert their rights and they can establish themselves.

But in terms of educating the men to make them become more responsible, this needs sensitisation and awareness campaign on the part of social workers, NGOs and Islamic scholars.

Divorce is not favourable to women. I find it absurd and I think the government should do something about it. Education can help women to assert their rights, but the law has to make provision for it first before they can seek for such rights.

At the moment there is no provision for compensation for a woman that is divorced. There is nothing in the provision of the Islamic law that a divorced woman should be paid certain amount for being in a relationship for a number of years.

But in wider Islamic jurisprudence, some scholars have identified the need for a due for women who left a relationship as a result of divorce. These include good accommodation and some amount paid to them for their labour in the relationship over the years.

In Nigeria at the moment, there is no such provision. With advocacy, we hope we will get to a point whereby there will be a law in place for their protection.

IPS: Is Baobab doing anything to help divorced women? MF: Baobab has an outreach team in Kano. We also have outreach teams in other states. We have 14 outreach teams most of them in the north. What we do is raise awareness of women and their rights.

They are now aware that nobody can tell them not to go to school. They know that it is important to be economically empowered. These are some of the things that we talk about in the awareness campaigns.