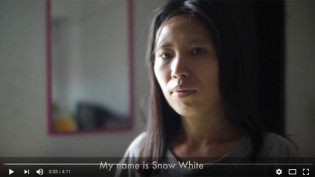 The Real-Life Tale of a Domestic Worker

By UN Women
Snow White is from Karen State, Myanmar. Her father died when she was 11, leaving her responsible for the care of her mother and younger siblings. Lacking opportunity and education in her hometown, Snow White joined a group of friends hoping to be smuggled into Thailand to find work as domestic workers, setting off a harrowing journey that nearly left her dead. Watch our story to find out how Snow White’s story unfolds.

By UN Women
Five years ago, when Meliya Gumi’s two daughters, Gifty* and Chaltu,* aged 16 and 18, migrated to Dubai and Qatar respectively, as domestic workers, everyone thought they were moving towards a better future. As a widowed mother of eight with little resources, living in the village of Haro Kunta in the Oromia region of Ethiopia, Gumi had a difficult time making ends meet.

By UN Women
To the world they are known as “refugees”. Nameless, faceless, all the same. But each of them have a different story to tell, of their lives, who they lost, and how they got here. Fleeing from the devastating conflict in the Central African Republic (CAR), today they are rebuilding their lives, one day at a time, in a camp in Cameroon. UN Women supports economic and social rehabilitation to some 6,250 vulnerable women and survivors of sexual and gender-based violence there. These are some of their stories.

By UN Women
In August it’s blazing hot in Kathmandu. Dawa Dolma Tamang, 32, sits on a chair at Pourakhi’s office—an organization that works with migrant women workers—staring out of the window. “I want to send my children to a better school and support my husband to make a decent living. I want to make my family whole again," she says.

By UN Women
“This is my second time living in communal camps, second time running away from civil war to protect myself. What made me leave [Burundi] was the problem of random people invading others’ homes, attacking those without husbands. They would enter with knives. Before they kill you, they would first rape you. When I saw those attacks, and people dying, I left with my one-year-old son. I didn’t have the chance to get all my children because it was a case of everyone for themselves, running for their lives.

By UN Women
A year after political violence erupted in Burundi, nearly 300 000 people have fled to neighboring Tanzania and Democratic Republic of Congo.

By UN Women
“When we were forced to leave our country, I never thought that a community in Lebanon would accept and treat me as an active member, the way I have been at the Kfeir Women’s Working Group,” says Hiba Kamal, an 18-year-old refugee from Syria who travelled to Lebanon with her family five years ago fleeing instability in her own country.