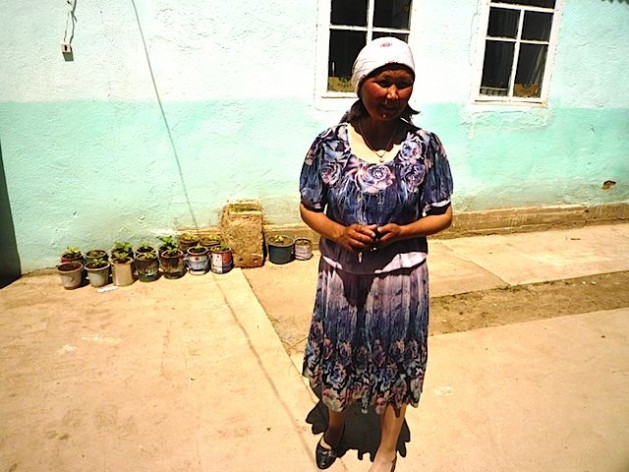 UNITED NATIONS, Sep 3 2014 (IPS) - In the small rural village of Svetlaya Polyana, not far from the city of Karakol in Issyk Kul Province, north-eastern Kyrgyzstan, there is no sewage system and 70 percent of households lack access to hot water.

But still, gardening efforts are underway. In the houses of the women members of the community fund you can see seedlings of cucumbers, tomatoes, pepper and even some flowers being prepared for planting in the soil.

There are currently 29.9 million migrants in Southeastern Europe, Eastern Europe and Central Asia, the majority of which are women. -- International Organisation for Migration (IOM)
These women are taking part in one of several agricultural trainings to learn how to plan vegetable gardens, prepare the soil, find good-quality seeds, plant and care for vegetables, as well as gardening tips, recipes and more.

“We all have learned a lot. Now I know what to do to get a good harvest,” said one beneficiary. “Now I have a beautiful and eco-friendly garden, I have healthy vegetables for my family that I know how to plant myself and I do not have to buy anything more at the bazaar.”

Through collective vegetable cultivation, their harvest in 2013 garnered a profit of 48,000 Kyrgyz SOM (about 930 dollars), which was put back into community projects and to buy high-quality seeds.

The small businesses established through the programme are now generating employment in this rural area, increasing independence and boosting household income not only in summer but also during the harsh winter months, when preserved vegetables and fruit jams are sold.

“The […] project is highly important for the development of our community,” says Jylkychy Mamytkanov, head of the municipality of Svetlaya Polyana. “Programme participants have managed to build solidarity and mutual assistance among themselves. … Moreover, the income that we have already received from selling our vegetables will allow our community to make new investments in the future, such as construction of greenhouses.”

Across Central Asia, many families and individuals living in poverty migrate in order to find work. According to the IOM, there are currently 29.9 million migrants in Southeastern Europe, Eastern Europe and Central Asia, the majority of which are women. Migration provides a vital source of income, but those left behind often feel dependent and have a hard time making ends meet.

To tackle such challenges, the Central Asia Regional Migration Programme (CARMP) was created in 2010, with the second phase currently underway, until March 2015.

Jointly implemented by UN Women, the World Bank and the International Organisation for Migration (IOM), with financial support from the UK Government, the programme focuses on reducing poverty by improving the livelihoods of migrant workers and their families, protecting their rights and enhancing their social and economic benefits.

The regional migration programme focuses on families from the region’s top two migrant-sending countries – Tajikistan and Kyrgyzstan. In 2011-2013 more than 5,324 labour migrants’ families in both countries received training, access to resources and micro-credits and became self-reliant entrepreneurs through the programme.

The RMP programme also promotes policy development, provides technical assistance and fosters regional dialogue on migration and the needs of migrant workers across Tajikistan, Kazakhstan, Kyrgyzstan and the Russian Federation. In those four countries, more than 520,000 migrant workers and their families have benefitted from a wide range of services, including legal assistance and education.

Dreams and designs in Tajikistan

Born in the remote district of Gonchi, northern Tajikistan, Farangis Azamova had a dream of becoming a designer, but with no means to finance university studies, the young rural woman had to find another means to realize her dreams.

With assistance from the Association of Women and Society, a long-time partner of UN Women and beneficiary of the regional migration programme, Farangis and five like-minded women established a community-based “self-help group” to sew curtains.

They took part in various seminars, learning how to set up, plan and manage a business. They rented a small place and established an atelier.

At first they sold curtains to neighbours, but with time their clientele grew. In June of 2014, her group took part in the annual traditional ‘Silk&Spices’ festival in Bukhara, eastern Uzbekistan, which brings together handicrafts from the entire Ferghana Valley.

It was an exciting opportunity for young women entrepreneurs to exchange experiences, learn to become more competitive in the labour market, take craft-master classes as well as present their handicrafts and find new buyers.

This article is published under an agreement with UN Women. For more information, visit the Beijing+20 campaign website.