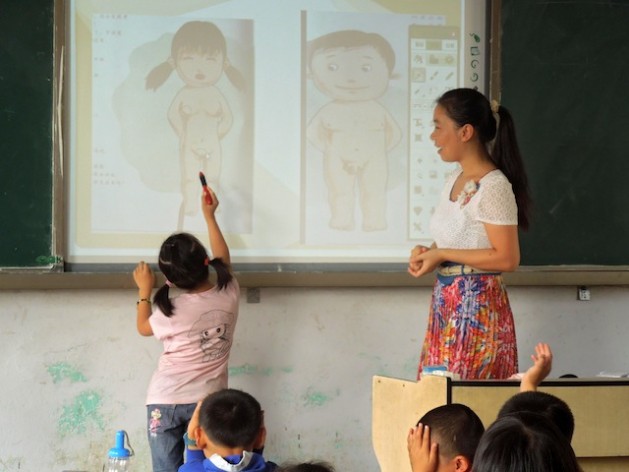 UNITED NATIONS, Jul 30 2014 (IPS) - A normally quiet second-grade student, Yuan Yuan* suffers from a mild mental disorder that impacts her ability to learn and communicate. Her father, also mentally disabled, left her several years ago to find work in the city and his family hasn’t heard from him since. Unable to support the family, her mother also left and never returned.

Yuan Yuan’s paternal grandparents have been caring for her since. But they are not always there.

“I am scared of that man… he laughed at me and touched me. I don’t like him,” eight-year-old Yuan Yuan admitted during a visit from Zhang Xinyu, a programme officer with the Beijing Cultural Development Centre for Rural Women (BCDC), after a local Women’s Federation referred her complaint that a 70-year-old neighbour had sexually assaulted her.

In Yuan Yuan’s case, BCDC paid for her medical treatment and worked together with the local Women’s Federation to ensure they could respond and prevent any further attempts of the neighbour to access the child.

Yuan Yuan is among more than 2,500 girls being helped by a programme funded by the United Nations Trust Fund to End Violence against Women, which is managed by UN Women on behalf of the U.N. system

China’s rapid economic growth, driven by manufacturing industries on the eastern side of the country, combined with high unemployment and low wages in the central and western regions have driven China’s incredible internal migration of an estimated two million people moving from the rural countryside to its industrial cities.

“To protect ourselves and learn how to say NO to strangers is very important,” says Xiao Mei, a student in the 7th grade.
In many cases, parents are compelled to migrate to the cities without their children because of the hukou (household registration) system, which stipulates that children access public schooling only in their home town or village.

According to a 2012 report by the All-China Women’s Federation, the number of left-behind children totals over 61 million, with the number of girls totaling over 28 million.

In addition to funds, the UN Trust Fund, UN Women provides technical assistance to BCDC on reducing the risk of sexual violence against rural children, with a particular focus on girls whose parents have migrated to the cities. The programme seeks to increase girls’ sexual knowledge and self-protection; ensure that both guardians and the community are willing and able to provide the guidance needed to reduce their vulnerability to sexual abuse; and to alter the social environment that promotes sexual violence and empower women and girls.

“To protect ourselves and learn how to say NO to strangers is very important,” says Xiao Mei, a student in the 7th grade. She says she was very proud that she could share a training manual and her learned self-protection skills with her siblings. “My older sister said to me that she was very shy and never had this information in the past.”

The programme implemented by BCDC has set up six resource centres (three community-based and three in schools) to protect children and prevent sexual violence.

In villages, they establish managerial groups and in schools, teachers organise activities around the themes of left-behind girls’ safety, such as reading activities, lectures and performances to raise awareness of prevention of child sexual abuse.

Furthermore, with the funding from the UN Trust Fund, technical support from UN Women and national experts, a series of handbooks on girls’ safety education, covering everything from knowledge about sex and sexual abuse to gender-based violence, were produced and disseminated.

Shen Xiaoyan, a primary school teacher in Suizhou, a city in central China, recalls a remark by a colleague when she was preparing a presentation for a student sexual safety training in 2013: “These things [sexual education materials] appear so normal to me [now]. Why did I feel embarrassed about them only a few years ago?”

The programme has changed attitudes and removed barriers of silence, with several stakeholders reporting cases of sexual abuse.

“After training and project activities, local residents and government officials have become willing to seek out all possible resources to help victims of child sexual abuse,” said the BCDC’s Xinyu.

“In the past, this kind of information was considered secret, deterring victims and family from revealing it to other people.”

In a testament to the growing attention to the plight of left-behind children and the sexual abuse against left-behind girls, proposals influenced by the programme were submitted in 2012 by the Women’s Federation to the People’s Congress and the People’s Political Consultative Conference in Suizhou.

In 2013, the Educational Department in Suizhou issued a policy document requiring the strengthening of safety education for students in all primary and middle schools.

*Name changed to protect her identity.