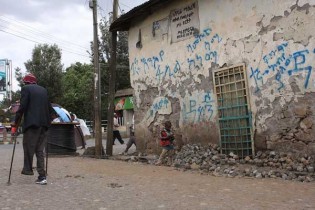 By Vani S. Kulkarni and Raghav Gaiha
With about 109 million people, Ethiopia is the second most populous nation in Africa after Nigeria, and the fastest growing economy in the region. However, it is also one of the poorest, with a per capita income of $790.

By Vani S. Kulkarni and Raghav Gaiha
About 15% of the world's population lives with some form of disability, of whom 2-4% experience significant difficulties in functioning. Disability is part of the human condition, and almost everyone will be temporarily or permanently impaired at some point in life, and those who survive into old age will experience increasing difficulties in functioning. Here the focus is on empirical validation of whether disabilities are associated with economic hardships through loss of employment and consequently impoverishment in rural India. The motivation stems from continuing neglect of health in the budgetary allocations –including the allocations for 2020-21.

The value of a health scheme

The challenges for the success of Ayushman Bharat are more than just at the financial and infrastructural level On September 24, the government launched the grand government-funded healthcare scheme, the Ayushman Bharat-Pradhan Mantri Jan Arogya Yojana (PMJAY). While some see its ambitious goals as its main strength, others are sceptical given the inadequate funding for the scheme, the weak infrastructure of primary health care centres, and the time required for the goals to be accomplished. However, nobody disputes the imperative of an insurance scheme as vast as the PMJAY, since every year about 36 million families, or 14% of households, face a medical bill that is equal to the entire annual living expenses of one member of the family. This frequently pushes many families into penury.

By Pratima Yadav, Raghav Gaiha, and Vani S. Kulkarni
Old age morbidity is a rapidly worsening curse in India. The swift descent of the elderly in India (60 years+) into non-communicable diseases (NCDs e.g. cardiovascular diseases, cancer, chronic respiratory diseases and diabetes) could have disastrous consequences in terms of impoverishment of families, excess mortality, lowering of investment and consequent deceleration of growth.

Are Prospects of Rural Youth Employment in Africa a Mirage?

By Raghav Gaiha and Vani S. Kulkarni
Many recent accounts tend to dismiss productive employment of youth in rural areas in Africa as a mirage largely because they exhibit strong resistance to eking out a bare subsistence in dismal working and living conditions. We argue below on recent evidence of agricultural transformation that this view is overly pessimistic, if not largely mistaken.

By Raghav Gaiha and Vani S. Kulkarni
Undernutrition is widespread and a key reason for poor child health in many developing countries. In Sub-Saharan Africa, around 40 percent of children under the age of five suffer from stunted growth, that is, severely reduced height-for-age relative to their growth potential. Stunting is a result of periods of undernutrition in early childhood, and it has been found to have a series of adverse long-term effects in those who survive childhood. It is negatively associated with mental development, human capital accumulation, adult health, and with economic productivity and income levels in adulthood.

The ‘Public’ in Public Health

By Vani S. Kulkarni and Raghav Gaiha
Implementation of the Mental Healthcare Act will require a restructuring of health-care services The Mental Healthcare Bill, 2016, which was passed in the Lok Sabha on March 27, 2017, has been hailed as a momentous reform. According to the Bill, every person will have the right to access mental health care operated or funded by the government; good quality and affordable health care; equality of treatment and protection from inhuman practices; access to legal services; and right to complain against coercion and cruelty. The Bill also empowers a mentally ill person to choose a treatment and her/his nominated representative, decriminalises attempted suicide, prohibits the use of electroconvulsive therapy (ECT) to mentally ill adults without the use of muscle relaxants and anaesthesia, and contains provisions for care, treatment and rehabilitation for those who have experienced severe stress and attempted suicide. While these are laudable and ambitious objectives as they address major concerns of mental health care, there have been some critiques drawing attention to the lack of funds, trained personnel, and insufficient emphasis on community care. The ground reality, however, suggests that these objectives are not just overambitious but an overkill.

By Raghav Gaiha and Vani S. Kulkarni
Imminent demise of small farmers is predicted as they are not competitive in a context of transforming agrifood markets. Most important is the transformation of the "post–farm gate" segments of the supply chains.
ADVERTISEMENT ADVERTISEMENT