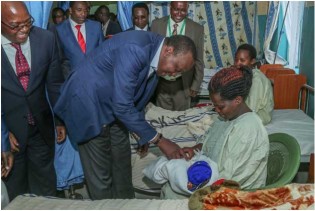 By Werner Schultink and Rudi Eggers & Siddharth Chatterjee
The Government of Kenya has prioritized universal health coverage (UHC) in its Big 4 agenda over the next 5 years. This is a significant and perhaps the most important strategic priority. Why? Every year over a million Kenyans get trapped into poverty because of a catastrophic out of pocket payments due to health reasons.

By Siddharth Chatterjee and Werner Schultink
Consider this: in 1956 Sweden and Kenya’s population was roughly at 7 million. Today Sweden has about 9.8 million, while there are about 44 million Kenyans. Fertility levels are declining gradually and Kenyans are living longer. It is estimated that there will be 85 million people in Kenya by 2050, with three quarters of these being below 35 years. While Kenya’s median age is 19, Sweden’s is 42.
ADVERTISEMENT ADVERTISEMENT