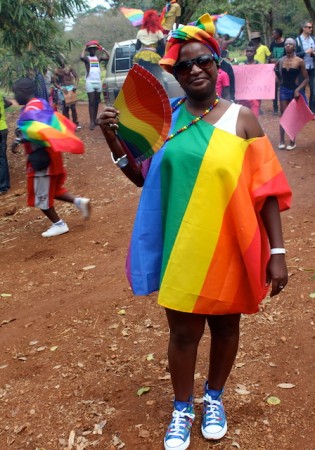 By Amy Fallon
As she sits in a Kampala hotel holding a mobile phone that rings frequently, Sandra Ntebi tells IPS: “I’m really exhausted. I don’t know where to start. We have many cases pending.” Ntebi manages a hotline and is helping Uganda’s lesbian, gay, bisexual, transgender and intersex (LGBTI) community find alternative, safe accommodation after they have faced harassment.

By Amy Fallon
“People in Ukraine took over power. “Celebrated a few days, then the party went sour…” raps Sharon Bwogi, aka Lady Slyke, on NewzBeat, a weekend show that airs on Uganda’s channel NTV in both English and the local language Luganda.

By Amy Fallon
Human rights campaigners who filed a recent legal petition against Uganda’s draconian anti-gay law believe that they have a compelling case for its nullification.

By Amy Fallon
Uganda’s gays are bracing themselves for a spate of arrests and harassment as the country’s draconian anti-gay bill was signed into law by President Yoweri Museveni on Monday, Feb. 24.

By Henry Wasswa
Gay activist Gerald Ssentongo of Uganda is afraid to talk openly about his cause. Not only that, but he is terrified of being “caught” socialising with gay people and only meets his friends at night in out-of-reach places.
ADVERTISEMENT ADVERTISEMENT