UNITED NATIONS, Dec 21 2012 (IPS) - For more than two decades, the internationally beloved singer and human rights activist Yvonne Chaka Chaka has been at the forefront of the South African pop music scene. 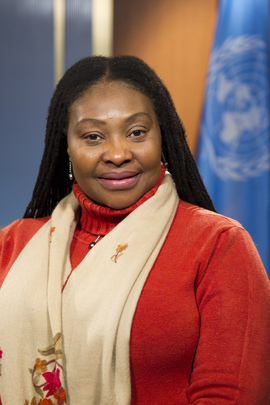 Growing up during Apartheid, Chaka Chaka had a difficult childhood. After losing her father at the age of 11, Chaka Chaka’s mother was left to raise three daughters as a single mother with a meagre salary.

She grew up in a society rife with social, class and ethnic segregation, but this did not prevent Chaka Chaka from graduating with two diplomas from the University of South Africa (UNISA).

She was discovered in Johannesburg in 1985 and went on to release award-winning albums with hit songs like “I Cry for Freedom”, “Back on my Feet” and “Power of Africa”.

Chaka Chaka not only reached stardom status in South Africa and the Mbaganga music scene –a South African music style – but was also anointed the Princess of Africa.

“Being a public figure with a popular following is a great privilege but it comes with special responsibilities,” the singer told IPS in an interview.

The Princess of Africa is also known for her charity work. In addition to being Goodwill Ambassador for the UNISA and Chief Executive Officer of Gestetner Tshwane, UNICEF has also appointed her as Special Ambassador on Malaria in Eastern and Southern Africa.

Chaka Chaka spoke to IPS U.N. correspondent Rebecca Hanser on growing up in South Africa, her life as a world-class performer, and her work as a human rights activist fighting illiteracy, poverty, homophobia and illnesses like HIV and malaria.

Q: Having grown up in South Africa, what was the situation like in terms of race in your country?

A: I was born in Soweto and grew up under apartheid. The fight against discrimination runs deep in my veins. I know what it is like to be treated as inferior because of the colour of my skin.

When we remade our country it was on the basis of the equal worth and the equal dignity of every member of our society.

We learned the lesson the hard way in South Africa but we will never forget it. Nelson Mandela created the Rainbow Nation and I believe we are all equal. That is what we fought for: our freedom.

Q: Throughout Africa, discrimination based on race, ethnicity and sexual orientation is still active. Stories of violence and discrimination against the gay community inflicted by their own families reach us on a daily basis. Being a mother yourself, what is your response to this?

A: These stories break my heart. Sadly, we hear similar stories from many different parts of the world. Is it not already bad enough that our lesbian and gay brothers and sisters are stigmatised, discriminated against and attacked?

The fact that many cannot even rely on the love and support of their own parents makes it even worse. What kind of mother could treat her own children with contempt in this way?

As a mother of four boys myself, I see my job as helping them to be the best people they can be; to discover who they are; to be happy and safe; to love and be loved. I have often said that I don’t care if they bring home an Indian or an Albino, Patricia or Peter, so long as they are happy.

Q: You recently joined Secretary-General Ban Ki-moon and pop artist Ricky Martin at a special event on the need for leadership in the fight against homophobia at the United Nations headquarters. Can you elaborate on the legislation in Africa, and in particular on the anti-gay laws of African nations?

A: Far too many countries on our continent still have laws that treat lesbian and gay people as criminals simply for loving someone of the same gender.

When Western countries tell us as Africans we should get rid of these laws, you hear people saying “No, we are not colonies anymore, these are our laws and we will keep them.” But where did these laws come from? In almost all cases they were imposed by the former colonial powers. Most were written in 19th Century London! They have no place in modern Africa.

When I hear that MPs in Uganda want to introduce the death penalty now for homosexuality or that lawmakers in Nigeria want to strengthen the existing punishments for same-sex couples, it makes me angry and frustrated that people can be so prejudiced. When did we start to treat one another with such contempt?

We need to start again and remember that we are all born free and equal and should have a chance to live that way every day of our lives. We need to respect each other and not be so judgmental or fearful.

Q: What do you think should change to resolve the situation for those suffering from discrimination and violence for being different?

A: First thing we must do is get rid of these antiquated laws that criminalise homosexuality and we need to put in their place new laws that protect everyone from discrimination, including on grounds of sexuality and gender identity. Once we’ve done that, we have a larger task on our hands, which is to change social attitudes, to help people to open their hearts and minds to one another.

Changing the laws is a necessary first step, but it will take education, training and talking with one another to overcome homophobia. But we know it can be done. We are making progress in the war against racism and sexism. It is time to take up the fight against homophobia. This is a war we can win if we all do our bit.