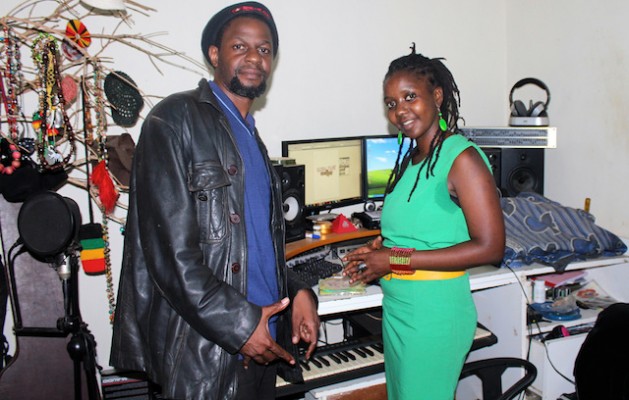 “Celebrated a few days, then the party went sour…” raps Sharon Bwogi, aka Lady Slyke, on NewzBeat, a weekend show that airs on Uganda’s channel NTV in both English and the local language Luganda.

It might sound strange — hearing a news item on the political situation in Ukraine being rapped. But a new show in this East African nation, where half of its 36.4 million people are below the age of 15 and media censorship restricts the information people receive, hopes to grab the audience’s attention through “rhyme and reason”.

NewzBeat airs on Uganda’s free-to air channel NTV and is recorded in an independent studio in a suburb outside the country’s capital, Kampala. The team records one segment between four and five minutes – which takes about half an hour to film using two cameras, a green screen and a few other pieces of equipment – every week.

Each episode includes a mix of four or five international and local stories and includes a human interest, sport and entertainment piece.

Bwogi co-hosts hosts NewzBeat with Daniel Kisekka, aka Survivor, and the show also features 13-year-old anchor MC Loy. She is still in school but acts as the show’s “special correspondent”, making her one of, if not the youngest, “rapping journalist”.

She recently filed a piece on female boxers in Kampala’s Katanga slum for International Women’s Day. The programme, “borrowed” from hip-hop mad Senegal in West Africa, has only been on air for two weeks in Uganda.

“Right now it’s a mixed bag. Obviously the hip-hop fans are crazy about it but there are people who don’t understand it because hip-hop is not big here, it’s just getting there,” Kisekka, a hip-hop veteran who’s been rapping since 1988, tells IPS.

“[But] it encompasses so many things. It’s informative, it’s entertaining, it’s educational.”

He claims most youth aged under 30 are not interested in news and current affairs.

“It has been like that for such a long time,” says Kisekka. “But hip-hop is very popular with them. When we do a hip-hop show they say ‘I didn’t know this happened’. It’s only because we put it in the language they understand.”

Arnold Ntume, 23, stumbled across NewzBeat while channel surfing and is now a regular viewer.

“I was like ‘oh what’s this?’” the videographer tells IPS.

“It’s a different idea in Uganda. I learn more. And there’s some news that we don’t get on the other stations, mostly stories about our real lives.”

Uganda does not have a great track record when it comes to media freedom, which could explain why news consumption among young people may be low.

Last May, two privately-owned newspapers and radio stations were shut down by police for 11 days after reporting on a letter, allegedly written by an army general, that claimed that President Yoweri Museveni was grooming his son to succeed him.

According to the Press Freedom Index Report 2013, released by the Human Rights Network for Journalists-Uganda earlier this month, space for reporters to operate freely in the country has continued to shrink.

Senior researcher at Human Rights Watch’s Africa division Maria Burnett tells IPS that over the years the organisation has documented and raised concerns about the “ways in which the Ugandan government limits free expression under the dubious guise of keeping public order and security.

“We have documented intimidation and harassment of journalists and station managers, especially those who are critical of the government, present opposing political views, or expose state wrongdoing, such as corruption or failure to investigate crimes outside Kampala.

“Uganda’s media regulatory system has shown clear partisan tendencies on several occasions. This is all very troubling because the bedrock of free speech is the right to criticise those in powerful positions,” Burnett says.

NewzBeat is upfront about not being objective but also stresses, speaking in rap terms, “the street party is the only party we affiliate ourselves with.”

Kisekka says the show aims to cover issues that aren’t predominantly given air time on other stations.

Uganda has been generating international headlines of late, after Museveni signed a draconian anti-gay law and another bill which supposedly criminalised women wearing miniskirts and led to attacks on females across the country.

NewzBeat delved into both issues.

“We talked a little about it [the anti-gay law]. We don’t want to overdo it because we know how people feel about this thing,” says Bwogi.

Other items that have been covered include Zimbabwe President Robert Mugabe’s 90th birthday, the trouble in Central African Republic and South Sudan, the Sochi Winter Olympics and climate change.

Once the team decides on the editorial lineup, the creative process starts.

“I love it because I’m doing rhyme but I’m telling a story,” Bwogi, who started rapping in 1999, teaches poetry and song writing and is a fashion designer, tells IPS.

“It was what we were already doing but it was just a matter of getting different topics from different countries.”

She says although the news is delivered in hip-hop the audience can still understand it.

“People like it, they say it’s something they’ve never seen it before. Some are just getting into it.”

“You have to obey the rules of hip-hop. The material has to remain the same. You can’t change the news,” he says.

However, Kisekka says, “I think the process [of writing the script] is better than the end finished product.”

Kisekka says the team hopes to increase its human interest coverage in the future.

“We expect to get sponsors and get more reporters and then expand it to beyond four [minutes], so we can have people who go to northern Uganda [and other places] and get the stories from the people,” he says.