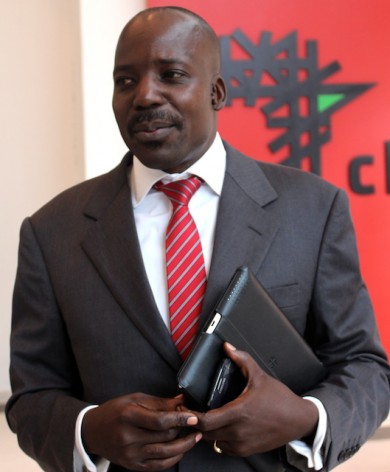 “Personally I do not agree that we’re going to lose in the Constitutional Court and the Court of Appeal… We have a good case.” -- Fox Odoi, a ruling party MP and former legal advisor to Museveni

Opiyo, who helped draft the petition, said the legal challenge “raises important constitutional and legal issues that the court must resolve satisfactorily.”

The petition was filed under the auspices of the Civil Society Coalition on Human Rights and Constitutional Law (CSCHRCL), a coalition of 50 indigenous civil society organisations advocating for non-discrimination.

Although the activist’s immediate family knowns that he is gay, he said his mum was still “heartbroken” after being shown the paper.

“She’s never really come to terms with it and when it became public it was really embarrassing for her,” Ogwaro said.

“She’s cooled down now but it was a bit of a shock to her.”

Among the petitioners is Fox Odoi, a ruling party MP and former legal advisor to Museveni who is the only legislator to speak out publicly against the law.

“I believe it’s irrational, it has no basis, it offends every human right that you can think about, it offends our constitution. It offends our treaty obligations of Uganda,” Odoi told IPS about the anti-gay law.

“As a citizen, as a legislator, as a human rights lawyer, I owe it to the people of Uganda to stand up and challenge it. Of course there’s a big political risk, this society is very homophobic and they’ll brand you all manner of names just because you stood up to speak for the minority. But in life you take a risk even waking up in your bed every day.”

“Personally I do not agree that we’re going to lose in the Constitutional Court and the Court of Appeal… We have a good case,” Odoi said.

A number of distinguished gay rights campaigners and Ugandan NGOs Human Rights Awareness and Promotion Forum (HRAPF) and the Centre for Health, Human Rights and Development (CEHURD) are also named in the petition.

Adrian Jjuuko, executive director of HRAPF, said there had been 10 cases of arrests of LGBTI and suspected LGBTI people since the law was passed by Parliament in December. There were also more than three cases of evictions of tenants by landlords who did not follow due process of the law.

Ugandan activists have vowed for years to challenge the law in court. Campaigners have already notched up two legal victories. In 2011 leading gay rights activist David Kato and two others won a case against now defunct tabloid Rolling Stone, which had called for homosexuals to be hanged. Weeks later Kato was murdered.

In 2008 two lesbians, Yvonne Oyoo and Victor Juliet Mukasa, were awarded 7,800 dollars by a judge who found their rights were violated when the pair was arrested and one of them was undressed by police.

Some activists are hopeful they could win again.

“I think court could work out, it’s usually very objective. It has been very objective in the other two cases that have been won,” Ogwaro of CSCHRCL said.

“However, there are going to be the usual delays because the judges will fear issuing the judgment and how it will be seen.”

The petitioners say that even if the Constitutional Court does not rule in their favour, it is not the end.

“We shall appeal to the Supreme Court. Uganda is [also] a signatory to the law that establishes the East African Community, there is a court and we shall explore that option. We shall keep fighting,” said Odoi.