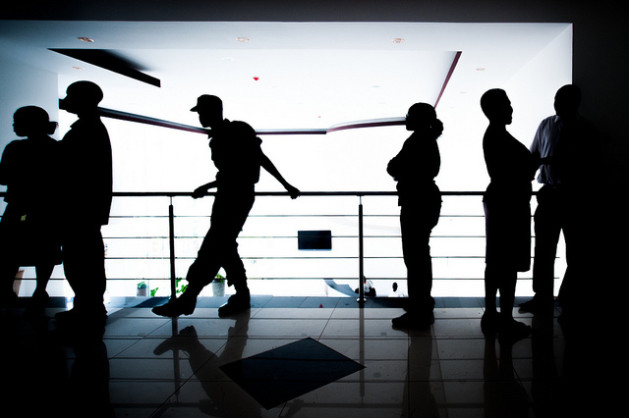 LGBT activists, human rights observers and police officers wait outside a courtroom in Uganda's constitutional court. Many trans women have died in Uganda because of discrimination in the public health service. Credit: Will Boase/IPS

KAMPALA, Dec 16 2013 (IPS) - At an unremarkable office on Bukoto Street in the Ugandan capital, Kampala, health workers and civil society activists attend a regular meeting to offer information and advice on living with HIV and AIDS. What is unusual is that these information sessions cater to a group of around 50 transgender women.

The “Come Out Post-Test Club”, as the group calls itself, was established early this year as a safe space and advocacy group for trans women sex workers living with HIV. The club’s executive secretary, Bad Black, says it is helping to fill a desperately needed gap in support services.

“It is one step in the right direction,” says Black. “We hold online discussions. We also have regular physical meetings in a safe space. We are about 50 members, as of June 2013, although the numbers are growing.”

According to Black, many trans women have died in Uganda because of discrimination in the public health service. “We have lost seven of our colleagues this year alone,” she recounts. “The biggest problem was negligence by the doctors. They never wanted to treat us because of our sexual orientation. We thought many more of us would die if we remained in hiding.”

“Abby wouldn’t have died if the nurses and doctors had not stigmatised her. They wrote the word ‘gay’ on her file." -- Bad Black, executive secretary of the Come Out Post-Test Club

The turning point for the group was in April this year when a colleague, Abbey Mukasa Love, died.

“Abby wouldn’t have died if the nurses and doctors had not stigmatised her,” says Black. “They wrote the word ‘gay’ on her file. We decided to come out and form a support group and 20 of us began holding meetings every Sunday. We would invite some people to talk to us about treatment and prevention. It was not easy for many of us to come out.”

The club’s interaction with health workers at the Bukoto Street office has brought about some changes. According to Black, some health workers are opening up to offer better treatment and support to members of sexual minorities.

“To us that is a milestone, because very few would even associate with us once the Anti-homosexuality Bill was tabled in Parliament in 2009,” Black adds.

The bill, which is still before the Ugandan Parliament, would impose strict penalties against sexual minorities. It proposes the death penalty for the offence of “aggravated homosexuality”.

A survey by Makerere University’s School of Public Health on HIV infection in men who have sex with men (MSM) in Kampala in 2008-2009 found infection rates among this group were almost twice as high as the national average. Whereas the national infection rate on average is 7.5, according to the Uganda AIDS Commission, the Makere University survey puts the rate at around 13 percent for MSM.

Beyonce Karungi Tushabe, the executive director of Transgender Equality Uganda, an NGO working for the rights of transgender people, says it is difficult for transgender people to live with HIV in an environment where they have to keep their identities hidden.

“The restrictions are still the same [since the study]. The stigma is still higher [for transgender] in hospitals. So, the few of us that are on antiretroviral treatment are just the tip of the iceberg,” Tushabe says.

However, there has been some progress for this minority group.

According to Flavia Kyomukama, a member of the Global Coalition of Women against AIDS, Uganda’s new strategic plan on HIV/AIDS control mentions MSM among high risk groups whose HIV prevalence is above the national average.

“This is the first time that our plan is mentioning MSM in HIV/AIDS control. And that is good for MSM and other most-at-risk populations like sex workers,” says Kyomukama, who has lived with HIV/AIDS for 25 years.

In their World AIDS Day message, a coalition of 14 civil society organisations said that they were seeing some positive developments toward mainstreaming MSM and other at-risk populations in HIV and AIDS policy, and treatment by the health ministry and other actors.

Moses Kimbugwe, an activist with Spectrum, an NGO providing HIV and AIDS education and prevention for MSM in and around Kampala, says, “We are happy the Ministry of Health is committed to establishing clinics for MSM and sex workers in Kampala.”

The ministry is also carrying out an epidemiological survey of key at-risk populations in order to determine their estimated size and better define their unmet public health needs.

The secretariat for most at-risk populations – in whose Bukoto Street office the “Come Out Post-Test Club” meets – is now partly funded by the Ministry of Health and the Uganda AIDS Commission.