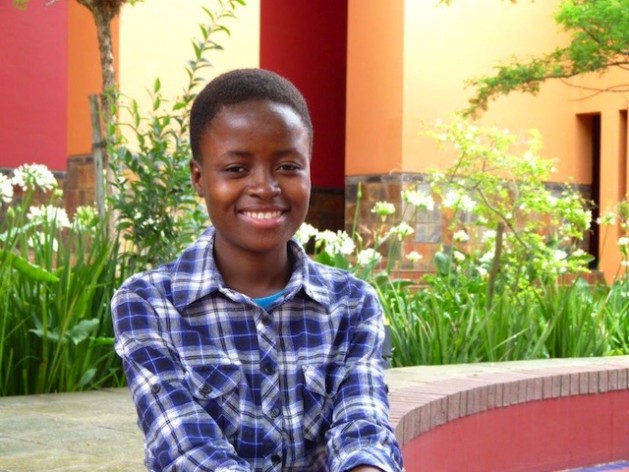 Eighteen-year-old Maureen Phiri from Malawi knows first-hand about the loneliness of HIV. At age 12, she discovered her HIV status but did not tell her mother. Courtesy: Martina Schwikowski

JOHANNESBURG, Dec 6 2013 (IPS) - Maureen Phiri, 18, has a soft voice and a strong message about HIV and young people in her country. “In Malawi, people are still in denial because of cultural beliefs. Traditional leaders and churches are denying the disease. Let us gather those leaders and hear from young people what is really happening.”

Phiri, an activist who lives with HIV, belongs to the Baylor Teen Club in Lilongwe, Malawi’s capital. The club is part of a programme that provides medical care and psycho-social support to HIV-positive adolescents, of whom Malawi has 91,000.

Phiri works hard to overcome the stigma still attached to HIV among her peers. “Only then we will be able to have an AIDS-free generation,” she told IPS.

Phiri was speaking at a forum held in Johannesburg last week, where the United Nations Children’s Fund (UNICEF) presented its Sixth Stocktaking Report about Children and AIDS, entitled “Towards an AIDS-free generation”.

This is the only group where AIDS-related deaths have increased, in stark contrast to progress made in preventing mother-to-child transmission, with more than 850,000 new childhood infections averted in low- and middle-income countries in 2012.

The rise in AIDS-related deaths among youth shows that they are falling through the cracks of HIV programmes mainly designed for adults or children. Many adolescents do not know they are HIV-positive, others lack family support to disclose and start treatment, and some start treatment but quit and die.

In 2012, some 2.1 million adolescents were living with HIV. Of these, 80 percent live in sub-Saharan Africa, says the report. Worryingly, one-third of new infections occur among youth aged 15-24.

“How did we get here? We became complacent,” said Dr. Gabriel Anabwani, executive director at the Baylor Children’s Clinical Centre of Excellence in Gaborone, Botswana.

With an HIV prevalence of 23 percent among a population of two million, Botswana has 7,800 HIV positive adolescents aged 10-19.

The centre reaches teenagers by taking their services to the communities. “HIV is a family disease, so we have to reach out to the families and educate them at home,” Anabwani told IPS.

Disclosure within the family is key and the burden should not be left to the mother alone, who is often “scared to be stigmatised or to be divorced.”

In Lilongwe, Phiri knows first-hand about the loneliness of HIV. At age 12, she discovered her HIV status after she tested with her sister. But Phiri did not tell her mother, who was in denial of being HIV-positive. Phiri had never had sex so she figured she had been born with HIV – yet the daughter was afraid to tell the mother.

She looked for help at her church and was told to trust God. “I relied on God, did not take my pills, and became so sick that I had to go to hospital,” she told IPS.

Later, a boyfriend told her neighbours she was HIV-positive, and she experienced rejection in her community.

Phiri then sought help at the Baylor clinic in Lilongwe. Its staff helped her family learn about HIV and deal with disclosure.

Now a strong, confident young woman, Phiri told IPS, “There are no condoms at school and no health centres where we can go for testing.”

Rick Olson, senior HIV prevention specialist for UNICEF in East and southern Africa, agrees: “We are denying that young people are sexually active.”

What is needed, he added, is “a redefinition of services specifically for adolescents:  more condom distribution, more counselling, more clinics and more advice on male circumcision.”

Uganda earned world praise for successfully implementing the ABC policy – abstain, be faithful, use condoms – that brought the country’s HIV infection rate down from a two-digit rate in the 1990s to today’s seven percent.

“But we missed to drive it further into the new generation,” Specioza Wandira-Kazibwe, the Uganda-born U.N. Secretary-General’s Special Envoy for HIV/AIDS in Africa, told IPS. Infection rates in Uganda are slowly rising after the dramatic drop a decade ago.

“It is a challenge for leadership to move and do the right thing,” said Steven Allen, UNICEF’s regional director for central and East Africa. “We are speaking a language this generation does not understand.”

The dream of an AIDS-free generation will remain a slogan unless ways are found to reduce HIV infection among young people, especially among girls.