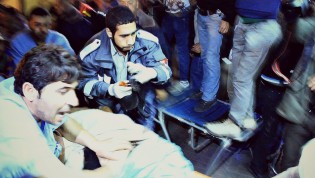 By Mitchell Plitnick and Jim Lobe
Amidst reports of an Egyptian-mediated ceasefire between Israel and Hamas, U.S. President Barack Obama sent Secretary of State Hillary Clinton to the region Tuesday in apparent hopes of gaining some credit for sealing the deal.

By Gareth Porter
Two recent interviews apparently given by Israeli Defence Minister Ehud Barak provide evidence that the new wave of reports in the Israeli press about a possible Israeli attack on Iran is a means by which Prime Minister Benjamin Netanyahu and Barak hope to leverage a U.S. shift toward Israel’s red lines on Iran’s nuclear programme.

By Jim Lobe
Despite continuous assurances that the United States favours democratic rule during the 18-month-old "Arab Spring", majorities or pluralities in six predominantly Muslim countries see Washington as an obstacle to their democratic aspirations, according to a new survey released here Tuesday.
ADVERTISEMENT ADVERTISEMENT