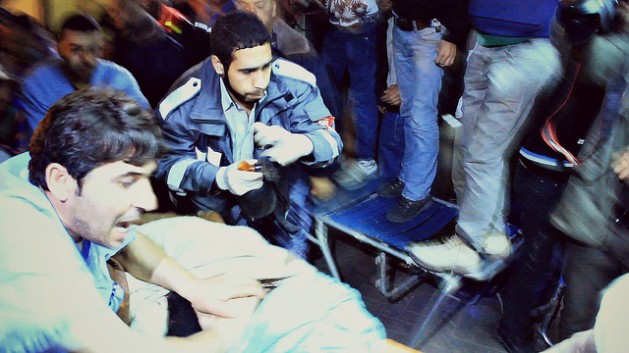 WASHINGTON, Nov 20 2012 (IPS) - Amidst reports of an Egyptian-mediated ceasefire between Israel and Hamas, U.S. President Barack Obama sent Secretary of State Hillary Clinton to the region Tuesday in apparent hopes of gaining some credit for sealing the deal.

Until Tuesday, Obama, whose four-day swing through Southeast Asia was designed in part to underline his administration’s “pivot” from the Middle East to the Asia Pacific, had confined his involvement in the past week’s violence to telephone calls to regional leaders, public statements of support for Israel softened by concern for civilian casualties, and hopes for de-escalation.

The staunch backing Washington has given Israel for its latest assault on the Gaza Strip has seemed to be business as usual, not so very different from the position taken by the George W. Bush administration during Israel’s three-week 2008-9 “Operation Cast Lead”, which ended with more than 1,400 dead, all but 13 of them Palestinians.

At the time, Obama had just been elected president. Part of his campaign had been a promise to mend relationships internationally that had been badly damaged by Bush, especially in the Muslim world.

Almost exactly four years later, Israel launched a new assault – more than 130 Palestinians have been killed so far, while the Israeli death toll was five as of Tuesday morning – and Obama has been unwavering in his support for “Israel’s right to defend itself”.

However, the administration has also made known its preference that Israel not introduce ground forces that have been massed along the Gaza border over the last several days.

Congress, as might be expected, has been even more extreme, with both houses issuing nearly identical statements in full support of Israel’s actions without either urging an end to hostilities or, unlike Obama, expressing concern for civilians on either side.

Those omissions stood in stark contrast to the resolutions passed by both houses four years ago during Cast Lead, a reflection of the degree to which Congress has reflexively taken Israel’s side over that period.

“Some might suggest that these omissions weren’t deliberate,” said Lara Friedman, a veteran Middle East specialist and director of policy and government relations for Americans for Peace Now. “This suggestion hits a wall, however, given that much of the … text appears to be drawn directly from (the resolutions four years ago).

“This pared-down version …sends the message that the Senate isn’t concerned about harm to civilians, and that the Senate is in no hurry to see a ceasefire…Such a message seems both politically shortsighted and morally dubious,” she told IPS.
A poll conducted by CNN over the weekend found that 57 percent of respondents considered Israel’s actions justified, a small decline from the 63-percent support Israel’s actions enjoyed four years ago. The poll, however, also disclosed sharp partisan differences compared to 2008.

Only 40 percent of Democrats said they believe Israel’s actions this past week were justified, a 12-percent drop from the Cast Lead poll, a finding made potentially more significant given the so far much lower casualty toll compiled so far in the latest operation.

Republican support – about 75 percent – remained about the same.

Despite the lack of support from voters within his own party, it is not surprising that Obama has so far stood behind Israel. Even a second-term president, while theoretically freer to act since he need not worry about running for re-election, is still concerned about his congressional allies and his need to work with Congress on key initiatives.

And in this case, Obama has some more immediate concerns that would make him averse to taking on the powerful pro-Israel lobby at this time, despite his well-known personal dislike for Israeli Prime Minister Benjamin Netanyahu.

With the Dec. 31 deadline for reaching a budget agreement with Congressional Republicans on averting the so-called “fiscal cliff”, the last thing Obama wants to do is get into a major partisan battle – and risk splitting his own party’s Congressional delegation given its strong support for Israel – over an unrelated matter. The same considerations may well carry over into the New Year when a new Congress is seated.

Obama has thus seemed to have preferred to leave most of the work to mediate a ceasefire to Egypt in what might be a test of the new Muslim Brotherhood-led government’s intentions to preserve the 1979 Camp David Accords.

Both Israel and Hamas have discussed a ceasefire with Egypt, just as they did in the past when Egypt was ruled by Hosni Mubarak, an ally of the United States, whose strict adherence to the Accords and seeming indifference to Gaza and the Palestinians were always unpopular in Egypt.

The big question many analysts are asking now is what the government of President Mohammed el-Morsi will do if it fails to reach a cease-fire accord, thus ensuring a continuation of hostilities and the very real possibility that Israel will send ground forces into Gaza.

Some U.S. lawmakers have expressed scepticism about Morsi’s intentions, with Sen. Lindsay Graham, an influential Republican, suggesting that the more than 1.6 billion dollars in U.S. bilateral aid to Egypt will be on the chopping block if his efforts fail to achieve a result satisfactory both to Congress and to Israel.

There have also been suggestions that promised debt relief for the struggling Egyptian economy, as well as a pending 4.8-billion-dollar loan from the International Monetary Fund (IMF), could be at risk.

Israel also apparently wants to see whether Egypt can broker a ceasefire. Netanyahu rejected a French-Qatari ceasefire proposal over the weekend, insisting that negotiations be run through Egypt alone. Only a few hours earlier, the White House reported that President Obama had spoken with Morsi to discuss ways to “de-escalate” the fighting.

Netanyahu is also aware that Egypt, due to its proximity and the close relationship between Hamas and the Muslim Brotherhood, is the best guarantor of any cease-fire.

On the other hand, the longer the intensified fighting with Gaza goes on, the more Israel risks inflaming the populations not only of Egypt, but possibly also of Jordan, whose government, a de facto ally of the Jewish state, has been struggling over the past week to cope with growing economic protests.

Obama, as well as and his European colleagues, clearly want to see this latest flare-up end as soon as possible and that Egypt under Morsi will continue playing the role it served under Mubarak.

Indeed, Clinton’s eleventh-hour mission to Jerusalem, Ramallah and Cairo would likely be designed to seal that outcome, as well as a ceasefire agreement, according to Robert Danin, a Middle East specialist who served in the Bush White House.

Clinton’s presence “will make it much more difficult for the parties to break a cease-fire” if one is concluded, he told a teleconference with journalists from his perch at the Council on Foreign Relations (CFR).

She is also being sent “to impress on President Morsi that Hamas has to be kept in line,” he said, noting that the longer-range rockets used by Hamas during the current hostilities are being smuggled in part through Egyptian territory.