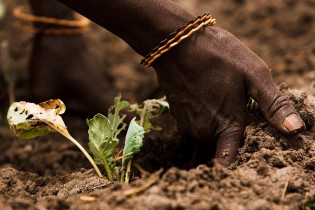 By Manipadma Jena
Worms and termites are not likely to win hearts and minds, but they, along with lichens and microbes, are vital to food security, say biodiversity specialists who attended this month’s United Nations conference on the Convention on Biological Diversity (CBD) in this south Indian city.

By Karina Boeckmann
Land degradation poses a threat to all life on Earth including humanity. To stop the enormous loss of life-giving land, the United Nations Convention to Combat Desertification (UNCCD) is pushing for a sustainable development goal of Zero Net Land Degradation (ZNLD) to be adopted at the upcoming Conference on Sustainable Development, known as Rio+20, in Brazil.

By Manipadma Jena
Delegates to the United Nations Convention to Combat Desertification’s (UNCCD) meeting underway in this South Korean city are convinced that women, though affected most by desertification, hold the key to addressing hunger through land regeneration.
ADVERTISEMENT ADVERTISEMENT