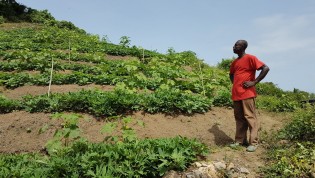 By Alison Kentish
In 2015, the Caribbean was “the region that could” on the climate change scene. Countries rallied under the ‘1.5 to Stay Alive’ banner, in the face of an existential threat. The now former Sustainable Development Minister of Saint Lucia Dr. James Fletcher emerged as a climate change champion at the time. But now, three years on, the scientist is giving regional climate action a C- in an assessment.
ADVERTISEMENT ADVERTISEMENT