Jun. 17 is World Day to Combat Desertification and Drought. Amid reports that half of the earth’s agricultural land is degraded, countries are reporting on progress to revive arable land and restore biodiversity and ecosystem functions. 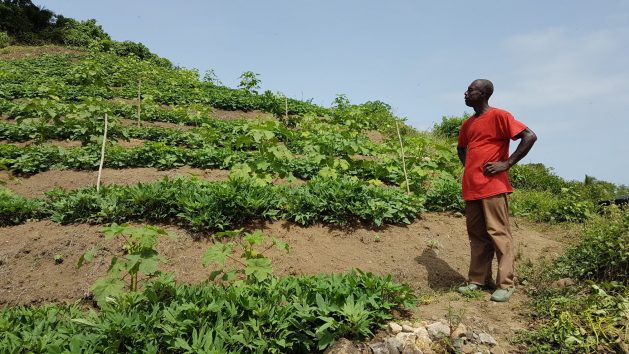 A Saint Lucian farmer surveys his crops, during the annual dry season. Amid reports that half of the earth’s agricultural land is degraded, countries are reporting on progress to halt land degradation. Credit: Alison Kentish/IPS

“In India, over the last 10 years, around 3 million hectares of forest cover has been added. This has enhanced the combined forest cover to almost one-fourth of the country’s total area,” the Prime Minister told the Jun. 15 gathering.

He added that the country is working towards restoring 26 million hectares of degraded land by 2030. That goal is part of the 2019 Delhi Declaration, in which member countries of the UN Convention to Combat Desertification (UNCCD) pledged to enact national drought plans and restore land and soil affected by desertification and drought.

Land degradation, or the deterioration of soil to the point that it is no longer able to support ecosystems, is caused by both climate change and human activity such as deforestation.

It is a global concern.

The UN classifies half of all agricultural land as degraded. The impacts are far-reaching. They include widening food insecurity, with the world’s crop yields estimated to fall by 10 percent by 2050. The knock-on effect will be a spike in food prices as high as 30 percent, which could send hunger levels skyrocketing.

Statistics like these are drivers for the pledges in the Delhi Declaration.

They have also spurred a renewed commitment by countries to work towards achieving 15.3 of the Sustainable Development Goals – the attainment of a land degradation-neutral world.

Land Degradation Neutrality or LDN refers to the revival of land and subsequent restoration of biological and ecosystem functions, through sustainable practices.

It is a concept adopted at various levels in Saint Lucia.

That country has tackled soil erosion and degradation through agroforestry. Forestry officials encourage and provide assistance to farmers to plant trees on their land, along with their crops. The trees help to protect the soil, the crops and nearby rivers, while providing an additional source of income for farmers.

“Storms, climate change and deforestation lead to land degradation. We had to rehabilitate Saint Lucia’s riverbanks. By encouraging farmers to plant some native forest crops along with other plants that have economic benefits, this is resulting in reforestation, stabilisation and an income for the farmers,” he said.

The small island states of the Caribbean have been battling crippling drought for the past 5 years. For many countries, prolonged drought leads to rationing by water companies.

In June 2020, the Saint Lucian government declared a water emergency, with the Prime Minister Allen Chastanet warning that it was the worst drought the country had seen in a half-century. He told the nation that water levels at the Jon Compton Dam, which supplies water to over half the island, were dangerously low.

It is a reality that regions across the world are facing.

According to the UN, climate change-fuelled desertification and drought, combined with the economic impact of the COVID-19 pandemic put 34 million people at risk of famine. The organisation says 2021 will be a critical year for restoring balance with nature.

For Hindou Oumarou Ibrahim, Coordinator of the Association of Peul Women and Autochthonous Peoples of Chad, restoration cannot be achieved in the absence of support from indigenous communities.

“We all know that for indigenous peoples there is no difference between human beings and nature. We are part of nature,” she told the UN High-Level Meeting.

“With our way of life, our traditional knowledge, if we want to protect the ecosystem, we need indigenous peoples and local communities in rural areas. They can restore the land, the ecosystem and contribute to climate adaptation and mitigation for a nature-based solution.”

President of the UN General Assembly Volkan Bozkir urged countries to step up funding for forest-based solutions to the climate, biodiversity and pollution crises.

“Currently, forests and agriculture receive less than 3 percent of climate finance but hold more than 30% of the solution to the climate crisis,” he said.

“For an estimated $ 2.7 trillion per year, comfortably within the scope of the proposed COVID spending, we could transform the world’s economies by restoring natural ecosystems, rewarding agriculture that keeps soils healthy, and incentivising business models that prioritise renewable, recyclable or biodegradable products and services.”