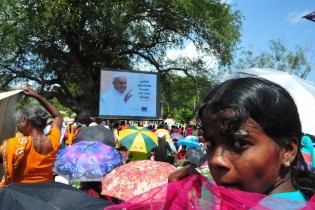 By Amantha Perera
As Sri Lanka steadfastly refuses any external inquiry into human rights abuses allegedly committed when the government pushed a military victory over Tamil rebels in its decades-long sectarian conflict, right groups say the global community is left with no option but to push for an international investigation.

By Samuel Oakford
Seated at a desk piled high with court documents and yellowed newspapers, Visvanathan Rudrakumaran remembers leaving Sri Lanka and coming to New York for the first time, three decades ago.

By Amantha Perera
True democracy at last or a toothless tiger propped up to appease unfavourable international opinion? As Sri Lanka’s Northern Province got its first council after an election last month, many in this South Asian island nation were mulling this conundrum.
ADVERTISEMENT ADVERTISEMENT