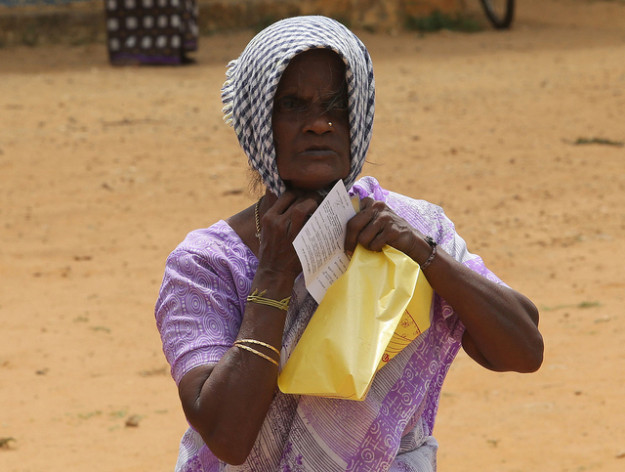 A woman walks to a polling centre in northern Jaffna in Sri Lanka. Credit: Amantha Perera/IPS

DHARMAPURAM, Sri Lanka , Oct 14 2013 (IPS) - True democracy at last or a toothless tiger propped up to appease unfavourable international opinion? As Sri Lanka’s Northern Province got its first council after an election last month, many in this South Asian island nation were mulling this conundrum.

For Tamil people long demanding a say in their affairs and emerging from a bitter and bloody 26-year war where the rebel Liberation Tigers of Tamil Eelam (LTTE) fought the government, the victory of the Tamil National Alliance (TNA) is an encouraging start. The five-party combine won an overwhelming 30 seats in the 38-member Northern Provincial Council (NPC) in the Sep. 21 election.

“We need to live with our rights,” Christine, a voter from Dharmapuram in Kilinochchi district told IPS. “That was the only thing on my mind when I went to cast my vote.”
How desperate the people are for democracy and normalcy was reflected in the 68 percent turnout among the 719,000 registered voters in the area. But will the NPC live up to Tamil expectations?

Sri Lanka’s existing councils are widely considered to be a drain on its national resources. The government spent 17 percent or about 1.03 billion dollars of its GDP of 5.9 billion dollars on the maintenance of provincial councils in 2012, according to central bank figures.

“Provincial councils have not achieved anything anywhere in this country,” Subramanium Sudhaharan, a voter from Dharmapuram, told IPS as he walked out of the polling booth. “To me all this voting is symbolic.”

“It is no secret that most become provincial council members to use their position as a stepping stone to enter parliament and hence they hardly get involved in development activities,” an editorial in the journal of the Organisation of Professional Associations of Sri Lanka stated.

The NPC could turn out to be different, as it is the only council which is held by the opposition. “For the Tamils, the election means the full implementation of the 13th Amendment,” declared Abraham Sumanthiran, a TNA parliamentarian.

Sri Lanka’s provincial councils were a result of the 1987 Indo-Sri Lankan accord which led to the 13th Amendment to the constitution providing for devolution of power to provincial councils. While they came into existence in seven of Sri Lanka’s other provinces, the Northeastern council for the merged Eastern and the predominantly Tamil Northern Province proved to be a short-lived experiment.

On their part, the TNA leaders have said they will seek maximum devolution of powers, among them control over land and the police. Though included in the 13th Amendment, the Centre has never really parted with these functions. And President Mahinda Rajapaksa’s government has maintained it is unwilling to do so now.

“Security and land powers must remain with the Centre given the delicate political situation in the NPC,” defeated government candidate Sinnathurai Thavarajah told IPS.

The office of the governor is another curb on the council’s powers. Appointed by the president and the only official with executive powers, the governor can exercise his power through the council’s ministers, but can sidestep them and act through “officers subordinate to him” if he so wishes.

Without the governor’s approval, the council will be ineffective. Kumaravadivel Guruparan, a lecturer at the department of law in the University of Jaffna, told IPS, “The new chief minister has no significant fiscal powers to initiate any resettlement or livelihood programmes of his own. He will not even have control over the provincial public service which is legally firmly under the governor.”

The TNA’s avowed desire to go beyond the 13th Amendment is also likely to be opposed by India, which faces an election in 2014. Any compromise on the issue, Ramani Hariharan, a former intelligence head with the Indian Peace Keeping Force (IPKF) in Sri Lanka told IPS, will be perceived there as a sign of weakness. The IPKF was stationed in Sri Lanka between 1987 and 1991.

Sudhaharan too feels that the TNA is unlikely to get anywhere with its demand for more devolution, and should focus instead on trying to improve living conditions in the province.

The Northern Province remains one of the poorest, despite four years of peace and massive development projects estimated by the central bank to be worth over three billion dollars.

An evaluation of the province carried out by the office of the U.N. Refugee Agency in July this year found that over 40 percent of the 917 households surveyed in the province’s five districts had a monthly household income of 9,010 rupees (70 dollars), only about a quarter of the national average monthly income of 36,000 rupees (275 dollars).

“Even with its limited financial resources, the NPC can do quite a lot in terms of economic and social development, governance, establishing institutions that promote equal opportunities,” Muttukrishna Sarvananthan, who heads the Point Pedro Institute of Development based in northern Jaffna, told IPS.

The councils collectively received 1.1 billion dollars as funds from the central government in 2012, according to central bank data.

TNA stalwarts like Rajavarotiam Sampanthan have indicated that they will try to raise funds from the global Tamil diaspora. But even if they manage to do so, it is unclear how the TNA can spend such money bypassing the central government which controls all development and reconstruction work here through a special presidential task force set up in 2009.

All that the people of the province now want is for the council to help develop traditional income sources like agriculture, build new houses, and create new jobs. “We have suffered so long and got so little,” Janoshini Kadrigamapillai, a young woman from Kilinochchi, told IPS. “First let’s get the people to live a better life, and then we can talk of other things like devolution. We deserve to live better.”