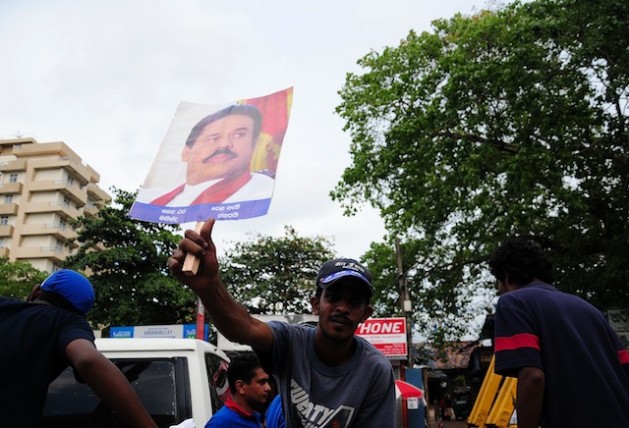 COLOMBO, Feb 20 2013 (IPS) - It has now become an annual affair. When the Geneva based UN Human Rights Council readies itself for the first of its annual regular sessions in February, the government in Sri Lanka gets ready to ward off yet another attempt to scrutinise its rights record.

Till last year, for three years since the end of three decades of bloody conflict, the government was successful in its endeavours to keep international pressure at bay. In March last year that changed, when the council adopted a resolution introduced by the  U.S. called on the government to act on the recommendations of the Lessons Learnt and Reconciliation  Commission (LLRC).  The commission was set up to investigate the conduct of the war and handed over its report to Sri Lankan President Mahinda Rajapaksa in November 2011.

The U.S. has announced it will introduce another resolution at this year’s Council sessions beginning Feb. 25.

Sri Lanka has clearly not liked the signals coming out of Geneva and from other Western backers of the proposed resolution. Navi Pillay, the UN high commissioner for human rights said in her report to the council Feb. 13 that the government had been selective in acting on LLRC recommendations.

“To date, the government has made commitments on only selected recommendations of the Commission, and has not adequately engaged civil society in support of a more consultative and inclusive reconciliation process,” she said.

Despite the resettlement of over 400,000 displaced by the war and large-scale road, water and power supply projects, the Pillay report said that there were still disturbing instances of abductions and other rights abuses. “Considerable work lies ahead in the areas of justice, reconciliation and resumption of livelihoods,” she said.

One of the underlying issues that caused concern in Sri Lanka last March was India’s support for the U.S. resolution. India had until then been supportive of the government’s effort to crush the separatist militancy spearheaded by the Liberation Tigers of Tamil Eelam (LTTE), and was also instrumental in preventing Western and European nations from moving against Sri Lanka at the UN.

India’s backing of the resolution was believed to be due to the Rajapaksa government’s slowness in devolving power to the Tamil minority, and the considerable pressure New Delhi was facing from the southern state Tamil Nadu. Once again, with elections nearing, the hand of the Manmohan Singh government in India may have been forced already to vote in favour of a new U.S. resolution.

“As of now India is likely to support the U.S. resolution provided it conforms to the long-term interests of India,” R. Hariharan, a former Indian intelligence officer who served as the intelligence head of the Indian Peace Keeping Force in Sri Lanka in the early 1990s told IPS.

“The U.S. will probably sound India which may result in some dilution of the wording,” he added. After the 2012 resolution Singh wrote to Rajapaksa to say that India worked to introduce an element of balance to the wording.

The Commonwealth Heads of Government Meeting is set to be held in Sri Lanka in November. Already there have been calls for a boycott, and what transpires at the Geneva sessions could set the tone for November.

However, a possible boycott would be largely symbolic. President Rajapaksa thrives on such international posturing, and projects himself as a strong-willed homegrown leader.

But rights activists and others told IPS that symbolic action, if sustained, could lead to long-term repercussions that may not be immediately recognisable.

Contending that a resolution and a boycott may not create any immediate changes on the ground, Ruki Fernando from Rights Now Collective said it nevertheless could “contribute towards longer term change.”

Commenting on a possible boycott, he said “such actions certainly send a stronger message than mere condemnatory statements.”

Lynn Yoshikawa, senior programme manager at the U.S.-based organisation Interaction, an alliance of U.S. aid agencies, said that major donors like the U.S. can set the trend for others.

“Major donors can also change the dynamics through sustained and joint diplomatic efforts, as well as through support to key civil society and aid actors who are working for change,” Yoshikawa said.

Interaction recently released the  report Sri Lanka: Transitioning From A Humanitarian Crisis To A Human Rights Crisis, that looks at the country’s recent rights and humanitarian assistance record.

Muttukrishna Sarvananthan, an economist who heads the Point Pedro Institute of Development based in northern Jaffna said that the U.S. and the UK were still Sri Lanka’s two most important trading and investment partners.

“The U.S. is the single largest source of portfolio investments in stocks and shares of  private companies in Sri Lanka and in government securities,” he said.

Despite China being the largest lender to the island, Sarvananthan said that the East Asian giant was neither a big investor nor a major export market. He also warned that Chinese loans came at high interest rates and insurance premiums.

“Foreign direct investments are largely from Asian countries, especially India and Malaysia. The flow of tourists to the country is dominated by Europeans particularly, British, French, and German. India is the single largest source.”

Sarvananthan dismissed claims that the island could weather a financial storm with Chinese support. “Sri Lanka’s foreign economic relationship is overwhelmingly dependent on the U.S., UK, other Western countries, and of course India.”